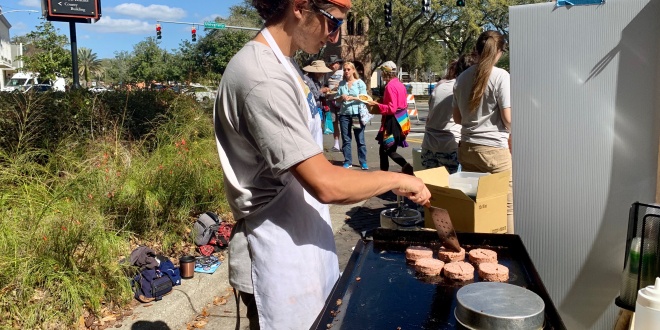 ‘I Feel The Difference In My Body’: Meat Alternatives Increasingly Consumed Amid Pandemic

Paula Mello has more time to cook and plan vegetarian meals now that she is back at home in Boca Raton because of the coronavirus.

Mello, 19, a sophomore English student at the University of Florida, said she often feels nauseous after eating red meat. Luckily, when she goes to fast-food joints with friends, she can order a plant-based option that mimics the real thing.

“I’ve been eating a lot healthier, just because it’s the only thing I can control or focus on throughout the day,” Mello said. “I’m happy that restaurants are getting other options.

Almost 40% of Americans now try to eat more plant-based foods, according to a Nielsen study from 2018. Last month, however, NPR reported that a recent Nielsen report found that the coronavirus had caused vegan meat sales to increase by 279.8% compared to the year before.

The Whole Foods Market in Gainesville has begun to recover from the initial mass buying in mid-March, but the meat alternatives section has been much slower to do so than other sections, said Mario Torres, the store’s manager.

“The process of creating these processed plant-based foods is very labor intensive for these companies,” Torres said in an email to WUFT News. “Whenever there is an event like this, or a hurricane, people tend to load up on these products because they have such a long shelf life.”

Torres said Beyond Meat – which sells a pack of two burgers for $5.99 and a brick of beef for $9.99 – has been one of Whole Foods’ highest-demanded items since the store opened two years ago.

Beyond Meat is a plant-based product that uses pea protein and offers its beef, chicken and sausage products at grocery stores. One of its competitors, Impossible Foods, uses soy protein.

Meat alternative and plant-based events have gained traction amongst Gainesville in recent years.

Seven hundred fifty people went to a plant-based junk food pop-up event in January at Cypress and Grove Brewing Co. that Vulture Food, a vegan restaurant from California, held in the city. It was the largest turnout ever for the event, said Vulture’s executive director, Osaze Sowelle.

The high demand had led Vulture to plan a second Gainesville event in March, but it was one of many events canceled because of the coronavirus.

Pita Pit in Gainesville added Beyond Meat to its menu in January, said its general manager, Austin Sharp. It does not sell as well as chicken, but it is still popular among vegetarian customers, Sharp said.

The Relish hamburger restaurant on Newberry Road is also still selling a plant-based Impossible Burger, but the University Avenue location is closed due to lost business from students and sports fans who must now stay away from UF, general manager Mariah Hernandez said.

More companies are catering to people who want to be vegetarian but are accustomed to meat.

Rakhu Lewis, 26, is a marketer and designer for Simple & Good, a pop-up vendor which typically sells meatless burgers at Bo Diddley on Wednesdays. He said customers can be skeptical about meatless burgers at first, only to be surprised that they enjoy them.

Lewis said he used to eat meat until deciding in 2013 to stop eating anything he would not kill himself.

“I feel the difference in my body,” Lewis said. “I have more energy and am less tired. I saw the change in my life, and I try to bring it to other people now.”

Connor Castelli, a co-owner of Dick Mondell’s Burgers & Fries in Gainesville, said his restaurant’s popular Impossible Burger accounts for about 15% of the sandwiches it sells.

“Most customers enjoy it, and some are convinced that it’s actually meat and not soy protein,” Castelli said.

He said many people ask to try the beefless burger because they heard about Burger King’s launch of the Impossible Whopper last year. He said the Whopper’s rollout was so successful, that it caused a three-month shortage of his restaurant’s Impossible Burger.

The plant-based industry is one of the fastest growing within agriculture. Since April 2017, total plant-based food sales have increased by 31%, the Plant Based Foods Association reported

Mitzkewich said he hopes the coronavirus will cause more people to see their health as a priority, and “something they will increasingly need to take control of in their own hands.”

He said he talks to more than 100 students in a day when visiting college campuses.

“I want to see a mostly vegan world in my lifetime, and I’m beginning to think it’ll happen a lot quicker than I realize,” Mitzkewich said.

Sarah Rotenberger, 21, a senior psychology and criminology student at UF, bartends at The Creek Pub and Grill in Turkey Creek in Alachua City. The restaurant began to offer Beyond Meat burgers as a vegetarian option last summer after downsizing its menu.

“Some older people turn up their nose at it,” Rotenberger said. “It’s a golf course community, so a lot of people have a die-hard, old-fashioned, meat-eater mentality.”

The people who order the plant-based burger, however, are thrilled by its taste, Rotenberger said, adding that she usually chooses to eat the burger as her shift meal because she likes it so much.

Taylor Fernandez, the studio manager at Yoga Pod in Gainesville, said she avoids plant-based meat products because of chemicals in them. A pescatarian for nine months – she eats fish but not meat – she prefers to make protein alternatives like tempeh or whole wheat seitan at home.

Fernandez, 21, said her husband Gabriel Fernandez, who holds a doctorate in metabolism and immunology, is also very health conscious, so they both carefully inspect the food they eat.

Plant-based meats have more sodium than regular beef, according to nutrient listings on the websites of companies selling them. An uncooked four-ounce beef patty has 74.6 milligrams of sodium; the Impossible Burger has 370 milligrams, Beyond Burger 390 milligrams.

But studies show that the meat substitute is healthier for the environment. Beyond Meat’s study with the University of Michigan’s Center for Sustainable Systems displayed that the production of plant-based meat generates 90% less greenhouse gas emissions, requires 46% less energy and has 99% less impact on water scarcity than a quarter pound of U.S. beef.

Gail Stallings, a retired special education teacher, said she wants to eat less meat to help the environment, but it is hard to find tasty vegetarian meals she can cook. Stallings said she buys products like Beyond Meat at supermarkets to satisfy her cravings for delicious vegetarian meals.

“I like them more than veggie burgers because of the spices they’ve added,” she said while walking around at VegFest. “I really like the umami flavor.”

Kyra Cortez, 20, a sophomore information systems student at UF, said she was excited to discover a vegetarian option that tastes exactly like a real hamburger. Cortez said she had convinced her friends to try it at some local restaurants, and was surprised by how open they were to it.

As a high school freshman in Richmond, Virginia, she traveled to a concert in Atlanta where supporters of the Virginia-based nonprofit People for the Ethical Treatment of Animals handed out pamphlets; it encouraged her to research vegetarianism.

“The more I looked into it, I knew I had to become vegetarian,” Cortez said. “My mom said I wouldn’t be able to go three weeks without eating meat – and it has been seven years now.”

Maya is a reporter for WUFT News who can be reached by calling 352-392-6397 or emailing news@wuft.org.
Previous DeSantis Putting Together Team To Address Economic Woes
Next Coronavirus Evening Update: DeSantis Expected To Announce Economic Plan Next Week