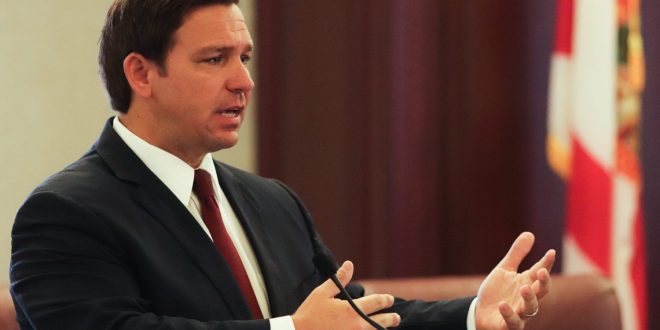 TALLAHASSEE — Florida’s governor disclosed late Sunday that two people had become the first in his state to test “presumptively positive” for COVID-19 and ordered his top health officer to declare a statewide public health emergency.

Gov. Ron DeSantis said in a statement that the cases arose in the counties of Manatee and Hillsborough. His announcement did not identify the individuals, specifics of their medical conditions or any routes of possible exposure. COVID-19 is caused by a member of the coronavirus family.

But the state Health Department said the Hillsborough patient had a history of travel to Italy, which has been among the countries hardest hit by the spread of the coronavirus outside Asia.

Authorities said the Manatee patient had not been in any of the countries currently identified for restricted travel by federal authorities.

State officials said both people sought health care and would be under isolation until cleared by public health officials. Both were identified as adults, though their ages weren’t released. Officials also tweeted that they are monitoring others who have been in contact with the two patients.

The governor’s announcement said he was issuing an executive order effective immediately directing the state health officer and surgeon general, Dr. Scott Rivkees, to declare a public health emergency in Florida. He authorized Rivkees to take “any action necessary to protect the public health.”

Rivkees subsequently said his department was moving ahead with those plans while “working directly with the Centers for Disease Control and Prevention” at the federal level and with local medical providers.

Rivkee’s own statement said the immediate steps were being taken “to ensure these individuals receive the proper treatment and that anyone who has come into contact with them is following the necessary protocols, limiting or stopping any further spread.”

The governor was expected to hold news conferences on Monday both in Tampa and Miami, said his spokeswoman, Helen Ferre.

The governor designated the Florida Department of Health as the lead state agency to coordinate emergency responses and to actively monitor all those with apparent or suspected infections for a period of at least 14 days — or until tests turn up negative.

The Florida developments came on a day when health officials in Washington state confirmed a second person there had died from the new strain of coronavirus — a man in his 70s from a nursing facility near Seattle where dozens of people were sick and had been tested for the virus.

It also came as state and local authorities around the country stepped up testing for the illness as the number of new cases grew nationwide, with new infections announced in Washington state, as well as California, Illinois, Rhode Island and New York.

The Florida health officials said in an email that labs in Tampa, Jacksonville and Miami can conduct the tests, which previously had to be sent to federal labs. They said that would mean results should be available 24 to 48 hours afterward — instead of within days.

“The most important thing is it will bring down the average testing time,” said Deputy Health Secretary Shamarial Roberson in a telephone interview. “It helps address this in a more efficient time.”

Florida officials had been awaiting approval for one component of the test from the Centers for Disease Control and Prevention, Roberson said. That approval came Friday.

Sunday’s announcement comes a day after health officials and DeSantis said no cases of the virus had been reported in Florida, but four people who may have been exposed in China and exhibited possible symptoms were awaiting test results. Another 15 similar people tested negative.

In addition, more than 150 Floridians who have returned from China but have not shown symptoms are being monitored until the two-week incubation period passes and asked not to have contact with others, the officials said.

For weeks, Florida health officials had declined to release information about possible infections, citing privacy concerns, but reversed themselves Friday amid mounting questions and political pressure to be more forthcoming to head off any public panic.

The development on the state lab testing was first reported by the Miami Herald. Florida had been waiting for federal officials to allow them to do their own lab testing.

The Associated Press is a wire service to which WUFT News subscribes.
Previous Gainesville Votes 2020: City Commission District 2 Guide
Next Pigs And Paint Raise $1,000 For Sanctuary Farm In Newberry