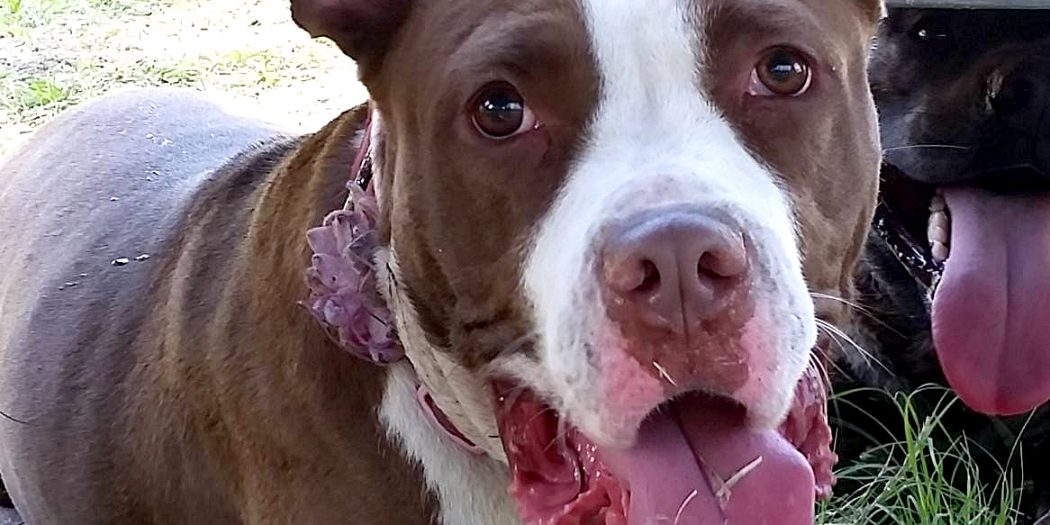 Sweetpea is one of 16 dogs were chosen for the Clay County Animal Services adoption tournament modeled after March Madness. (Photo courtesy of CCAS)

Sweetpea, the playful 2-year-old brown and white pit bull terrier, waits in her kennel for an adopter, like she has been for the past two months. Bursting with energy, she and 15 other dogs now have a better chance to get a permanent home.

As a creative promotion to encourage adoption, Clay County Animal Services hosted the Furever Home Sweet 16 tournament, modeled after March Madness. Animal Services chose 16 dogs for the campaign with the goal to get all 16 adopted by the end of March.  So far ten dogs have been adopted — more than half in the competition.

March was rough for Animal Services. Each week they were lucky to have more than two kennels available for the next inevitable rescues.

In January and February, Animal Services saw 228 dogs placed into their 79-dog-kennel shelter. In March, another 107 dogs filled the space. The shelter waived fees, extended hours and offered “pay-what-you-can” adoptions as incentives, but the initiatives were marginally successful.  A kill shelter by necessity, the county needed to quickly find a solution to free up space.

Animal Services interim director Troy Nagle proposed the tournament model and then showcased the initiative on their Facebook page. Fees for the competing dogs were reduced to $16 for the length of the tournament.

“Within a week we had everything set up and going,” said Courtney Sumner, program manager for the shelter. “It was fast because adoptions happen fast.” She and her team had to select the dogs quickly to move forward.

The team selected eight contestants as fast-track dogs and the remaining eight were some of the long-term residents at the shelter.  The long-term eight do not have behavioral issues, Sumner explained, but rather just need a little more attention.  She said that these dogs have special characteristics like needing a one-pet household, that cause people to see them as less adoptable.

“The eight fast-track dogs were chosen because they get people’s attention by their looks, what they could do or their adoptability,” Sumner said.

Sweetpea is considered a fast-track dog, but her kennel friend Creed is not.

Older additions like Creed, dubbed the “King” by the staff, is an 8-year-old pit bull mix whose scar-riddled body tells the story of second chances. Typically overlooked by potential adopters, the tournament let Creed get the attention he needed.

Sweetpea and Creed remain at the shelter, awaiting a home.

“The thing that surprised me the most was that some of our long-time dogs actually got the exposure,” Sumner said. “Some that we never thought would get the chance of adoption got adopted.”

Tasha Hyder, the general manager at the Clay County Fair, includes adoptable animals every year at the fair. Last year every animal got adopted.  This year Creed made an appearance to spread the word of the tournament.

Clay County Animal Services plans to host another championship soon, due to the popularity of the contest.

“The next one will be our NFL draft pick,” Sumner said. “We have already got dogs kind of lined up and they have jerseys.”

Selina is a reporter for WUFT News who can be reached by calling 352-392-6397 or emailing news@wuft.org.
Previous In Florida, There’s A Growing Need To ‘Respect Your Elders,’ And That Includes Gopher Tortoises
Next CRA Hopes Heartwood Will Be ‘Catalyst For More Investment’ In East Gainesville