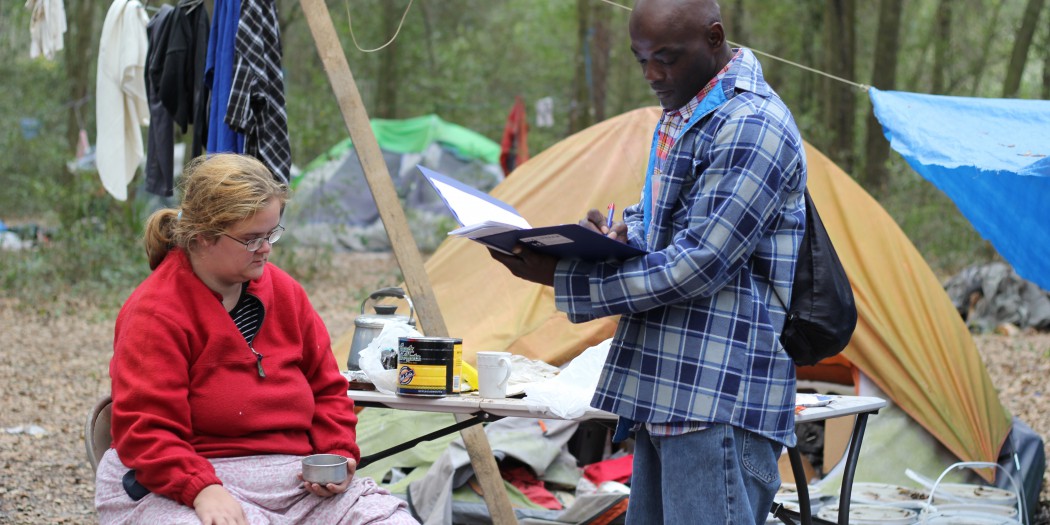 The Alliance conducted the point-in-time count during a 24-hour period Jan. 22-23. Mona Gil de Gibaja, the president and CEO of United Way of North Central Florida, said it isn’t clear whether the higher number of people represent a true increase in homelessness or simply better surveying. The count identifies individuals who are homeless, living in an uninhabitable place for humans, in an emergency shelter or a transitional housing program.

This year, she said, there were more people helping with the count and a law enforcement helicopter looking in the woods for homeless people.

“We mapped it out, and folks were sent to where (the homeless) were seen,” Gil de Gibaja said.

Levy and Putnam counties’ numbers remained relatively the same from 2018 to 2019, she said. Bradford County’s homeless number dropped from 33 to four people in the past year. Gilchrist County has had zero homeless reported both years.

The Alliance only included homeless people who live on the streets or in tents, excluding those in jail or the hospital. Those numbers rose in Alachua County from 709 in 2018 to 714 now.

Gil de Gibaja said the Alliance does not include those in jail or in the hospital because those individuals had a roof over their heads during the point-in-time count.

Jon DeCarmine, executive director of the Alachua County Coalition for the Homeless and Hungry, who conducted the point-in-time count in Alachua County for the Alliance, also included those who were in jail or the hospital and would be homeless after their release.

DeCarmine said there were 1202 homeless individuals, including those in jail and in the hospital, in 2014, meaning the 773 individuals identified this January reflect a 36% decrease in the past five years in Alachua County.

He said Alachua County is seeing an overall reduction in homelessness, with a sharp decrease in the number of veterans and chronic homeless, defined as someone who has been homeless for more than a year or repeatedly within one year.

Gil de Gibaja said chronic homelessness is down across all of north central Florida.

That is a decrease of 45% for the region. Of the 804 homeless in the five counties, 126 are veterans, and Gil de Gibaja said most of them are in Alachua County.

“The majority (of homeless) are in Alachua because that’s where we have most of our shelters and services,” she said.

Claudia Tuck, director of Alachua County’s Community Support Services department, said Alachua County has a contract with the city of Gainesville to share the cost of the Empowerment Center, which includes GRACE Marketplace.

In the 2018-2019 fiscal year, she said the county’s budget is $734,909 for the Empowerment Center. DeCarmine said the city and county split the cost equally.

“GRACE has a budget of about $2 million. Alachua County and Gainesville split about $1.5 million of that,” he said.

Tuck said the county uses a part of this money to place people in permanent housing. That money, she said, is being well spent.

“We receive money from the state and federal government, and we use this money to put people in permanent housing,” she said. “Many individuals are putting in effort to helping these people.”

Blake is a student reporter for WUFT and can be reached by calling 352-392-6397 or emailing news@wuft.org.
@BlakeTrauschke
Previous Apr. 17, 2019: Morning News and 90
Next Temporary Student Homelessness Continues To Affect UF Students