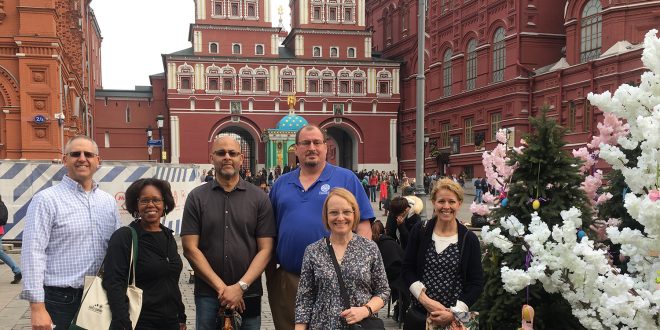 Santa Fe College now shares something in common with only 26 other community colleges across the country: national recognition for producing a Fulbright scholar.

The U.S. Bureau of Educational and Cultural Affairs recognized Santa Fe College as one of 26 baccalaureate/associate institutions in the nation to produce a Fulbright scholar. Dan Rodkin, associate vice president of student affairs at Santa Fe College, attended the Fulbright Community College Administrators Seminar in Russia in April 2018.

This is the first time Santa Fe has been recognized as a top Fulbright producing institution, and Rodkin is the third Fulbright scholar to emerge from the college in recent years, said Ed Bonahue, provost and vice president of academic affairs.

Rodkin attended the Russia seminar with five other community college administrators from the U.S.  The group traveled to Moscow, Kazan and Yoshkar-Ola and visited Kazan National Research Technological Institute, Innopolis University and Volga State University of Technology to learn about the culture and education system from the Russian faculty and students.

“One thing that was pretty universal is that when you get past the politics, education is education,” Rodkin said. “We’re all trying to do things to improve learning opportunities for our students. When we work together, we can accomplish quite a lot.”

Santa Fe College president Jackson Sasser implemented the Fulbright program shortly after his arrival in 2002. He interviewed for the president position exactly one week after the terrorist attack on Sept. 11, 2001. The political climate during that time was a key factor that motivated Sasser to initiate the program.

He was concerned about the safety of employees and students that practiced Islam. He selected a Fulbright scholar from Pakistan to be the college’s first visiting Fulbright, attending various classes, student events and trustee dinners.

“She was the example of the peaceful Islam, the practice of a religion that certainly is different from the Jewish religion and Christianity,” Sasser said. “That’s what I wanted not only students and employees to know, but our (community), too.”

“All of that exchange creates opportunity to share with students,” Bonahue said. “Whether it’s a visiting scholar who gets to present to students, and students get to meet someone from a different part of the world, or it means professional development for our staff that also comes back to students in important ways.”

A Fulbright scholar is a college or university faculty member selected for the Fulbright Scholar Program. Fulbright students are graduating college seniors or graduate students chosen for the Fulbright Student Program. The international exchange program awards 1,200 U.S. scholars and 1,900 U.S. students annually out of the 8,000 grants. Remaining grants are awarded to foreign students, visiting scholars from other countries, and teachers and professionals, according to the Fulbright website.

One of the main differences Rodkin saw was the level of formality in Russian classrooms. Students in Russia stand when a guest enters the classroom and interpret anything the professors say as the rule, he said.