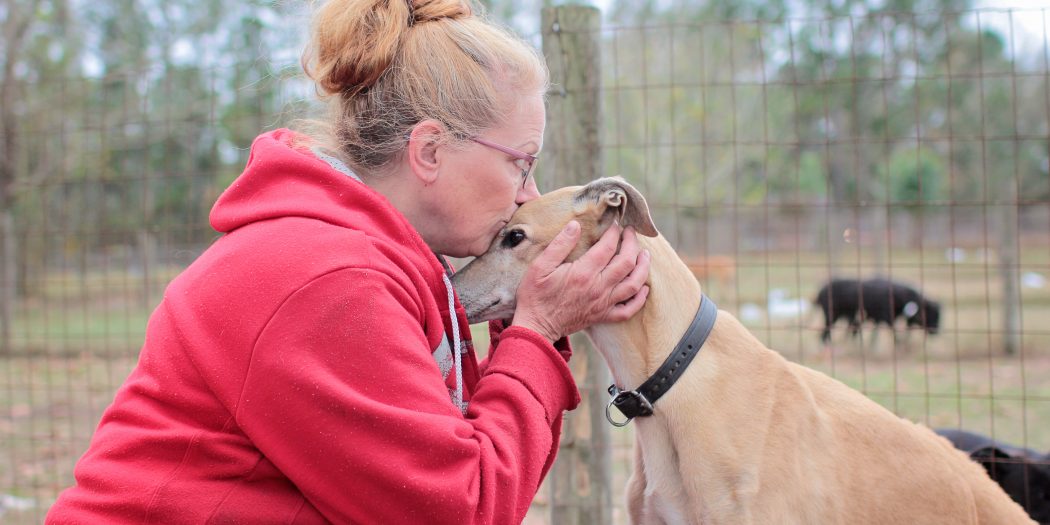 Greyhounds of every shade of brindle, black, red and white play and bask under a winter sun at Deborah Elliot’s farm. Her 140 dogs run free.

It was her dogs that kept Elliot going after her mother died unexpectedly. She wakes up at 4 each morning to prepare their food, clean up after them, and let the dogs in and out of their kennels.

Elliot greets each hound by name, even the ones that appear identical; Hansel and Gretel, Lucy, Ethel, Big Mac, Nugget, Muffin. Each time Elliot walks by, the dogs jump, eagerly wagging their tails. They all want just one moment with her.

Then there’s Ruffles, the grande dame of hounds. She’s a 14-year-old greyhound who, along with this farm, once belonged to Elliot’s mother.

It’s dogs like Ruffles that animal rights activists accuse greyhound trainers of throwing away. Greyhound racing has long been under scrutiny in Florida and, in November, activists were handed a victory at the polls. Nearly 70 percent of Floridians approved Amendment 13 which puts an end to greyhound racing in the state by the end of 2020. The constitutional revision is based on the “humane treatment of animals.”

Greyhounds are a regal breed of dogs that can run at 45 miles per hour. Betting on these fast dogs became a lucrative business in America, especially in sunny and warm Florida. It is one of six remaining states with active racing tracks and one of 11 where dog racing is still legal. Of the 17 operating racing tracks in America, 11 are in the Sunshine State.

Last year, greyhound racing generated $11 million dollars in state revenue, according to Jack Cory, a representative for the Florida Greyhound Association. But now, Amendment 13 could mean the end of an industry. From dog farms like Elliot’s to the tracks, the racing ban threatens the livelihoods of the 3,000 direct and 10,000 indirect industry employees.

Those who pushed for the ban argue that greyhound racing amounts to nothing short of animal cruelty. The protection group GREY2K USA alleges dogs are kept in cages for up to 23 hours a day, drugged and forced to race in extreme conditions. The group says thousands of dogs are injured every year and that a dog dies every three days at a Florida racetrack.

“Change is hard, but our economy should not be built on cruelty to dogs,” said Christine Dorchak, president of GREY2K.

While animal welfare has become an increasingly hot political issue, some argue Amendment 13 was all about emotions winning out over the facts.

Parker adopted his first greyhound in 1994. Four months later, he adopted another. He loved the dogs so much that he launched the Southeastern Greyhound Adoption group, which finds new homes for 125 retired greyhounds every year.

At first, Parker assumed greyhound racing was cruel. At the time, he said, there wasn’t a lot of literature available and most of it was negative. But the more greyhounds he met, the more he was convinced that they were hardly neglected or abused.

Parker began visiting kennels and felt that the dogs were happy to be doing their jobs. He believes that interest groups have used heart-tugging PR strategies and advertisements to sway the public.

Even now, he said, there’s a lot of confusion about what will happen to the 3,700 greyhounds that race in Florida. There have been reports of dogs that will become homeless or be euthanized because of the demise of the racing business. But Parker said the opposite is true. He said as breeding operations slow down, his group is experiencing a shortage of dogs available for adoption, and Amendment 13 has already caused a spike in applications.

The transition will be expensive. Trainers and kennel operators use the money from racing to care for the dogs. But Parker said adoption groups will now have to step in.

“It’s going to cost money,” he said. “But I’m confident the money will be there.”

There will be at least one more season of greyhound racing in 2019. Those in the racing industry are hoping the ban will be reversed. So is Elliot.

But no matter what, Elliot hopes business will continue, as it has for 80 years. She bred a litter just a week after the election. She will race them in Florida while she still can.

But the future is uncertain. Elliot worries for her employees as times get tough. One lives on the property with her disabled husband; another is a mother of five.

“There are five full time people here that the state of Florida decided don’t need jobs,” she said. A former nurse, Elliot will most likely get a second job at a hospital to maintain the kennel.

Still, Elliot doesn’t blame voters. Their hearts are in the right place, she said. They want to help dogs. But she does blame welfare groups like GREY2K who play on emotions to gain votes and donations.

GREY2K’s Dorchak fired back that people at least have an option to find other jobs. The dogs, she said, have no choice in “suffering.”

But there is little evidence of suffering at Elliot’s farm. The dogs aren’t captive. They live outside once they are old enough. Until six months, they live in smaller runs in groups of two to four. After six months, they move to 650-foot runs. The dogs are trained to return to the front of the run by getting a homemade meatball each afternoon.

Elliot is aware of the allegations of drugging and other mistreatment. While she acknowledges that small amounts of testosterone are used as birth control, she says it has nothing to do with increasing racing ability. As a former nurse, she knows the harmful effects other drugs could have.

Racing dogs, she says, are an investment; trainers want a return on that investment, so they have no reason to harm the dogs. She said she would immediately remove her dogs if they were being mistreated by a trainer at the track.

Many of the dogs are adopted once they are done racing, though some come back to live with her.

She has placed a few personally; others have found homes through a trusted agency. One of her former racers was adopted by an elderly couple – he acts as a caretaker, checking on them each day. Another is an emotional support dog for a Gulf War veteran.

But it can be hard for the dogs at times. At a farm like Elliot’s, they are never separated from their litter mates, and they roam free outside. It can be hard to adjust to adoptive homes. And if they return to her, she spoils them. Like Ruffles.

“Whatever she wants, she gets,” Elliot says.

She takes stock of her farm, surrounded by the speedy hounds she has lovingly bred and raised.

She has a litter that’s not yet six months old. She’s particularly proud of one of the puppies.

His name is Chilly, a brindle who is a bit smaller than his brothers and sisters. He is the runt of the litter; she wasn’t sure he could make it.

“But he had the heart,” she says, smiling as he leaps up at the fence. He might be Elliot’s best dog yet.

Tobie Nell Perkins is a general assignment reporter for WUFT. She can be reached at news@wuft.org or (352)294-6397
Previous Peak Florida
Next FWC: Suspects Used Dogs To Attack Florida Black Bears