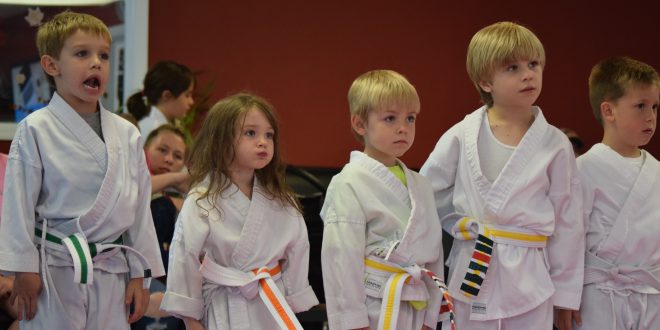 Children in the 6- to 12-year-old class at Star Martial Arts prepare for class to start. Star is one of at least 18 martial studios in Gainesville but has a component that makes it particularly distinct: catering to children with intellectual disabilities. (Darcy Schild/WUFT News)

As the sun sets on a business plaza off Newberry Road in Gainesville, people retrieve their dogs from the pet day spa and couples walk out of the Japanese hibachi grill.

Some crane their necks to peer through the glass window of the plaza’s martial arts studio, which is filling the parking lot with the sounds of screeching and laughing — and the occasional ring of a gong.

“Yaaaaaw! Yaaaaaw!” the eight or so youngsters yell from inside Star Martial Arts, and then they laugh.

Star is one of at least 18 martial arts studios in Gainesville, but it has a component that makes it particularly distinct: catering to children with intellectual disabilities (though it doesn’t advertise itself as such, and students of all abilities are welcome).

“The coaches take each student in with open arms and say, ‘Let’s see how we can help each child,’” said Kay Walker, whose two kids, one of whom has ADHD, have taken classes at the Northwest 60th Street taekwondo studio since 2014. “Other children there have similar kinds of issues, and it’s amazing how [the coaches] can make it a personal experience for everyone, no matter their needs.”

Other intellectual disabilities among Star enrollees include autism and down syndrome. The studio’s atmosphere is meant to provide them — regardless of their age or ability — with a sense of hope and empowerment.

Walker said it has been especially transformative for her child with ADHD. Prior to starting lessons, her son had problems with focus, physical stability and balance, and socializing, she said. But three years after starting, she has noticed more concentration, bodily coordination, and interaction with other children, which she attributes to the “sense of family and community” at the studio.

Such an environment is what Edwin Gnad, a practitioner of martial arts for much of his life, hoped for when he founded Star in 2006.

“My vision was to fill a void in the community by creating a school dedicated to inclusivity and positivity,” the 47-year-old said. “We have families from all walks of life who come here, and the students are at all levels and abilities.”

Gnad said he doesn’t know exactly how many of the 201 current enrollees have a disability.

“Every one of our students is here for a different reason,” he said. “The lifestyle of martial arts can impact people in so many different ways.”

Students are separated based on age and physical experience with taekwondo, not strength, weakness and mental ability. Among the beginner class’ participants is 5-year-old Shaun Scott, who is academically gifted and skipped a grade in school, said his dad, Shaumond.

“It’s a good experience for him to not only learn something he really enjoys,” Shaumond Scott said, “but to do it with a bunch of different kids with different personalities and behaviors is making him even more compassionate.”

Strengthening the mind and body

Taekwondo — Korean for “the art of kicking and punching” — and other martial arts carry social and mental benefits for children, Gnad said, but they also have the more obvious physical perks.

The physical factor becomes an especially important one for children with autism because they’re more likely to struggle with obesity, according to a study published in 2015 in the journal Pediatrics.

Autism exists on a spectrum and can present a range of different challenges and behaviors. It is the fastest-growing developmental disorder in the U.S., according to Centers for Disease Control and Prevention.

Some people with autism could have trouble functioning in social or academic settings, while others may have difficulty in other areas, like communicating verbally.

Children with autism are at risk for becoming obese — more so than children in general — because they typically default to sedentary activities and unhealthy foods, said Tim Vollmer, a University of Florida psychology professor who specializes in autism and developmental disorders.

In addition, some children with autism and other intellectual disabilities may take medications known as atypical antipsychotics, which contribute to obesity and diabetes, Vollmer said.

“It’s like a triple whammy, I call it, because the kids are interested in sedentary activities, they’re eating poorly, and some of them are on medications that make you fat,” he said. “All three of those things work against them.”

Hear reporter Darcy Schild discuss this story on this week’s The Point podcast.

In response, psychologists are searching for ways to get these children more excited about exercise, Vollmer said. And learning a skill like martial arts in a welcoming environment could be a solution, depending on the child’s interests, he added.

“One of the things we’ve discovered is that we really need to get these kids to be more active,” he said. “So when I hear about programs like [the ones at Star], I think, that’s one way to encourage families to increase their child’s activity or at least to sample out and see if they find it to be preferred.”

If they prefer the activity, children with autism or ADHD will only benefit from it, Vollmer said.

“There is some research with kids with ADHD that shows when the activity is highly preferred, they can focus for pretty long periods of time,” he said. “So if the child takes a liking to the coaches or a personalized style of teaching at a certain studio … that’s when you could see benefits like greater self-confidence and greater focus.”

To help with comfort among participants, Star provides family classes (ones taken by both the parents and kids).

Children’s behavioral issues may keep a family from doing things together, Vollmer said, but if family members have the opportunity to partake in the child’s preferred activity, it’s a win-win for everyone.

“Not all communities have a place where a family with a child with autism or ADHD can bond and have a shared experience that’s preferred,” Vollmer said. “Having a mutual class where the parent and child can experience some preferred activity together is analogous to pursuing goals together. … It’s part of a positive family experience.”

Wearing a black uniform held together by a black belt around his waist, Star coach Josiah Gill stands in front of his taekwondo students, who are 4, 5 and 6 years old. Behind him is a gong, which he and the other coaches sometimes ring to signal the beginning or end of a session. Gill bows and tells his students, “We can be confused. Challenge is OK.”

Gill struggles with ADHD and dyslexia. He said he began taking karate lessons at age 6 because his parents hoped it would help with his symptoms.

When Gill first started learning martial arts, it wasn’t his preferred activity. But he said that once he understood how martial arts could translate to life outside of class, his focus and self-esteem improved.

The now 20-year-old uses these personal experiences to guide his kid and teen students, teaching them how to focus and gain control of their actions and thoughts.

“When you’re struggling with a diagnosis like ADHD, you’re getting messages all the time that you can’t do things, and you start internalizing those negative messages,” he said. “I know how to coach these kids because I understand their frustration with not understanding a certain move or pose right away.”

For example, when Gill notices a student not focusing on the skills being taught or is distracting others, he pulls the child aside and engages her or him in a different activity. This could be learning a new taekwondo skill or simply having a conversation, during which he asks the student about how things are going at school or if she or he is worried about something that would cause mental distractions.

“To help my students gain a sense of control in their lives is amazing,” he said. “You see them become who they really want to be instead of being bogged down by their own limitations.”

Behaviors commonly associated with ADHD include inattention, hyperactivity and impulsivity. Gill said that, as a child, learning kicks and poses that require agility and focus helped to alleviate these symptoms.

As he improved his skills and moved up in the belt ranks, going all the way up to black belt, Gill developed a greater appreciation for the values of martial arts.

“If you’re just kicking and punching at things, it’s not going to help much. But it’s a lifestyle,” he said. “The word that martial arts comes from [in Japanese] is jitsu, which means religion or lifestyle.

“The life skills of martial arts, like equality and leadership — when they’re coupled with the confidence you get in yourself by doing the moves, it’s like nothing else I’ve ever seen.”

Gill said that more often than not, the most important part of being a martial arts coach isn’t teaching skill after skill. It’s being a mentor and a role model.

“Lessons on the mat can translate to life off of the mat,” he said. “And that’s what’s helping us build a better community.”

Darcy Schild is a University of Florida journalism student and reporter for WUFT News. She can be reached at darcyschild@gmail.com or at 419-239-9411.
@darcyschild
Previous UF Combating Carbon Footprint With Sustainable Transportation
Next Nov. 2, 2017: Morning News In 90