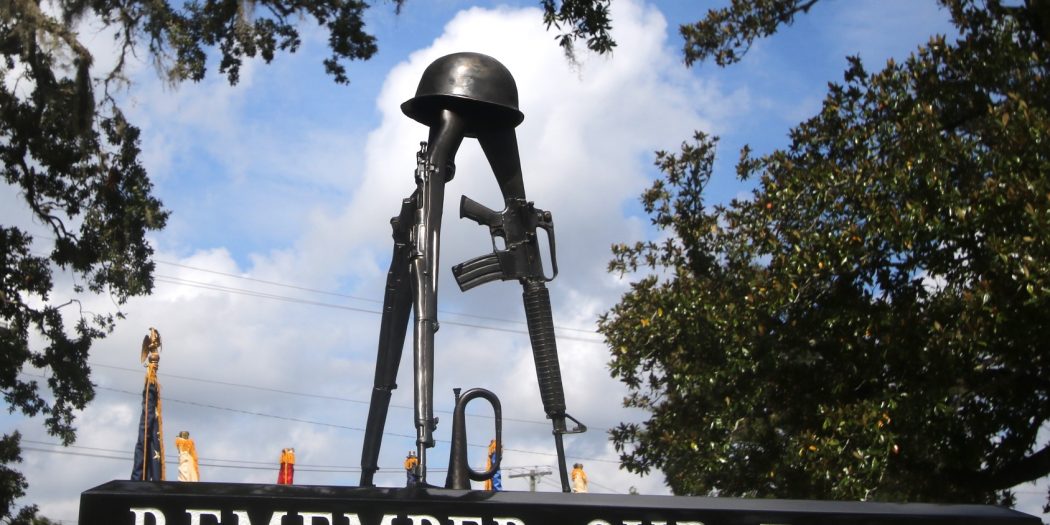 By Ethan Magoc and Zach Oliveri

Newman has since 2015 led an $82,000 fundraising push for the TAPS Monument, which was unveiled Monday at 915 Walnut St. in Green Cove Springs. The monument lists the names of 66 veterans and Clay County natives who died in conflicts from 1862 to 2012 — spanning the Civil War, World War I, World War II, Korea, Vietnam, and the Global War on Terrorism.

At least a dozen surviving family members of some of the deceased were there Monday.

“People can come here and sit and reflect and look at their family member’s name, and bring up good memories from the past,” Newman said. “This is our TAPS committee gift to you.”

Newman led the committee that raised the money, all of which came from private donations.

That doesn’t mean he skirted local government approval, as the area outside the old Clay County Courthouse where the monument stands is a historical site, requiring an archaeological study. Newman’s group also required City of Green Cove Springs approval because it’s within city limits. Finally, Clay County commissioners had to sign off on the project because the grounds are county property.

“From there on, it was full steam ahead,” he said. Newman served in Vietnam and is president of the Vietnam Veterans of America Clay County Chapter 1059. The black granite in the monument comes from the same quarry as the granite used in the Vietnam Veterans Memorial in Washington, D.C.

Clay County District 5 Commissioner Gayward Hendry also spoke at the dedication, calling the veterans honored on the monument “our boys — Clay Countians, one and all.”

He and Newman noted the monument is as much for fallen veterans of the past as those who might die serving the United States in the future.

“We’ve left the other side blank,” Newman said, “for a reason.”

These are the names on the TAPS monument in Green Cove Springs:

Ethan is a journalist at WUFT News. He's a Pennsylvania native who found a home reporting Florida's stories. Reach him by emailing emagoc@wuft.org or calling 352-294-1525.
Previous Gainesville Community Playhouse Brings Together Local Theater Enthusiasts
Next Oct. 9, 2017: Afternoon News in 90