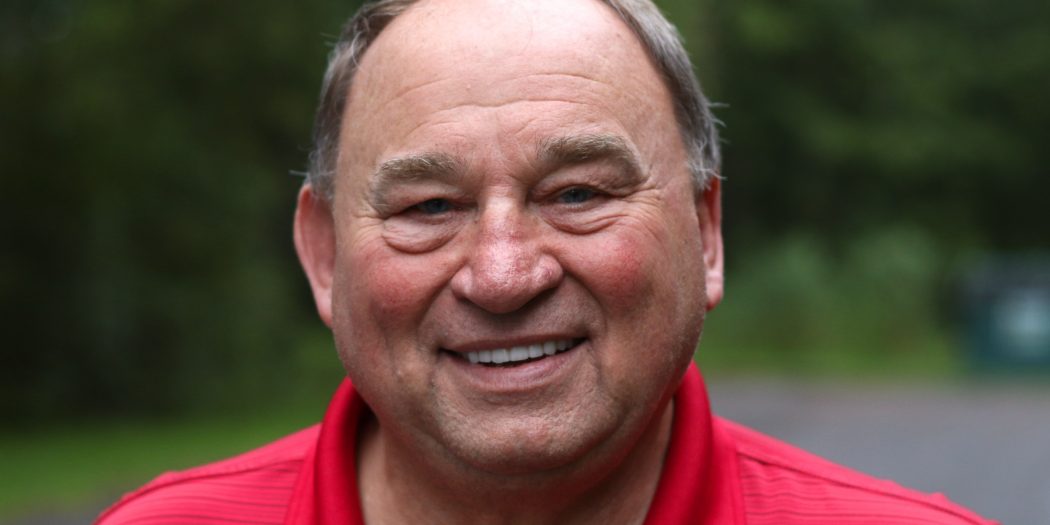 With the name of John Wayne Edwards, there were times as an Army soldier on patrol in the jungles of Vietnam that he felt invincible. Edwards was twice wounded and is a Purple Heart recipient. Today, he says he maintains his pledge to God made in a firefight in Vietnam: He would never own a weapon. Edwards is a member of the Vietnam Veterans of American Chapter 1092 Alachua County, and our conversation took place at their monthly meeting on Aug. 28, 2017, at American Legion Post 16 in Gainesville.

My name is John Wayne Edwards. I was born in Carthage, Missouri, in 1948.

I graduated high school and went to college on a full Lions Club scholarship, playing football. Because of my dad’s service, I decided against his protest that I would drop out of school and go to Vietnam. He was a lifer in the service, in the Army.

I got real good training — went to Fort Polk, Fort Benning, Fort Bragg…then to Vietnam in 1968. If you could breathe, they’d send you to Vietnam at that time. I had mixed feelings about Vietnam, but I thought it was worth the adventure, you know?

What were some of your first impressions there?

We landed in Cam Ranh Bay. They put us down on the beach in tents with no weapon. I was swimming in the South China Sea. I’m thinking, ‘This whole thing is a big farce. There’s nothing going on. I’m swimming.’

How long did that last?

About a week. They had some people that got killed. They snuck up on the beach and did some damage. They gave us weapons then. But basically I was waiting to be called to my unit. It was quite an experience. At first, I thought, no this is not really going on. Then I went out on the LZ, started going out, and we were in some stuff a lot.

I wanted to fly choppers while I was in ‘Nam. That’s what I wanted to do, but I’m color blind. Like the Army always does, they gave me a job of… reading maps, and it’s all colors. Hills, valleys, you name it. Brown, yellow, green. I did that the whole time I was there. Me and my RTO (radiotelephone operator) whose name was Bill Powers — we called him ‘Flower Power’ because he was a hippie soldier — great, great soldier. Always had my back. Had the best sense of humor in the whole world and could play a Vietnamese guitar better than anyone I’ve seen in my life.

What makes a hippie soldier?

A hippie soldier is one that’s complaint to them, to the higher up, but otherwise, he’s freestyle. He had a great sense of humor. If you can imagine being in a firefight… This lieutenant wanted to walk point. They said, ‘No, you can’t walk point. We have a person who’s very good at that from the Appalachian Mountains. All he’s ever done is hunt, fish, he could smell them (enemy soldiers).’ We said, ‘You can walk number three.’ There were eight of us. We get out, walk under this guy — this Vietcong. Real bad mistake. We get out about 300 meters. His other buddy starts pinning down our first three guys with this lieutenant. This is Flower Power’s humor. The lieutenant’s going, ‘Get that radio up here!’ We’re back in five and six, and he says get that radio up here. (Powers) says, ‘If you want this radio, come back and get it.’

I talk to Flower Power every month. He lives on the west island in Hawaii. He’s a guitarist and entertainer on cruise ships. He’s played with some biggies. He’s a year older than me, but that’s all he’ll do the rest of his life is cruise the Pacific.

Do you recall your first contact with the enemy?

We’d usually go out and patrol three days, come back in, sleep a while, go back out. That was common. The longest period we were ever out was 26 days. We were chasing some people.

Did you find them?

Oh yeah. Yeah. There was a Catholic church out in the middle of nowhere in the jungle. There was a Philippino nun, an American nun, couple of Vietnamese nuns. They let us eat with them. They fed us that night… We left and came back two days later and the Vietcong had come in — and because they had helped us or fed us —cut their noses off, raped them, killed them. They know that Americans were very vain, so they knew that would really agitate us. We started tracking them. There were eight of us. We think there were probably 35 or 50 of them. They realized after we’d gone so far that they thought they could take us. They started chasing us, so it was a day and night thing, running from them, and we’re calling for our people.

How far out are you at this point?

About three or four clicks (three kilometers). We called line company. The line company set up a wedge. We ran them through the wedge, and they caught them in a crossfire and got all of them. We usually traveled eight, with a dog.

A police dog. His name was King… Basically, if you take a prisoner, it was a lot easier to tell King to keep an eye on him. Take him up, put their hands behind them, lean him up against a tree. If they moved, blinked an eye, that dog was right there. They were scared to death of a police dog.

One of you was a handler?

Yeah. You could talk to that dog like a human being. He knew what a rifle was. A weapon. He just knew. Often, we’d be back in the LZ, playing tricks on him and stuff. We’d catch the handler asleep and we’d tell King, ‘Bring us his weapon.’ That dog would go grab the sling, draaaag the weapon over to us, and then we’d all jump up and yell, ‘INCOMING!’ He’d be looking for his weapon, looking for anything, you know? It was pretty wild.

You had to keep some kind of sense of humor, decency about things, you know? It’s hard, just the stupid things that went on. Marijuana growing everywhere. And don’t think people didn’t smoke it. You lived every day like it was your last day. But you also had this sense that, I’m John Wayne. That’s my name. I’m invincible, you know?

My mom — every letter I sent her, she kept as if it was the last letter she’d get from me. When I got home from Vietnam, she had a great big box with all the letters in it. She said, ‘I just always thought that that letter would be the last letter I’d get from you.’

You always feel very guilty. I feel guilty today. These guys made it back, and if you went around the room and ask them, a lot of them would say, ‘Why me? Why didn’t I…?’ I made a promise to God in a situation, in a firefight I was in over there, that I would never own a weapon other than a knife to bring harm to anybody, and it would have to be a direct threat to me, my wife or my kids. I was an avid hunter, raised on a farm, always had a .22 (pistol), a .30-06 (rifle) that I was taking out in the field when I’d go get the cows. Shoot snakes, squirrels. My mom was very religious and she instilled a thing in us about never kill anything unless you’re going to eat it. Then you go to Vietnam, and you were trained. This is all you do do.

Did you keep that promise about the weapons?

Oh yeah. You couldn’t give me a weapon. But if anybody comes in my house, they better know how to fight. I can whittle a person up pretty good with a knife. I’ve got a pretty good one. I brought stuff back home.

How did the war change you? Did it?

The biggest thing is a greater respect for life itself. We, as a unit, first we’d take prisoners and send them back up north for interrogation. We had South Vietnamese ARVNs to interrogate for us. I can speak a little Vietnamese, but we lost one of our guys over one a prisoner, so we just wouldn’t take any more prisoners… I talk to a lot of guys who feel real guilty that they didn’t have to go to Vietnam — ‘I had a deferment’ or something like that. Great. You know? Great.

My mom, when she took me to the airport in Oklahoma City, to Tulsa, pulled out $3,000 in cash. She said, ‘Johnny, you can fly anywhere in the free world with this money. When you get there, give me your address, and I’ll send you more.’ I said, ‘Why would I do that? I might never get to see you again. I might never get to come home again. What would my dad think?’ She said, ‘Forget that. He’s a white man. I’m an Indian.’ My mom was Cherokee Indian. I said, ‘No, I can’t do that. I’m going.’ I don’t know if it’s the smartest decision, because of my wounds, and I’ve had a lot of trouble.

When were you wounded?

I was twice wounded and awarded the Purple Heart… Silver Star was award on the 4th of July 1969 for heroism in connection with ground operations against a hostile force… I also got a National Defense Medal, Bronze Star — I got two of those with a ‘V’ device and an Army commendations medal.

(Displays a picture of himself) That’s me. Eating c-rations.

How many of those would you guys take out on a three-day tour?

As little as possible. We didn’t wear helmets. We didn’t take ponchos. We traveled as light as we could. Usually a canteen of water and three meals of some kind. Then they had LRP rations (Long Range Patrol). Our LRP rations were dehydrated food. One LRP ration could feed three guys. But you had a problem because you had to heat it. You had to figure out a time you could use it, because being in the jungle like that and getting spotted…

Because of Agent Orange, I don’t have any children of my own.

Because of Agent Orange, I don’t have any children of my own. We adopted four children. Now I’ve got eight grandchildren and six great grand children.

You were exposed fairly often to Agent Orange?

The first thing they told us when we landed in Seattle-Tacoma Airport: ‘Get your military clothes off, get your civilian clothes on.’ They wouldn’t land us until about 2 or 3 in the morning when air traffic was down and not so many people at the airport. Wear civilian clothes. Don’t show your military papers unless you have to. We got free flights and stuff like that. Just get out of there. Get to the airport, get off, and go home. Forget about it. I didn’t have anybody personally come at me, but I had friends that have.

What about when you get home?

My mom was a very religious woman. The first thing she ever told me was, ‘Johnny, you’re not the same as you were when you left.’ I said, ‘Well, probably not.’ She said, ‘You just haven’t acted right since you’ve been back.’