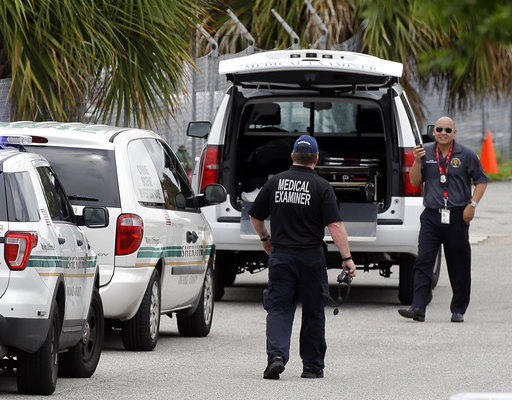 Members of the medical examiners office arrive at the scene of a shooting where there were multiple fatalities in an industrial area near Orlando on June 5. The Orange County Sheriff's Office said on its official Twitter account that the situation has been contained. (AP Photo/John Raoux)

Sheriff: Disgruntled Ex-Worker Killed 5, Then Himself In Orlando

A man who was fired from a Florida awning factory in April returned Monday with a semi-automatic pistol and methodically killed five people, then took his own life at the sound of an approaching siren, authorities said.

Orange County Sheriff Jerry Demings identified the shooter as John Robert Neumann Jr., a 45-year-old Army veteran who lived alone and did not appear to be a member of any type of subversive or terrorist organization.

The shooting began at about 8 a.m. after Neumann slipped through a rear door into the cavernous factory, an area larger than two football fields where awnings are stitched together for recreational vehicles. He paused at least once to reload.

“My experience tells me that this individual made deliberate thought to do what he did today. He had a plan of action,” the sheriff said. The gunman “had a negative relationship with” at least one of the victims.

“He was certainly singling out the individuals he shot,” Demings said, adding that most victims were shot in the head. Some were shot multiple times.

The motive remains under investigation. Deputies cordoned off the gunman’s mobile home in Maitland, north of Orlando, and were looking through any social media postings for clues. Neumann was honorably discharged in 1999 and did not have a concealed weapons permit, the sheriff said.

Arnie Boyd, who lives in the same trailer park, said Neumann wasn’t particularly social. “Every once in a while, he would ride his bike around and that’s it,” Boyd said. “We would speak only once in a while.”

Authorities had confronted Neumann once before at the Fiamma Inc. awning factory, when he was accused of battering a co-worker in June 2014. But after interviewing both men involved, deputies filed no charges, Demings said.

Neumann’s previous criminal record was otherwise minor — marijuana possession and driving under the influence — and the co-worker he allegedly beat up three years ago was not among Monday’s victims, the sheriff said.

Fiamma calls itself one of the largest manufacturers of awnings for camper vans, motor coaches and sport utility vehicles.

Shelley Adams said her sister, Sheila McIntyre, called her from the company’s bathroom during the shooting and kept repeating, “My boss is dead. My boss is dead.”

State and federal law enforcement officers converged on the awning business in an industrial park in Orlando shortly after 8 a.m. after a woman ran out and called 911 from a tile business across the street, said Yamaris Gomez, that store’s owner.

“All she kept saying was he was holding a gun and told her to get out,” Gomez said.

And while five people were killed, “seven others’ lives were saved due to the quick actions of the officers who arrived on the scene today,” said Special Agent Danny Banks of the Florida Department of Law Enforcement.

Authorities had no reports of any specific threats the gunman made to people at the company or anyone else, Banks said.

The attack shows why people need to alert authorities whenever they learn of anything that could lead to violence, Banks said.

“If people see something that seems abnormal, they need to say something,” Orange County Mayor Teresa Jacobs added.

Sen. Bill Nelson called for more action to address mental health issues. He noted that next Monday will mark a year since the worst mass shooting in modern U.S. history, at a gay nightclub in Orlando. The attack at the Pulse club killed 49 people and wounded dozens more.

“The city of Orlando, which is still healing from the Pulse massacre, has seen too much violence this past year,” the Florida Democrat said in a statement.

Republican Gov. Rick Scott asked “all Floridians to pray for the families impacted by this senseless act of violence.”

The Orange County sheriff’s office says it hopes to identify the gunman in a workplace shooting near Orlando at its next briefing this afternoon.

The briefing is planned for 1 p.m. Monday.

In a news conference, Sheriff Jerry Demings called the shooting that left four men and one woman dead early Monday a “tragic incident.”

“It’s a sad day for us once again in Orange County,” he said. “Our hearts and prayers go out to the families of the victims.”

Demings says the shooter, described as a 45-year-old disgruntled former worker at the awnings manufacturing plant, also shot and killed himself.

Authorities say five people have been killed in a workplace shooting near Orlando.

Orange County Sheriff Jerry Demings said during a briefing Monday that the gunman was a disgruntled former employee who was fired in April. Demings says the gunman shot and killed himself. The sheriff says the shooting is not believed to have any link to terrorism.

The shooting happened inside a business that manufactures awnings.

The sheriff says the shooter, who has not yet been identified, had been involved in a previous workplace violence incident and had been accused of battering another employee inside the business. He was not charged in that case.

Multiple people are dead after a shooting inside a business in an industrial park on Monday. Authorities converged on the area and announced that the situation has been contained.

Shelley Adams said her sister, Sheila McIntyre, called her from the company’s bathroom during the shooting and was very upset.

Orange County Sheriff Jerry Demings was expected to announce details “as soon as info is accurate,” his office said.

The sheriff’s office reported the situation is “contained,” meaning there is no longer an active shooter. The shooting was reported about 8 a.m. Monday.

Authorities closed the road near the scene and have urged motorists to “use caution.” A media staging area has been set up near the scene.

No further details were immediately available.

Gov. Rick Scott said he had been briefed by law enforcement and that he and his wife, Ann, “are praying for the families who lost loved ones today.”

“I ask all Floridians to pray for the families impacted by this senseless act of violence,” he added.

The Associated Press is a wire service to which WUFT News subscribes.
Previous What A St. Augustine Homeless Shelter’s Management Learned From Hurricane Matthew
Next New Superintendent Brings Changes To Marion County