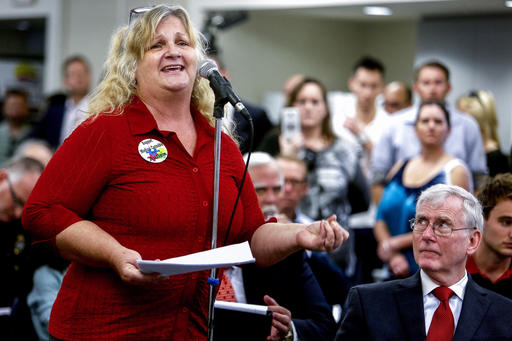 Licensed mental health counselor Cyndi Hamad of Seminole speaks before a standing room only public hearing on medical marijuana provisions at the Florida Department of Health Bureau of Laboratories in Tampa, Fla., Wednesday, Feb. 8, 2017. Hamad explained later that if medical marijuana is restricted and not accessible to all those who need it, people will die needlessly because doctors will continue to prescribe highly addictive narcotics and opiates for many conditions which can be relieved by the medical marijuana. (Cherie Diez/Tampa Bay Times via AP)

Three months after Florida voters overwhelmingly approved a constitutional amendment on medical marijuana, state health officials and prospective pot-seeking patients are at odds over proposed rules that would spell out who could get marijuana.

State officials have recommended restrictions on what type of patients can qualify for medical marijuana, and where they can obtain it. Their suggestions, however, have prompted a wave of opposition across the state, with nearly 1,300 residents attending what are normally low-key bureaucratic hearings to press for less restricted access to marijuana.

“Patients, doctors, caregivers and activists all had a unified message which is rare,” said Ben Pollara, who is the campaign manager for United for Care. “They want impediments removed and a free market place.”

Amendment 2, which was approved by 71 percent of voters last November, was enacted on Jan. 3. It allows higher-strength marijuana to be used for a wider list of medical ailments than what was currently allowed in state law. The rules have become a flashpoint because the amendment requires the state to adopt them by July 3 and have them in place by September.

The state held hearings in several locations and Thursday’s two hours of public testimony in Tallahassee mirrored what happened earlier this week in Jacksonville, Fort Lauderdale, Tampa and Orlando. Most who spoke statewide are also concerned about high prices and limited availability so far of marijuana products. Only five of the seven organizations approved to dispense cannabis are up and running.

Activists want a requirement eliminated that a patient must be under a prescribing physician’s care for at least 90 days. They also believe it should be up to doctors to deem when medical marijuana is necessary and not be confined by the conditions enumerated in the amendment or by the Board of Medicine.

Doug Bench, a former judge who testified in Tallahassee, said that people often delay seeing a doctor until they urgently need treatment.

“When you are ill you, you put it off. You don’t want to hear what the doctor says and by the time you finally go you need it now,” Bench said.

The current law — which was approved by the state legislature in 2014 — allows for non-smoked, low-THC pot for patients with cancer or ailments that cause chronic seizures or severe spasms. It was expanded last March to allow patients with terminal conditions to gain access to higher strength cannabis.

The department will review all comments it has received and agency officials will then publish another proposed rule. How quickly that rule gets published depends on subsequent public comments or any legal challenges.

The Florida Legislature will also get a chance to weigh in. There are two bills in the Senate with the House of Representatives expected to release its version before session opens on March 7.