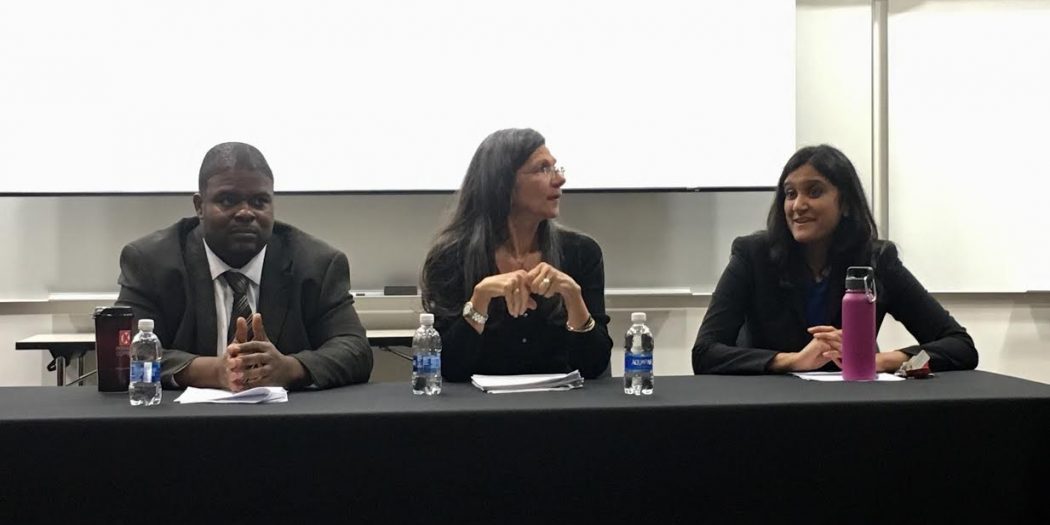 Professors Darren Hutchinson, Berta Esperanza Hernández-Truyol and Shalini Ray sit at the panel discussion on immigration law at UF's Frederic G. Levin College of Law on Wednesday. The three professionals gave their insights on the order and talked about the people who would be affected by it. (Kayla Ziadie/WUFT News)

If President Donald Trump’s immigration executive order happened 15 years ago, Jacob Atem would not be a current University of Florida student pursuing his doctorate.

Having come from Sudan as a refugee, Atem feels very strongly about Friday’s immigration order.

“Fifteen years ago, I was sitting in a refugee camp in Kenya, where I didn’t have any hope and my only hope came when I was being resettled in America,” Atem said. “As of today, waking up with the executive order, I think of millions of refugees across the world that will never touch the U.S. soil.”

The order is aimed at vetting foreigners from “countries of concern” in an effort to “protect the American people from terrorist attacks by foreign nationals admitted to the United States.”

That includes refugees fleeing crises in their countries, terrorism and refugee camps.

“It also suspends the Syrian refugee program,” law professor Berta Esperanza Hernández-Truyol, a human rights expert, said at the panel discussion. “None of the specific states are mentioned in the order, it is all done by reference to the Immigration and Nationality Act (INA).”

Professor Darren Hutchinson, a constitutional law and civil rights professor, said the president’s order discriminates against Muslims, an act not constituted by the First Amendment. The executive order could be invalidated if it is proved to be discriminatory, Hutchinson said at the panel.

“If you look at the political context in which it emerged,” Hutchinson said. “It definitely seems to be targeting Muslims.”

Professor Shalini Ray, a legal skills professor, mentioned that, even though green card holders are legal residents, they were still impacted by the executive order.

Ray said green card holders, in many instances, “have lived here for many decades, have families here, but they do travel.”

“That’s where some of the complaints are being filed,” Ray said. “By those who are of that status, but who left; they tried to come back and they were affected by the ban.”

She mentioned refugees go through a long vetting process.

“They, too, have gone through multiple years of biometrics and investigations into their families and their pasts,” Ray said about refugees. “There’s a lot of analysis of them before they get a visa.”

Atem said there are only a handful of “bad outliers.” Most are just like he was – seeking safety and a better life.

“We, the American people, are very diverse and we embrace diversity,” Atem said. “These are the refugee people that will definitely be good contributors to American society.”

Along with this, Atem emphasized that there shouldn’t be generalizations toward refugees, and the legitimate threats to this country aren’t going to be caught.

“The real criminals who have bad intentions towards our great country of the United States are not going to be captured by this executive order,” Atem said. “It’s going to affect American citizens, American friends, American international students. It’s not going to capture the bad people the government is after.”