A strong cold front is forecast to move through the state and could lead to severe storms capable of producing damaging winds and tornadoes later in the week.

Surface analysis Monday afternoon depicts a strengthening area of low pressure in the Colorado Rockies. This area of low pressure is expected to move into the Great Plains through Monday, with an unstable atmosphere pushing as far north as the Missouri River Valley. Thunderstorms that develop ahead of the accompanying cold front Monday afternoon will develop and could produce hail, damaging winds, and tornadoes from Texas to the Nebraska Panhandle. Storms are expected to maintain strength into Tuesday, where the risk for severe weather slides into the Lower Mississippi River Valley. An approaching upper-level low accompanied by above-average temperatures and abundant moisture will result in the risk of severe weather across the Florida Panhandle late Wednesday into early Thursday, with strong thunderstorms possible across much of the Peninsula through Thursday.

Model guidance is consistent with regards to timing, with both American and European models suggesting the arrival of storms in the Panhandle Wednesday evening. The severe risk gradually shifts from west to east overnight Wednesday, with storms arriving in the Tallahassee area during the early morning hours Thursday. As the line shifts east early Thursday, the severe potential in the Panhandle should gradually begin to diminish. Across the central Peninsula, the severe risk will likely linger into the early evening before storms finally push off the east coast of Florida.

Specific details of severe risk types will come into better view in the days to come, however, initial forecast thinking does depict a mainly damaging wind and tornado threat. This risk will be especially prominent in the Panhandle, where it looks likely the most instability will be present in this area Wednesday afternoon through early Thursday. Depending on how quickly the atmosphere destabilizes Thursday, the risk for damaging winds and an isolated tornado will likely continue across the Peninsula through early Thursday evening. 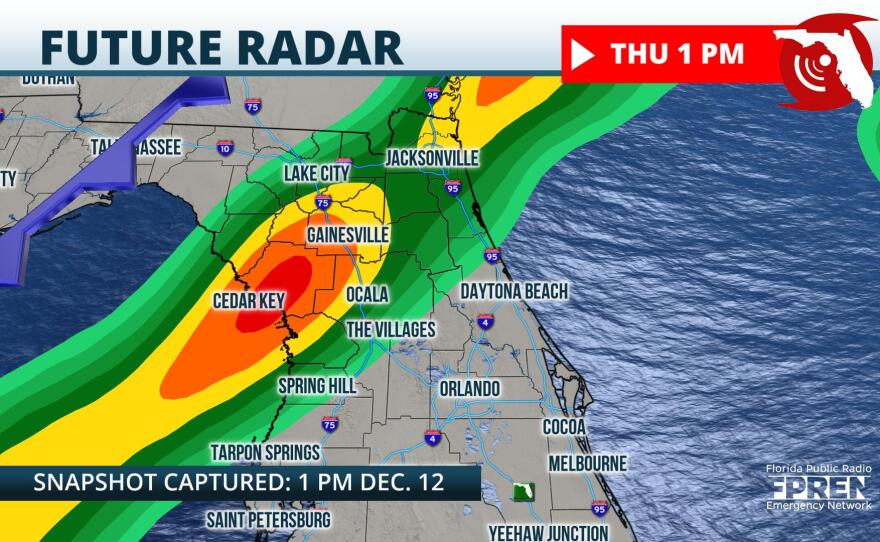 The severe weather season in the Sunshine State typically does persist through the winter months, especially along the Gulf Coast where powerful cold fronts can sometimes spark stronger storms. There is the potential for watches and warnings Wednesday and Thursday. If a watch is issued, it means that the ingredients for severe weather or tornadoes are present in the atmosphere. Watches are typically issued before the weather turns severe and tend to cover a fairly large geographic area for several hours. A warning on the other hand is issued when severe weather is ongoing for a specific location and is typically on a smaller geographic scale, typically covering only a few counties at a time.

Following the severe weather risk Wednesday into Thursday, a significant cooldown is expected from the Panhandle to Central Florida. Highs for the upcoming weekend fall into the 50s across the Panhandle to the lower and middle 70s across South Florida, as sunshine makes a return to the state.