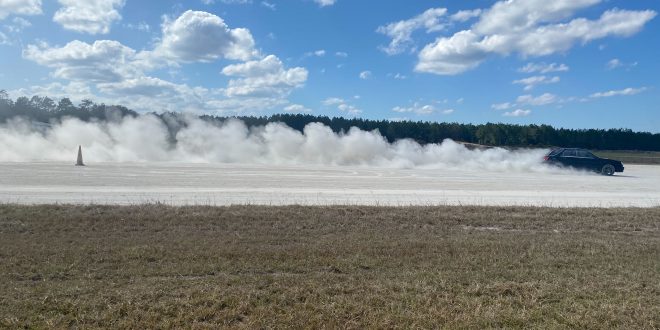 A client at the FIRM practicing his time on the track. (Jonathan Acosta/WUFT News)

And that’s not all they’re up to.

“Think of it like Disney (World) with all the different theme parks. But we save lives by providing high-level technical driving… (and) it’s also a lot of fun,” said Larina Hintze.

Hintze, 51, is the vice president of the motorway park. She started working there in 2017 as a consultant. Back then, it had just three main attractions: the RallyPro driving school, a racetrack and the International Security Academy.

RallyPro is one of the three driving schools in the country that offers authentic European-style rally racing. On a circuit track like Daytona International Speedway, multiple cars race simultaneously. In rally racing, drivers compete to achieve the best lap time without going off course or crashing their cars. The cars themselves are also different; rally cars are street-legal and are customized to handle turns and jumps, while stock cars like the ones used in NASCAR races focus on achieving maximum speed. Rally races are also often off-road.

Customers worldwide fly to the FIRM, which is connected to the Keystone Heights Airport. It is located on an airfield in the middle of a wooded area in Starke.

The motorsports park has two road courses designed for open track days. On those days, you can drive on each racetrack and strive to get the fastest time. One road course is designed for regular cars and the second track uses golf carts.

The motorway has two different rally stages. During these sessions, drivers ride with an instructor as they learn how to rally race. There is also a stage specifically built for 4×4 vehicles where drivers maneuver through an obstacle course.

Different rally packages vary in price from a four-hour teen driving class for $800 to a four-day rally driving package for $5,600.

When customers bring their car to an open track day, they must first register for $275. Then the customer pays $100 for an extra driver to guide them along the track. A customer with limited track experience must also pay $100 for a 20-minute private instruction.

Open track days are almost every weekend year-round. The tracks are available in the rain unless there is lightning.

On Nov. 11 through 13, the motorway hosted it annual Krawl’n for the Fallen event to raise money for families that have lost their loved ones in the line of duty and injured survivors.

Christine Johnson, 47, is the founder of Off-Road United Foundation, a non-profit that helps the families of first responders. Her brother-in-law died in the line of duty in 2003.

“The goal of the event is to come together to honor the fallen and bridge the gap between our first responders and communities,” Johnson said

Michael Glawsoe, 50, is from Polk City, Florida, and has been going to the charity event with his wife since 2017.

He said he had not driven a jeep in more than a year and was eager to return to driving.

“Well, I’m not a fan of the mud,” he said, “but the obstacle courses are fun to see what the jeeps are limited to and what they can handle.”

Other drivers like the social aspects of the motorway.

“The best part about (the motorway) is meeting new people and working on my lap time,” said Lisa Tucker, 50, of Orlando. Tucker started going to track after hearing about it from her co-workers and now goes regularly.

Going to the motorway has also made Tucker a better driver by going on the track with instructors and other drivers with more experience. She said customers could drive around the track for longer than on other Florida raceways like Daytona or Sebring.

In 1998, British rally driver Ivor Wigham set up a European rally school near the Keystone Heights Airport. In 2008, Wigham invested $8 million to build the 1.6-mile road course. He sold his company in 2012, and it was renamed the Florida International Rally and Motorsports Park. It now covers 430 acres and still uses the same 1.6-mile road course.

According to Hintze, many military deaths are attributed to vehicle accidents. With that in mind, the motorway trains special forces units, including Federal Bureau Investigation agents. Clay County’s police department has partnered with FIRM for officer training. The facility also has a military-approved gun armory.

The motorway also is home to a National Aeronautics and Space Administration bus that was used to transport astronauts to the space shuttle. But it also has a driving role as a teaching vehicle.

Beau Beery, 46, of Gainesville, is part of the Porsche Club of America. He has been coming to the motorway for three years. He enjoys his time there with friends and family while he’s trying to beat his lap time.

Jonathan is a reporter for WUFT News who can be reached by calling 352-392-6397 or emailing news@wuft.org.
Previous Flash flooding possible along Interstate 95 as Thanksgiving travel increases
Next Woman whose boyfriend died in crash urges judge never to allow other driver behind wheel 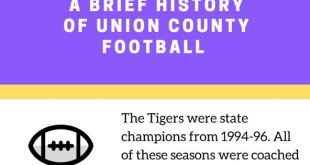