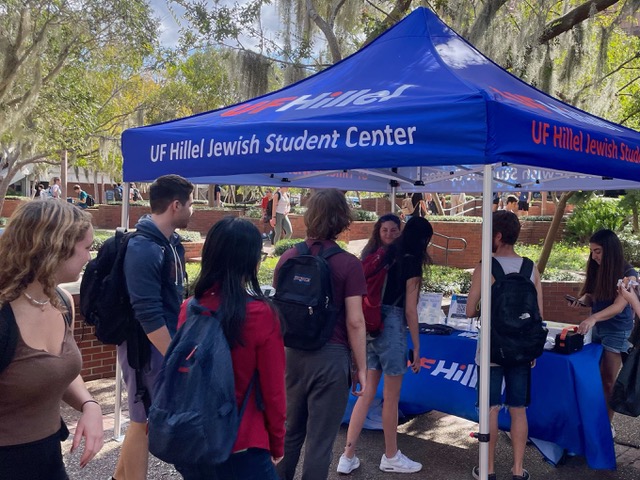 UF Hillel, the foundation for Jewish campus life, hosted a Chomp Hate solidarity tailgate Saturday to unite students against antisemitism prior to the final home game.

Despite the appalling nature of the incident at Florida-Georgia game, 20-year-old UF student Jagger Leach, a second-year business administration major, said this is nothing new. He has experienced antisemitism his entire life.

“As a Jewish student in today’s day and age, we’ve gotten pretty numb to it,” Leach, the vice president of the Jewish Student Union, said.

UF has the largest population of Jewish students of all public universities in the nation. The 6,500 Jewish undergraduate students make up about 19% of UF’s undergraduate population, according to Hillel International.

Jonah Zinn, a rabbi and the executive director of UF Hillel, said he is deeply saddened for Jewish students.

“A football game should be fun, right?” he said. “To see people perpetuate messages of hate and utilize what should otherwise be a friendly competition for those purposes is really upsetting. I’ve had Jewish students describe to me how they’ve never felt unsafe to be Jewish until now, but we want students to know that they belong here at the University Florida.”

The antisemitic message at the Florida-Georgia game read, “Kanye is right about the Jews!!!” It referenced recent Tweets the music artist Ye, formally known as Kanye West, posted in which he insinuated antisemitic beliefs about Jewish people controlling the media.

The Florida-Georgia incident is one of many antisemitic acts that have occurred across the country.

“Antisemitic incidents increase every year,” Leach said. “And they’ve been increasing every year for thousands of years.”

Attending a university with a large Jewish population has allowed him to get involved with the Jewish community, he said. He was one of about five Jewish students at his high school in Jacksonville, and he recalled experiencing antisemitism from a young age.

Jewish UF student Matt Reich, a 19-year-old, second-year biology major, also grew up in a predominately non-Jewish area in New Jersey. Because of Ye’s remarks and the Florida-Georgia incident, he said this is the first time he has been concerned to go to a synagogue and practice his faith.

“When I first heard what he said, I just thought it was another one of his stupid comments,” he said. “I didn’t think it would allow or give initiative to all these other people to come out of the woodworks and be so outwardly antisemitic. It’s something I’ve never seen in my life.”

Reich used to be a fan of Ye’s music but can no longer listen to it, he said.

“I can’t morally justify streaming his music when it’s directly funding his extravagant lifestyle and not holding him accountable for his speech,” he said. “It’s affecting the people that I love and myself.”

UF student Zyrkxis Macatol, a 22-year-old biotechnology major, said he is also choosing to not listen to Ye anymore in support of his Jewish friends.

“We give him a platform,” he said. “We are the people that give him the ability to voice his opinion. When that opinion harms people, causes acts of hatred and adds to the fire, I personally don’t want to be involved in giving him a platform. I just can’t do it.”

He said he is prioritizing checking in on his Jewish peers because he has seen how the hatred is affecting the Jewish community.

Similarly, 21-year-old UF student and Florida Cicerone Hannah Thomas, a fourth-year psychology major, is not only offering support to her Jewish friends but is also empathizing with them.

“I’m Black, and as marginalized people, discrimination, hate crimes and hate speech is not new,” she said. “But it’s always jarring, and it’s always terrifying. I think it’s good that people are talking about it, but now we have the responsibility of what to do now.”

The first step is to educate people on common forms of antisemitism, said 18-year-old Julia Seifer, a Jewish UF student majoring in English on the pre-medical track.

“Learning more about seemingly small actions that Jewish people consider antisemitic and hearing from Jewish people in the community about antisemitism is very important,” she said. “Activism shouldn’t necessarily stop at reposting an Instagram infographic. To truly be an ally, you have to constantly support the Jewish voice.”

She is grateful for how UF handled the Florida-Georgia incident and appreciates how non-Jewish students have responded, she said.

“As a first-year student coming from south Florida with a big Jewish community supporting me, I’m looking to find my community here,” she said. “This incident made me take a step back and be like, ‘Whoa.’ It made me very fearful for how life was going to go, but all the activism and support as a product is so important and meaningful.”

“People have to understand that our activism doesn’t stop at Instagram stories,” she said. “I think that showing up for your friends at a rally – even to just have matzah ball soup – is a really important step in showing solidarity.”

Although UF continues to unite its students against antisemitism, furthering education about the daily hate the Jewish community faces and speaking out in support of Jewish peers is imperative, she said.

“Silence is deafening,” she said.

Julia is a reporter for WUFT News who can be reached by calling 352-392-6397 or emailing news@wuft.org.
Previous UF alum prepares for first NASA 4K stream with Artemis
Next The Point, Nov. 14, 2022: Gainesville four months late on financial reports, risks state funding