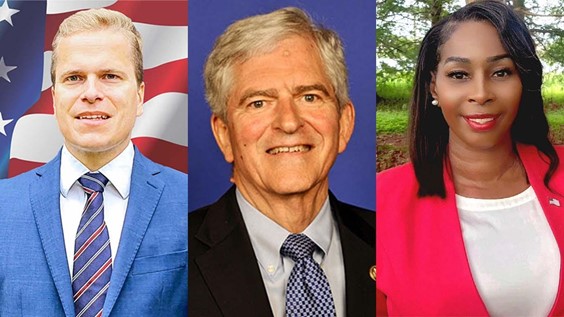 Daniel Webster has represented Central Florida in the House since 2010, but a contested primary and displeased voters might hint at a shrinking support base.

A Democratic and an independent candidate will face the 11th Congressional District incumbent in the Nov. 8 general election. Webster is expected to retain his seat in the heavily Republican district, but some worry the 73-year-old politician might be losing touch with his constituents.

Webster narrowly won the Republican primary with a 50.7% majority against far-right challenger Laura Loomer’s 44.5% of the votes. The unexpected closeness of the race made some voters rethink their support.

“He is old as dust, doesn’t do anything. He is completely out of touch with our needs,” district resident Karen Duggan said. “He needs to retire.”

She voted for Loomer in the primary and said that both she and her husband are dissatisfied with Webster’s voting record and wish he would be more active.

Webster’s team did not respond after multiple requests for comment.

In his last term, Webster introduced four bills, none of which were debated on the House floor.

One of the bills sought to tighten regulations on shark product importations; another proposed prohibiting COVID-19 vaccine mandates and quarantine periods for those traveling within the country. A bill introduced this May hoped to allow a tax deduction for direct primary care physicians who provide charity care. The last bill the representative introduced aimed to facilitate investment and long-term financing of infrastructure projects that provide a public benefit.

“I am committed to continuing to work to reduce government spending, secure our border, and protect our constitutional rights while opposing the Left’s radical agenda,” Webster wrote in a statement following his primary win.

During his last term, he voted against the Build Back Better Act budget resolution, the Women’s Health Protection Act of 2021, which proposed prohibiting governmental restrictions on abortion access, and the Equality Act, which proposed amending the Civil Rights Act of 1964 to prohibit discrimination based on sex, sexual orientation and gender.

Many remain content with his work and enjoy having him as a leader in the community.

Tina Passarelli, 55, describes him as a “good guy” who likes people. She has met him multiple times before through the First Baptist Church of Winter Garden and said she appreciates having someone listening to her.

“When he says he’s gonna do something, he does it, and he does it no matter what,” she said. “He listens to me and what I have to say.”

Living with a disability, she told him about the lack of psychiatry and psychology programs offered to her community. He asked her where she was staying and told her he would look into the issue.

Wendy Sousa, 60, who has also met him, wrote in a message that she knows him to be a fair, honest man of high moral value.

Joseph Hart, a 44-year-old retired soldier, thinks Webster is not doing enough for the community unless it is for the businesses or business owners. The influx of developers and rising living costs in the area concern Hart.

Growing up in Sumter County, Hart has seen the expansion of The Villages into what used to be agricultural areas. Hart thinks local politicians give the community living in that area of the county better treatment than others in terms of infrastructure and representation.

2020 census data showed that, with a 39% percent change in population since 2010, The Villages was the fastest-growing metro area in the country.

Democratic candidate and business owner Shante Munns, 42, decided to run against Webster when she saw issues left unresolved at a federal level. She thinks the representative has lost touch with the community.

“When you’re out of touch with your district, that means the foundation starts to crumble, and your leadership becomes shaken,” Munns said. “And when that happens, that leads you now to go back and to rebuild those strained relationships, whether it’s due to oversight or negligence.”

The main issues for her campaign are economic development, environmental protection and affordable healthcare. She thinks large corporations have disproportionately moved into the area and would like to implement incentive programs to help small businesses.

She also focuses on providing clean water to the district, which she said has been seeing poor water quality due to blue-green algae overtaking lakes and rivers.

“It’s just an uphill journey,” Munns said. “But we need to have, and we deserve fresh, clean water. It is an essential part of living, and I plan on fighting for that purpose.”

Independent candidate and Denmark-based business owner Kevin Porter, 39, will also be on the ballot. The expat, who has lived outside of the U.S. for about 16 years and runs the campaign digitally, believes in an “America-first” approach to policy. He plans to move to the district if elected.

Porter said he has been de-platformed and censured by Facebook and Twitter. He wrote a 32-page e-book outlining where he thinks the country went wrong and how to “revive” it. Most of his stances focus on returning to the country’s founding ideals and “returning to the roots.”

The two challengers will face Webster in the upcoming elections on Nov. 8.

On April 22, Governor DeSantis signed new congressional district boundaries into law. With the redistricting change, Belleview, Inverness, Homosassa Spring, Brooksville and some parts of the Villages no longer fall into District 11.

Kristine is a reporter for WUFT News who can be reached by calling 352-392-6397 or emailing news@wuft.org.
Previous Here’s what Floridians can expect on election night
Next Levy County school shut down after drug scare