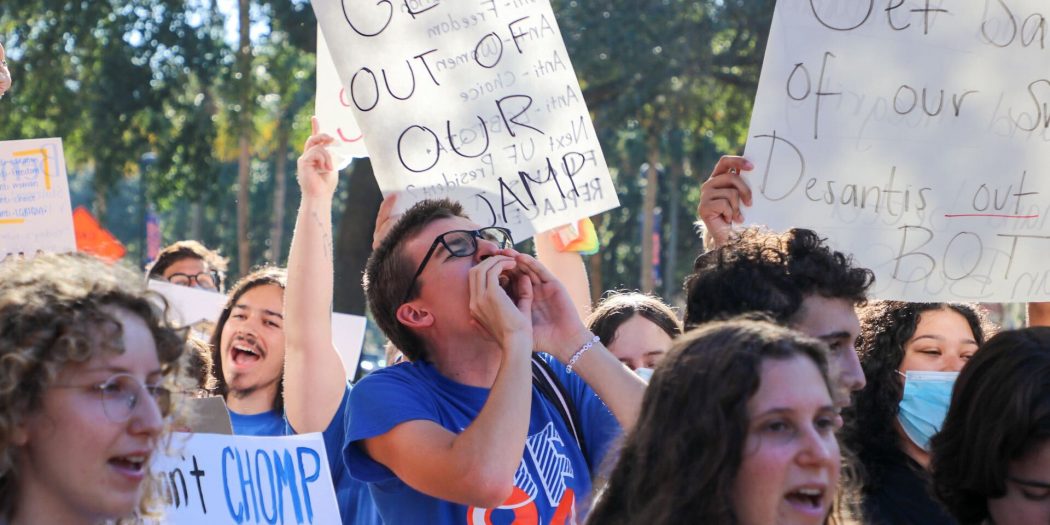 About 60 protesters on Tuesday rallied around the heavily secured Emerson Alumni Hall along University Avenue in Gainesville.

They chanted, “Anti-women, anti-gay, Ben Sasse go away!” and “Hey, hey! Ho ho! Ben Sasse has got to go!” while wielding sings and paper masks featuring the face of the man who is the University of Florida’s likely next president.

The protesters assembled to voice their disapproval of the UF Board of Trustees’ final interview with its only candidate for president, U.S. Sen. Ben Sasse, R-Nebraska.

Tuesday’s underwhelming demonstrations were in stark contrast to the upheaval that accompanied Sasse’s first visit Oct. 10, when protestors flooded the building and forced the forum to be cut short. But the low turnout was not due to a change in sentiment among faculty and students.

UF officials prepared Emerson Alumni Hall by erecting barricades around the entire building and public square. The doors were also equipped with metal detectors and signs posted that read, “protest not permitted indoors.”

Last time, there was a light police presence of under 12 officers. Tuesday, there were dozens of campus police stationed around and inside the building. Following Sasse’s first address to students on Oct. 10, he was escorted off campus by a University Police Department squad car. Protestors then occupied the ballroom where Sasse spoke.

“We were expecting police, but not this,” said Aron Ali-McClory, protest co-organizer and chair of Young Democratic Socialists of America. “UF is being Draconian because they hate opinions that don’t align with theirs.”

UF faculty and staff also attended the protest on Tuesday to display their discontent with Sasse and the presidential selection process. Paul Ortiz, professor of history and avid Sasse critic, addressed protesters, stating Sasse’s credentials did not suffice for UF’s stature.

With limited seating reserved mostly for faculty, only around five protesters were permitted in the building to listen in on the interview.

After hours of public comment and questioning by the Board of Trustees, the panel voted unanimously to appoint Sasse as UF’s 13th president. At the moment of the vote, the livestream audio abruptly ended as around five members from the audience shouted in disapproval.

“They don’t understand what this will do,” said student protester Rosie Jordan. “This will affect UF’s reputation. I just wish I could leave UF a better place for my siblings.”

Though the protestors’ plastic bugles could be heard faintly inside, the demonstration was largely restricted to the north side of University Avenue. Protest organizers said the university’s crackdown is what kept many at home.

It followed a university-wide email last week from UF President Kent Fuchs warning protesters not to enter Emerson Alumni Hall, citing a two-decades-old policy that prohibits indoor demonstrations. Students may receive punishment under the Student Conduct Code and may even be subject to arrest if they violate the policy.

“The aim is not to get arrested – it’s to be heard,” Ali-McClory said.

The email stated the policy hasn’t been enforced in recent years because of the infrequency of indoor protests. Fuchs’ reasoning behind resurrecting the policy is to prevent protestors from hindering Sasse’s freedom of speech by disrupting the Nov. 1 interview.

“UF only cares about free speech when it suits them,” said Lily Kalandjian, protest co-organizer and public relations director for UF College Democrats. “There was no damage, and no one got hurt.”

Student activists are not alone in their frustration with Sasse’s nomination.

On Oct. 27, the UF Faculty Senate approved a no-confidence resolution that denounced the presidential selection process. In a vote of 72-16, senators refuted Sasse’s selection as UF’s sole presidential candidate and demanded more transparency.

“I think the process is the biggest problem here because we don’t know who those other candidates were,” said Breann Garbas, the resolution’s sponsor and assistant professor at the UF College of Medicine. “We don’t know anything about them, and we had no input in the decision.”

Senators asked the Faculty Senate chair and Board of Trustees member, Amanda Phalin, if the outcome would impact her vote on Nov. 1.

“I have to vote in what I believe to be the best interest of this institution,” Phalin said.

Before the Faculty Senate’s vote, the UF student senate passed its own resolution condemning Student Body President Lauren Lemasters’ vote for Sasse in the Presidential Search Committee, of which she is a part.

Ava Kaplan, co-organizer and political science major, knew it was unlikely that they could keep Sasse from being voted in as UF’s next president — but that didn’t stop her from protesting the decision, she said.

“My hope would be that there was at least some descent,” Kaplan said. “Even with him as president, we’ll still be here.”

Jack is a reporter for WUFT News who can be reached by calling 352-392-6397 or emailing news@wuft.org.
Previous UF selects Sasse as its next president; conservative U.S. senator pledges ‘political celibacy’
Next Football hooligans told him holocaust never happened; his relatives died in Nazi death camps