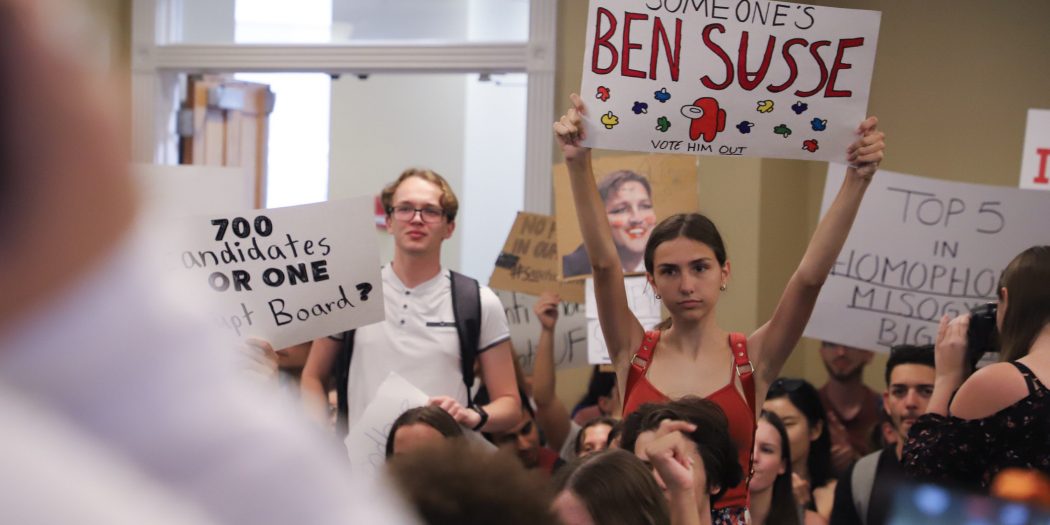 Students stand on chairs while holding up signs to yell in protest in the Emerson Hall ballroom. (Photo: Serra Sowers/WUFT)

About 300 protesters took over a campus auditorium where U.S. Sen. Ben Sasse was being introduced to students and faculty Monday as the presumptive University of Florida president.

Floors shook inside Emerson Hall as protesters entered the building at 2:53 p.m., stomping and banging on walls, chanting “Hey, hey! Ho, ho! Ben Sasse has got to go.”

UF had originally planned to host Sasse (R-Nebraska) in three open forums for the faculty senate, students and employees starting at 1 p.m. until the disruptions began.

Many students attending the protest said they were angry that UF would hire a candidate with a voting record they said doesn’t reflect their points of view.

“I just think that his voting history, anti-affordable care act, anti-LGBTQ, climate denial in the state of Florida is kind of ridiculous,” Jade Jackson, 20, a public health major, told WUFT News as the protest began outside. “He doesn’t support the values of students or even just students in general at UF.”

Sasse continued to answer questions provided by UF Student Body President Lauren LeMasters, but found himself overpowered by the protesters’ thundering disapproval in the middle of the student forum.

“They have good rhythm,” Sasse joked about those chanting on the other side of the door.

As protesters climbed the stairs, their cries only got louder, prematurely forcing Sasse and LeMasters out of the ballroom. The open forum for students began at 2:30 p.m., but ended about 15 minutes early.

Student spectators inside joined protesters in the hallway. They continued their protests for 21 minutes before taking over the ballroom at 3:14 p.m.

UF administration, spokespeople and police moved to the north wall of the ballroom, where Sasse and LeMasters had exited as protesters took over the hall.

Upon filling the room and taking the stage, protest leaders said their goal was to pressure Sasse into not accepting the position.

Organizers supplied a list of demands, including for the Florida State Legislature to repeal SB520 and for the UF board of trustees to release the names of all 12 presidential search finalists. Sasse was the sole finalist announced Thursday.

Sasse resumed his presentation via remote livestream, but protesters paid no mind as he and Rahul Patel, a trustee and chair of the presidential search committee spoke. Instead, protesters took turns expressing their frustration.

Sasse met with UF Faculty Senate and other faculty members at 1:15 p.m., with roughly 100 people in attendance for his first of three planned forums.

The session went as planned, with Amanda Phalin, the chair of the faculty senate and a trustee, asking Sasse questions on stage and taking three questions from the audience.

Between the prepared questions and the brief period for community input, the topic of academic freedom resurfaced throughout the faculty Senate meeting.

Phalin read anonymously submitted questions about what actions Sasse would take to preserve academic freedom in light of the passage of HB7, commonly known as the “Stop Woke Act.” He said he did not know much about it.

“I wasn’t satisfied with his response to the question around HB7,” said Dr. Pasha Agoes, assistant instructional professor at the William and Grace Dial Center at UF.

Agoes tried to ask Sasse to elaborate, but he was unsuccessful because there was only time for three questions from the audience before the forum ended.

“He didn’t specify how he was going to balance academic freedom under the law,” Agoes said. “Maybe because he is new and doesn’t know his plan yet.”

Phalin asked Sasse about his take on the trustees having too much influence on the day-to-day decisions of the university. The senator said that a “noses in, fingers out” stance is a board doing its job well, meaning that it should not be overbearing.

Ally Rodriguez, 25, a senior family youth and community sciences major, said she loved being a Gator but hated the committee’s potential pick.

“This is not a representation of what UF believes in,” Rodriguez said in front of the crowd. “Because we are UF. They are not UF.”

Protesters moved to the back of the building around 4:15 p.m. to try to catch Sasse leaving. Around 4:20 p.m., Sasse left from a side door escorted by uniformed UF police officers and was spirited away in a police vehicle.

Serra is a reporter for WUFT News who can be reached by calling 352-392-6397 or emailing news@wuft.org.
Previous Protesters disrupt first visit to UF for school’s presumptive new president
Next Decolonizing the Curriculum, Episode 2: The Seminoles and land grant universities