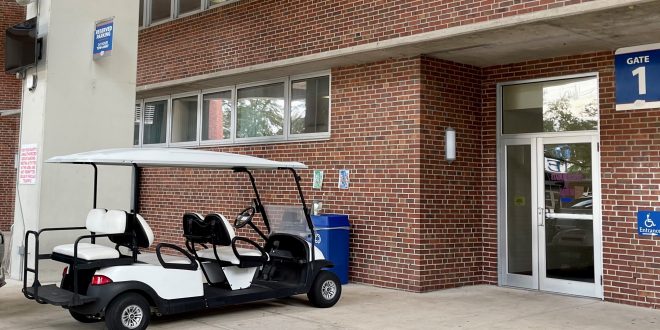 A six-passenger golf cart is seen Oct. 17, 2022, parked under the University of Florida's football stadium. Gainesville police say someone stole a golf cart like this one from the University of Florida Gators’ new $85 million football practice facility. Police found it a day later under a tarp in the yard of a man who has been the subject of complaints for over a decade about vehicles, junk and debris on his property just north of campus. (Ted Bridis/WUFT News)

Someone intercepted a six-passenger golf cart from the University of Florida Gators’ new $85 million football practice facility. Police found it a day later under a tarp in the yard of a man who has been the subject of complaints for over a decade about vehicles, junk, trash and debris on his property.

In court records filed last week, police said Douglas Frederick Englert, 61, of Gainesville was captured on a surveillance camera taking the stolen golf cart on a trailer. Police said they found it at his home about four miles north of the university’s campus, where it was found under tarps at the back edge of Englert’s property.

Englert – the subject of a sworn felony complaint on a charge of grand theft of at least $10,000 – did not immediately respond to a phone message left over the weekend with a family member at his home. He has not been arrested in the case.

Police said on the night the Gators lost 26-16 to Kentucky, on Sept. 10, a man they did not identify wearing a Gators blue T-shirt, jeans and white sneakers drove the golf cart near midnight from Florida’s new football practice facility to the Gainesville Woman’s Club about a mile away. He abandoned the cart by a tree, police said.

Police said the next morning, Englert drove his van with a trailer to the woman’s club, loaded the stolen golf cart on the trailer and drove home. The cart had a large laminated Florida Gators sign on the windshield that was missing after police said they found it under the tarp at Englert’s home.

Police did not say whether they suspect Englert was the unidentified Gators fan who initially drove the cart out of the football complex. They also did not explain how they tracked the cart back to Englert’s home. It was unclear whether surveillance cameras had captured Englert’s license plate, the cart had a GPS tracker installed or a tipster pointed a finger at Englert.

The Englerts have been the focus of complaints by neighbors and city inspectors for many years. The most recent enforcement action came last year, when the city said Englert had failed to keep his home in a “clean, safe and sanitary condition,” but county criminal prosecutors dropped the case because a judge said Englert hadn’t been properly served with court papers.

A photo of the home from two years ago in the county property appraiser’s files showed a small, ranch-style home with at least 10 trash cans in the front yard, discarded tires, a covered trailer and two large objects covered in blue tarps.

Police listed two similar home addresses for Englert on the sworn complaint filed about the golf cart in Alachua County Circuit Court and said they recovered the cart at an address that does not exist but would be about one mile from the home where Englert and his family lives.

Nora is a reporter for WUFT News who can be reached by calling 352-392-6397 or emailing news@wuft.org.
Previous The Point, Oct. 17, 2022: Results from a new survey of Florida colleges and universities did not go as expected
Next Tracing the source of Gainesville’s gun violence problem: Legal or illegal ownership?