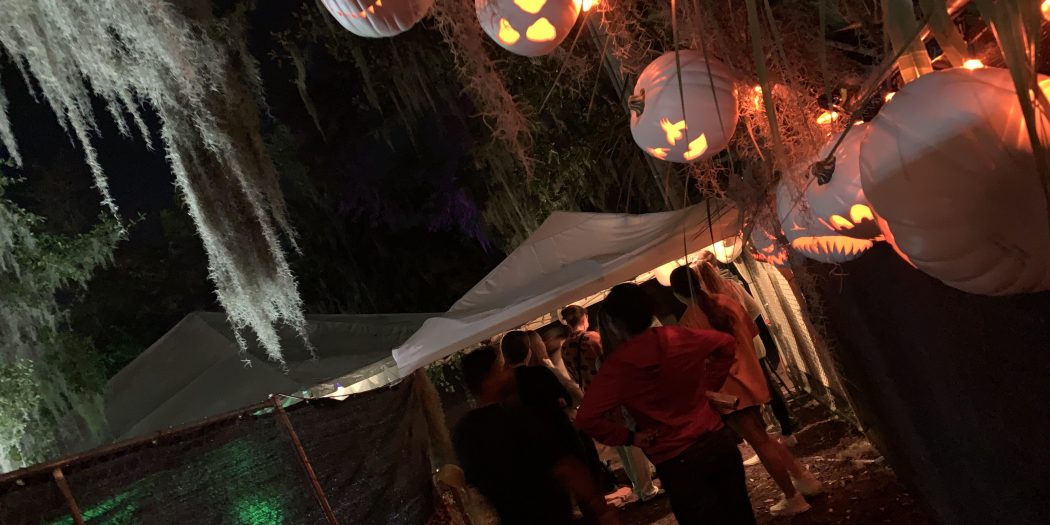 On a fateful September evening in 2005, Lawton Swan and Katherine Swan attended Universal Studios’s Halloween Horror Nights — and with high hopes. It was one of their first dates.

Lawton also grew up a horror fanatic, infatuated with haunted houses, scary movies and existentialism. He knew it was going to be a fun time.

What he didn’t know is that the fear they experienced that night would bind them together, blossoming into a special intimacy.

Lawton remembered one construction-themed horror house, in particular, where they had to wear a hardhat and light that randomly cut out, leaving him and Katherine in pitch-black darkness.

“It was honestly very scary,” Lawton said. “And it was really cool to do that with her in that we got to feel acutely vulnerable and comfort each other in that vulnerable state, which is very powerful, I think, as a bonding mechanism.”

He and Katherine have been married for 12 years now and have an eight-year-old son. And that experience had a profound impact on him. So as a psychologist who earned degrees and taught at UF, Lawton was inspired to combine his expertise with his love for horror to finally actualize a childhood dream: a haunted house of his own, which debuted Thursday in the form of the Gainesville Fear Garden.

With a maximum of 200 participants allowed per night, the grand opening sold out and lasted from 7 p.m. to midnight.

An outdoor event under the light of a near-full moon, it featured a cluster of canopies comprising various drinks, refreshments, games and a play area for children. Two food trucks were parked outside as well.

The atmosphere was that of a graveyard at witching hour: There was a fog machine scented with Disney World’s secret haunted house fragrance — imagine how the outdoors smell just before it rains — coupled with moody lights and classic ‘80s music like Michael Jackson’s “Thriller.” Tables were set up for guests to sit and chat, each adorned with a Quiji board.

But to gain entry to this Halloween extravaganza, everyone had to endure the Dark Story Tent, the centerpiece of the event.

The experience largely relies on sensory deprivation. After signing a waiver and entering the tent, participants are given a pair of headphones and goggles allowing for only the ground to be visible. These may be removed at any time if people become overwhelmed, Lawton said.

Groups of up to 10 people then take a simulated elevator ride into Kojo Biotech, a make-believe biotech facility that studies plants. But it soon becomes clear that something sinister lies ahead.

Over the course of roughly 30 minutes, participants move through the facility as voices in the headphones provide instructions.

To Lawton, it was important that he created a story-driven experience. He said many haunted houses neglect story and, consequently, fail to fully engage people. That’s why he collaborated with Billy Palmer, a former student of Lawton’s who has won scholarships for writing fiction.

Lawton himself plays the part of a Kojo Biotech researcher who sets the stage for participants; but behind the disguise is a UF psychologist trying to understand the relationship between simulated trauma and emotional intimacy.

Lawton said he wants the fear garden to be entertaining. But he’s also using it as an opportunity to explore, in a controlled environment, what brought him and his wife closer together at Halloween Horror Nights.

Participants will be given a post-survey that asks them to reflect on their experience, specifically their interpersonal experience. Lawton said it asks them to pick the person they were closest to prior to coming and then answer questions about their relationship and how the experience affected that bond.

Lawton lauded his twenty-six research assistants from UF who helped make the event happen. The research from the fear garden could be published and would help them advance to higher education.

“We will have probably 2000 people at the end of the season, ideally for data analysis, which is more than enough to run some good statistical, well-powered tests,” Lawton said.

Lawton and Katherine said there will be growing pains as they fine-tune different aspects, as attendees gave mixed responses about the experience.

Kris Villota, 23, said, “I love the concept of a sensory deprivation haunted house. And if this became something that was more popular amongst the world or something that would be something I’d be more interested in than like going to Halloween Horror Nights.”

Ray Carthy was hoping for something more but appreciated how local it was.

“It is very nice to have something like this in Gainesville,” he said. “It wasn’t as immersive as I thought it would be, but it’s a fun experience. And I’d recommend it to somebody who’s never done it.”

Others, like Jack Maguschak, 27, and Paul Zerubinski, 26, liked the concept but weren’t scared at all.

“The people that are like, ‘That wasn’t scary.’ I’m like, ‘I know. I’m not sure that was the point,’” Lawton said. “It was supposed to be kind of scary. But it was also supposed to be immersive and like fantasy.”

More than anything, Lawton enjoyed watching couples go through the Dark Story Tent as they seemed to get the most out of it. And Katherine said, to her, it wasn’t as important whether people thought it was good or bad.

“I think that it’s more important that something happens that they can talk about together,” Katherine said. “We’d like it to be good because I’m going to have a really hard time reading bad reviews on the internet. But I think that it’ll be good at some point. Right now, Katie says, ‘It’s okay if they didn’t love it tonight because it’s going to get better.”

The Gainesville Fear Garden concludes on the night of Halloween. If it is ultimately successful, Lawton and Katherine said they hope to do it again next year. They may even host a singles night.