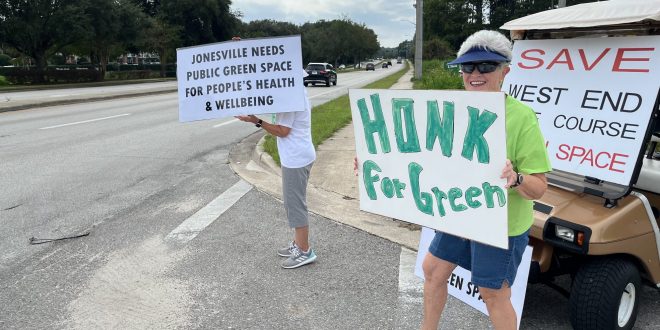 Stephanie Phillips, 82, West End Community Alliance for Recreation and Education treasurer, shows off her “honk for green” sign to oncoming traffic. “I like this sign because I get a response,” Phillips said. (Emma Behrmann/WUFT News)

Update, Monday, Sept. 26: Due to Hurricane Ian, the Alachua County Commission meeting has been postponed from Tuesday until a date to be determined in the future.

A proposed land-use change for the 75 acres at 12830 W. Newberry Road angered and mobilized residents like Hornby, who has lived in Newberry for 33 years. He serves as the president of West End Community Alliance for Recreation and Education, a nonprofit organization with a mission to keep West End recreational.

“It was a true community space,” Hornby said. “That’s what made it so special.”

The residents want to protect that community space from development and revive the recreational hub the property once was.

A crowd of 20 lined the sidewalk in front of West End Golf Club Friday from 4 to 6 p.m. Residents grasped handmade signs that read “stay the course” and “honk for green.” Their efforts intended to persuade the Alachua County Commission to reject a change in West End’s land use to residential in its vote Tuesday.

Stephanie Phillips, 82, treasurer of WECARE, raised her “honk for green” sign and chuckled when cars sped by and beeped. She’s posted about the organization’s efforts in Facebook groups like Gainesville word of mouth and on Nextdoor, an app for neighborhoods, for three years, she said.

After 50 years, the golf course behind her closed in December 2019. Sayed Moukhtara, CEO of Gaines-Invest, plans to purchase and develop residential and commercial areas on the property. But the sale to developer JBrown Professional Group, the engineering group Moukhtara hired, is contingent on the property’s change to a residential land use.

The group submitted a zoning application to Alachua County in March and requested West End’s land use change from recreational to low-density residential, where about 70 homes would be built. In April, the Alachua County Planning Commission voted unanimously to deny this land-use change. But West End’s future depends on the five county commissioners and their vote Tuesday.

West End was built in 1969 with a vision to develop a community around a recreational centerpiece, Hornby said. The developments that perimeter the golf course sport golf-related names like The Greens and Fairway Pointe.

The course engaged the community and was home to the Gator Junior Golf Association, a nonprofit group that teaches golf to students. Since the course’s closure, the students play at both Turkey Creek and Ironwood Golf Course.

Bob Geambazi, 67, is a PGA Class A professional and one of the lead instructors for Gator Junior Golf. He said he wants to see West End as a golf course again.

“With only three golf courses in the city, we desperately need a golf course,” Geambazi said. “West End was super important for the community, for Gator Golf.”

Residents’ visions of how the West End property could serve the community vary, but they agree it needs green space rather than development. Behind the unmaintained course, four residential subdivisions are under construction: Tara Esmeralda, Tara Greens, Arbor Greens and South Pointe. These will add more than 200 homes to the area.  JBrown Professional Group’s development plan for West End, a subdivision named Tara Club, would add another 75 to 100 homes.

Laura Dearinger, 72, has lived in West End for 19 years. She said she’s focused on the next generation of Newberry residents.

“We need to think about the children of tomorrow,” Dearinger said. “They need more than concrete.”

Students like Buchholz High School junior Matthew Meyer, 16, are part of this next generation. He attended the demonstration Friday to draw attention to the issue of development. He said 75 to 100 homes would cause unnecessary congestion on Newberry Road and stress to stores like Publix.

“Money talks,” Meyer said of development. “But it will destroy a lot.”

West End faces this land-use change because of its pending sale to a developer. If the owner, Peter Min, who did not respond to WUFT after several attempts to contact him, sold the land as recreational, there would be no need for rezoning, according to the Alachua County code of ordinances.

If the property remains recreational, West End Golf Club is not readily a community centerpiece; it is unmaintained and overgrown. Weeds rise a foot from the ground, and dead palm fronds dangle from the trees above. In March, the owner was fined for two fallen pine trees on the property, which the county deemed hazardous.

Mark Dixon, 58, former general manager at West End Golf Club, said deteriorating conditions of the course drove away customers and led to its closure. Now, upkeep is ignored, and no ordinances are in place to make the owner maintain the property at a certain level. If West End remains recreational following Tuesday’s vote, he suggests the community request a county ordinance to enforce property maintenance from the owner.

Dixon echoed the sentiments of those who attended the protest. He said the property should remain recreational.

“The property, it’s an asset to the county, to the community,” Dixon said. “You can’t just continue to put houses [in] every available space.”

If the demonstration’s message is received by the county commissioners, West End will not see homes on its property. But what it will see is still discussed within the community.

Some residents like Geambazi want to see golf’s return. Residents like Dearinger envision a youth educational center and a garden to promote butterfly and bee populations. Hornby said the community is diverse, and West End could bring an array of recreational activities from biking to swimming to pickleball.

Whether West End will serve as a place to enjoy the outdoors or look more like the Tioga Town Center across the street, depends on Tuesday’s vote.

“We get development needs to happen,” Hornby said. “But to make it a great place to live, you need some amenities and places for people to get out and have some fun.”

Emma is a reporter for WUFT News who can be reached by calling 352-392-6397 or emailing news@wuft.org.
Previous Battle of the bands raises over $25,000 to help end homelessness in Gainesville
Next Tropical Storm Ian threatens Florida, but uncertainty persists 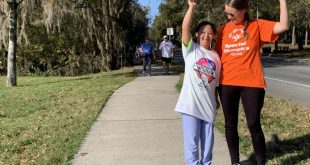