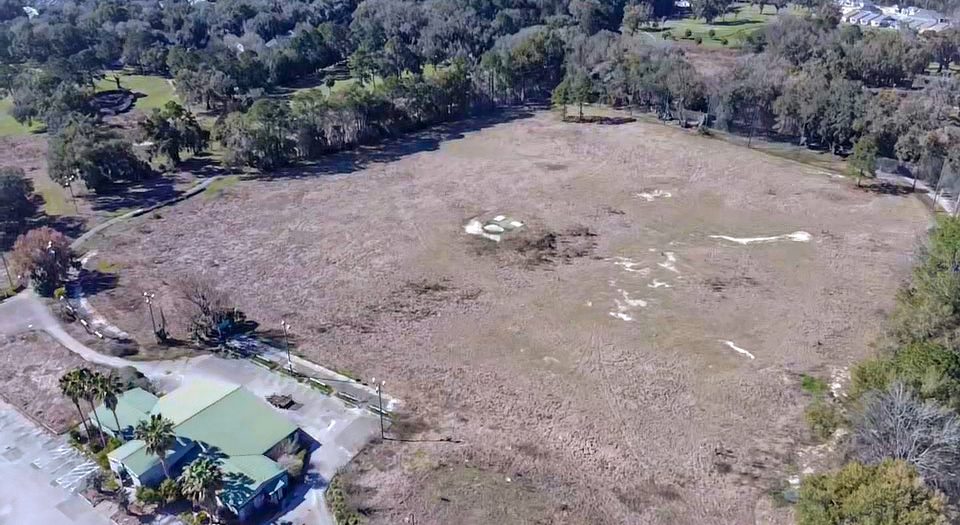 Over a year after the West End Golf Course closed, people in Newberry and Gainesville are still trying to shape the property’s future.

The 75 acres at 12830 W. Newberry Road are currently under contract to be sold. The potential future owner of the land, Sayed Moukhtara, has a plan to develop residential and commercial spaces to replace the golf course.

With a listed price of $6.25 million, the sale is contingent on the developer securing a land use and zoning change with Alachua County — changing the designation from recreational to low-density residential. Developer JBrown Professional Group submitted an application in August 2020, which will be reviewed for consistency with the county’s comprehensive land use plan and land development code.

Some residents living near the now-overgrown course in the Greens at West End and Villages of West End, however, wish to see the former fairways in their backyard stay a green space.

“A lot of people purchased their properties there to live on or be part of the golf course community,” Newberry resident Paul Hornby said. “To see that potentially come to an end is really disheartening.”

Hornby is a member of a group called the Friends of West End (FOWE). The group describes itself as a coalition of concerned citizens hoping to stop the potential owner’s development application from moving through the county.

“I don’t think anybody’s really heavily opposed to development,” Hornby said. “That needs to happen. The area’s growing. But we just don’t see that particular 75 acres as a priority to be developed.”

Instead, Hornby said the group has plenty of alternative ideas for the property, such as a public park, a community pavilion, walking trails, a new driving range, a reduced nine-hole course or even a youth education and event center.

Hornby listed some of the group’s concerns with the potential project, including more traffic congestion, overdevelopment and the absence of nearby recreational space. He added that within a two-mile radius of West End, there are already over 1,600 residential units, and 120,000 square feet of commercial development currently under construction or being proposed.

So far, Friends of West End has gathered over 1,200 petition signatures through Change.org against the land use change, and raised about $20,000 through GoFundMe.

State Sen. Keith Perry attended one of its meetings on Feb. 11. Members gave him a brief presentation on their goals and accomplishments.

With over 40 years of memories at West End Golf Course, Perry shared his advocacy for the group. He added, however, that there isn’t too much he can do at the state level, as the issue currently resides with Alachua County government.

Perry did say he would look into potential grants and funding to support the government acquisition of the land, including funds from Wild Spaces and Public Places—a half-cent county sales tax program passed in 2016 with the purpose of acquiring and improving conservation lands, parks and recreational facilities.

“I mean, you’re talking about wild places, public spaces, you can’t have a more public space than this,” said Perry. “That’s right in the heart of one of the biggest growing areas in Alachua County.”

For the moment, according to Gerald Brewington, the senior planner of the Alachua County Department of Growth Management, the potential owner of West End isn’t very far in the process of getting the land use changed.

Brewington said one of the early steps in the land use change process, required by the county land development code, is to hold a public neighborhood workshop so the developers can give a “heads up” to nearby residents and landowners.

JBrown Professional Group and Moukhtara held their virtual neighborhood workshop in July 2020. Hornby said the Zoom call maxed out at 100 people, with many more participants waiting to join.

Hornby said the original plan presented would have permitted over 400 residential spaces, along with an 80-room hotel. He added that he only saw negative reactions to the presentation.

Moukhtara said about the potential development, “I understand change can be difficult. It will be important to have a continued, open dialog with neighbors throughout this process, which is exactly what we plan to do. But, I also believe it is important to recognize that likelihood of this property ever reopening as a golf course is slim to non-existent. So, if this property is going to be redeveloped, my goal is to create a profitable project that is also an asset to our community, that we can all be proud of. This is going to be the case whether I develop this property or someone else does in the future.”

Moukhtara added that they are still in the visioning process for the development. Based on input from the first neighborhood workshop, they decided to remove the hotel.

In August, JBrown Professional Group submitted the application for the land use and rezoning change.

They met with the Alachua County Growth Management Department staff, where Brewington said they gave their initial overview and impression of the plan. He said the department uses this time to highlight any potential issues or discrepancies regarding the comprehensive plan that may come up during development.

On Oct. 18, JBrown Professional Group requested a deferral of the application, essentially putting it on hold. Brewington said they have a full year from the initial application submission to complete the next step, having a public hearing with the county planning commission.

“We’re on hold right now,” Brewington said, “and until we get the go ahead from the applicant to proceed… if they wish to proceed, the board won’t be hearing it. And so, really, it’s their timeframe, not ours.”

The application is still in deferral status. Brewington said the developers have plenty of time to set up a public hearing before their deadline in August.

For the Friends of West End, Hornby said the only thing they can do is wait for the application to move in front of the planning commission, and eventually the five county commissioners.

Dylan is a reporter for WUFT News who can be reached by calling 352-392-6397 or emailing news@wuft.org.
Previous Gainesville Seeks To Reduce Low-Level Arrests By Improving Its Diversion And Deflection Program
Next Florida Will Soon Lower COVID Vaccine Age Eligibility To 55