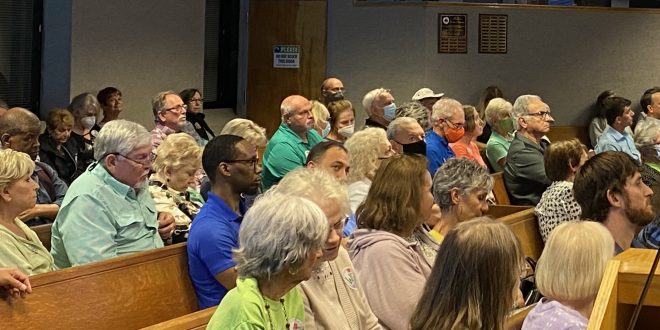 Attendees of Thursday's planning commission hearing listen to a developer's proposal for West End Golf Course while some wait to give public comment. (Nicole Geary/WUFT News)

The weeds at the former West End Golf Club property will continue to grow after its would-be developer hit a roadblock this week.

The Alachua County Planning Commission on Wednesday voted unanimously to deny a land-use change for the golf course on Newberry Road.

The developer, JBrown Professional Group (JBPro), brought the proposal to the county, asking to change the land designation of the 75-acre site from recreational to low-density residential with up to 70 homes. People living in surrounding neighborhoods have for much of the past two years opposed the plan, and many of them attended Wednesday’s hearing.

Around 100 people came to the meeting. Several wore neon green t-shirts that said “Friends Of West End,” and more still were dressed in shades of green.

The West End Community Alliance for Recreation and Education (WECARE) is a nonprofit organization formed by those living around the golf course. WECARE hired professional land planner Thomas Hawkins and attorney Jeff Braswell to represent them, and both spoke at the meeting.

A.J. “Jay” Brown presented JBPro’s proposal for the land amid murmurs from the audience. He said he has held several meetings with surrounding neighbors to hear their concerns. The developers changed the plans in response to the feedback, but the neighbors continued to push back. Brown said the plan called for using only some of the land for homes and keeping the rest as green space that could be used by both the homeowners of the proposed neighborhood, as well as people in the surrounding areas. He suggested that that land could be donated to the county to be turned into a public park so that no further development would happen on that land.

“I have been doing this for 30 years, and I can tell you that I stand here before you and say that this is as responsible a design I have ever been involved with in my entire career,” Brown said.

JBPro’s original proposal for the land included 487 units and a hotel.

The West End Golf Club opened in 1969 and closed in 2019. Over its years of operation, it hosted many tournaments and youth golf programs, including the Gator Junior Golf Association. It had a lighted driving range that both Brown and other speakers at the meeting recalled using. Since then, the site has become overgrown, and tall weeds surround the entrance. However, many who live near the site still use the green space that was once a part of the golf course.

Travis Oakman, 35, who lives in the Villages of West End neighborhood bordering the former course, talked about how he sees his neighbors use the space for playing catch, walking their dogs and enjoying the outdoors. He asked commissioners to consider the positive impact of Depot Park in Gainesville on its surrounding areas.

“I urge you, I implore you, I beg you: Please listen to the citizens of the community,” he said.

Ten of the attendees volunteered to donate their three minutes of public comment to professional land planner Thomas Hawkins so that he could give a presentation on WECARE’s stance on the development, highlighting why the group wants the site to remain recreational land. Hawkins said that property values around recreational land are higher, and residents expected that these spaces would remain.

After Hawkins’ presentation, others got up to speak about why they personally believed the land should stay recreational. Several spoke of the lack of parks in the Newberry and Jonesville area and said that once the land lost its recreational status, there would be no way to get that land back.

Jen Garrett of Newberry said her kids had been involved in golf at West End before it closed, and now it takes her 30 minutes to drive to Ironwood Golf Course in northeast Gainesville to practice.

Some stated that they are not against development, but want JBPro to find somewhere else to build that isn’t currently recreational space. In addition, other neighborhoods are in the process of being built nearby.

While some commission members did have praise for Brown’s proposal, they also remarked that because of its status of recreational land, they would not approve redeveloping West End. They also said that the county is interested in more density in residential areas rather than less.

Commissioner Raymond Walsh said that although he was disheartened by a proposal for recreational space to be taken away west of I-75, if it wasn’t for the land’s recreational zoning, the plot would have already been developed.

As for what could take West End Golf Course’s place and retain its recreational status, there is no current plan. Among ideas expressed by those who spoke at the hearing were a county park, basketball courts or another golf course.

Nicole is a reporter for WUFT News who can be reached by calling 352-392-6397 or emailing news@wuft.org.
Previous College stories: Florida students share their (sometimes) rocky roads to graduation
Next Nonprofit organizations in Gainesville awarded more than $6M in federal funds