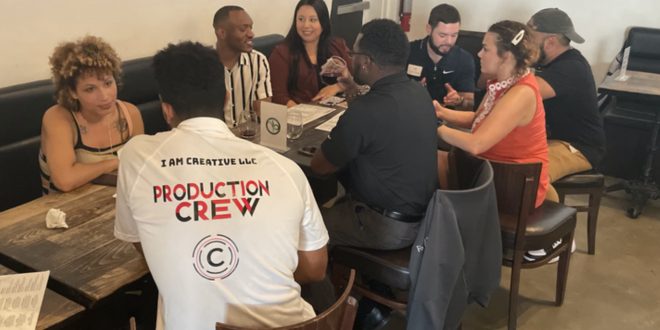 Events hosted by the program allow members to create personal connections, build their network, get involved with the community and explore Gainesville. “I think really the heart of it is to be able to have long-lasting connections with your career,” said Cynthia Hedman, the group's thrive chair. (Gabriela Rodriguez/WUFT News)

Sipping on cocktails and munching on appetizers, 50 people gathered at the Greater Gainesville Young Professionals’ monthly mixer at a restaurant in Celebration Pointe recently. Different owners and employees of local businesses who chatted with one another at MidiCi Neapolitan Pizza about personal and professional topics.

At the gathering was Julianne Raymond, the Greater Gainesville Chamber development manager, who is also the program director of Gainesville Young Professionals.

Raymond, 29, who moved to Gainesville from Jacksonville, longed for a support group to help her career grow after graduating from Santa Fe College, where she majored in theater, in 2013. Soon after joining the chamber almost five years ago, Raymond desired to create a group that would support young people working in her new city.

At the end of 2020, the chamber gave her the green light to create the program she had envisioned: Allowing members to connect with others while providing them with resources for career growth. In February, the program began.

“There is a huge need in our community for a support system like this,” Raymond said.

The program is for people ages 21-39 and who are involved in a post-graduate program, looking for work, working for a business and/or own one.

“I want them to find support, find comfort, find people they like here in our group,” Raymond said. “I hope we expand on a daily basis.”

For over a year, she and her team met with focus groups comprised of potential members from a variety of industries, all to create something professionals felt they needed.

And then the pandemic happened.

“We weren’t going to launch it when people were still locked up in their homes,” Raymond said. “We waited until we could at least gather outdoors and feel comfortable.”

Lauren Levitt, 28, parenting program coordinator at Project YouthBuild, serves as the program’s strive chair, helping members to identify volunteer opportunities and promote civic engagement. Levitt had members of the program participate in a celebration of high school graduates going to college. Some members also were on hand for the Great Invader Raider Rally, in which people collected invasive species plants around the city.

“This is a way for people to socialize with people who are maybe a little bit older outside of college and who have made Gainesville their home,” Levitt said.

Kierra Stover, 30, director of public marketing and public relations at Elevated Design and Construction, serves as the program’s communications chair. She got involved with the young professionals group because she saw a lack of diversity in terms of age and experiences.

“I mostly noticed was that it was always the same people going, and they always looked alike, and they were usually the same age,” Stover said. “It was not young people who looked like me.”

Stover said the organization offers young employees across the region a way to prove to their companies they have something to contribute, as well as a safe space to talk about mental health and stress in the workplace.

“I don’t think that’s really an opportunity people have many other places around here,” she said.

Emily Robinson, 28, events director and deputy executive officer of the Builder’s Association of North Central Florida, works as the discover chair of the young professionals program. Robinson said she plans events for members to explore Gainesville.

Earlier this month, members and their families toured the UF Performing Arts Center, the Florida Museum of Natural History and the Samuel P. Harn Museum of Art.

Born and raised in Gainesville, Robinson said she found herself introducing friends who moved here from elsewhere to local gems, but realized people who come to Gainesville for college too often quickly leave after graduation.

“We wanted to see if there was a way to entice them to stay,” Robinson said.

Cynthia Hedman, 28, product manager of Tower Hill Insurance Group, serves as the thrive chair of the group; she assists members on personal and professional development.

“I think really the heart of it is to be able to have long-lasting connections with your career,” Hedman said.

At the program’s launch on Feb. 3, Raymond said there were more than 200 people who registered for the event. She said word of mouth has carried the group on and that at least 30 people have attended at every event.

“Every event that I go to, there’s always at the very least one new face,” Raymond said. “That’s the kind of growth that I want to continue to see happen – is that people are inviting others that they think would benefit from this.”

Nafretha Brown, 33, of Rabell Realty Group, said she was interested in meeting new friends and not only looking for ways to serve the community but also to find other professionals who are passionate about their careers.

“I’ve been having a great experience,” Brown said. “The events I’ve attended have been different. So, I like that. It’s not redundant.”

During his time as a student at UF, Jonathan Evans, 39, owner at Sculpture Hospitality, said he didn’t realize the community outside of college.

“Now I feel like I’m part of a new community that’s separate but very much connected to the business community right now,” Evans said.

Karen Colwell, 36, the owner of B3 Gym, said she had begun to feel isolated within her own business – and that she particularly enjoyed a smaller event last month, where she was able to make deep and personal connections with others over a cup of coffee.

“It was just an opportunity for us to kind of talk about what things we’re struggling with within our business,” Colwell said.

Son Vo, 26, owner of the restaurant Swamp Boil, said he saw a good opportunity for growing his business and supporting other local ones through the group.

“I just want to help as many people as possible and get connected as much as possible,” Vo said.

Gabriela is a reporter for WUFT News who can be reached by calling 352-392-6397 or emailing news@wuft.org.
Previous The Point, May 10, 2022: How a former UF student ended up charged in a terrorism case
Next The Point, May 11, 2022: Several Florida property insurers are seeking to raise rates by over 20 percent