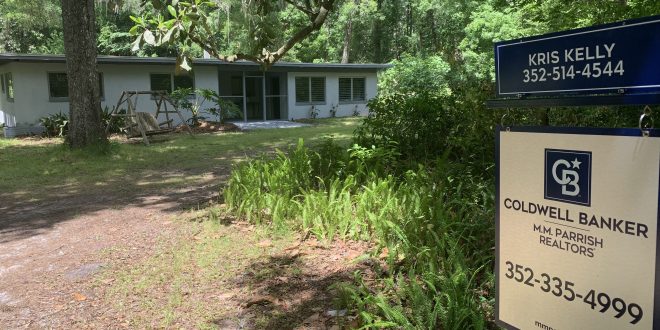 Amanda Kirby and her husband want nothing more than to raise their 3-year-old daughter in Gainesville — the place where they had lived for much of their lives.

They thought saving for the down payment would be the difficult part. But for a year now, the first-time homebuyers have been met with houses out of their loan range, houses that are overpriced for the condition they’re in and houses that sell before they have a chance to bid on them.

“It feels almost unfair that you’re working so hard for your money and to pay for a home that is just lacking for all the things that you want,” Kirby said. “Why would you wanna work so hard to pay for that?”

Kirby’s husband, who works as a plumber in Gainesville, has to drive daily to the city from the Lake City area, where the couple currently lives.

For two years now, many local homebuyers have slowly been priced out of the housing market. Gainesville, and the nation as a whole, is currently in a seller’s market. That’s when the demand for houses exceeds the number of houses being sold. Homes sell faster because buyers want to avoid competing with each other by getting into a bidding match. That scenario is advantageous for sellers because they can set higher than usual asking prices.

Kirby said she noticed that many houses listed are overpriced, but that the number of people ready to overpay has left them with little negotiation room.

Kirby said she and her husband have made serious offers on three houses. They were discouraged by the first house they bid on because they felt they couldn’t even throw their hat in the ring.

“A house that we fell in love with, it went in less than 12 hours,” Kirby said. “And it had so many offers on it that we couldn’t put in a backup offer.”

Their dealings with another house, on which they placed three bids, led to further frustrations. Kirby said the seller of that house was uncooperative, unwilling to do repairs they needed to obtain a loan and refused to negotiate the price. Eventually, the seller told them that they only accepted cash offers.

“Would’ve been nice to know in the beginning,” Kirby said. “We kinda felt like we were pushed around a bit just to end up all for nothing.”

Most sellers do not want to go through the extra steps involved when buyers secure financing through an FHA or VA loan, said Michael Kitchens, a realtor for Coldwell Banker M.M. Parrish Realtors.

“To find something under $200,000 for a first-time homeowner, it’s really, really tough,” Kitchens said.

An FHA loan is a mortgage loan the Federal Housing Administration offers homebuyers who may have a low credit score or can only afford a small down payment. VA loans, which are aimed at veterans looking to buy homes, are a little different. VA loans are issued by private lenders and are guaranteed by the VA so the buyer will get more favorable terms.

Debra Oberlin of Exit Realty Producers, who is Kirby’s real estate agent, said that first-time homebuyers are being outbid on a regular basis because they have a cap on how much they can pay under loan and price parameters, rendering them unable to make higher offers.

Instead, many sellers are accepting cash offers during a hot market to speed up the purchasing process and sell while prices are high.

Even before the pandemic, there was a slowdown in house listings, Oberlin said. COVID-19 exacerbated the issue because people did not want to show their homes to potential buyers who could spread the virus. Since COVID measures have loosened up, Oberlin said she has noticed that interest rates on loans have been rising.

The national U.S. housing market has flourished during the pandemic, with American homeowners gaining $2.9 trillion in additional home equity since the start of the outbreak.

Oberlin said she noticed that, in the past two years, there have been only 40 new listings for houses over a four-day period in April in Gainesville. She said this compares with 150-200 new listings over the same period in previous years. Homes for sale also have more buyers than usual bidding for a listing.

“So, for every home based on a price point, you will have possibly 10 buyers that want that home,” Oberlin said.

The increased competition has led many homebuyers to become frustrated with the process. Kitchens said he has observed buyers put in as many as 20 offers and still get turned down or beaten out by other buyers.

“Because of that, when there’s a lot of demand in our area, with not as many homes and properties to not only buy but even rent, it’s gotten to the point where it’s hard to even find a rental house,” Kitchens said.

With interest rates rising in the post-COVID landscape, Oberlin said she expects home prices will remain high and fewer homebuyers will be able to qualify for houses on the market.

Despite feeling like they’re fighting an uphill battle, Kirby said her family is lucky that they do not need to find a house right away. She said she has had to put herself in the mindset that she’s going along for the ride.

“You want to find that forever home, that place where you can put your sweat equity into,” Kirby said. “We’re looking forward to having that home where we can raise [our daughter] and have all those little characteristics and memories there.”

Thomas is a reporter for WUFT News who can be reached by calling 352-392-6397 or emailing news@wuft.org.
Previous The Point, May 6, 2022: First lawsuit emerges following repeal of Disney World’s special district
Next The Point, May 9, 2022: Gainesville home prices are up more than 10% from a year ago