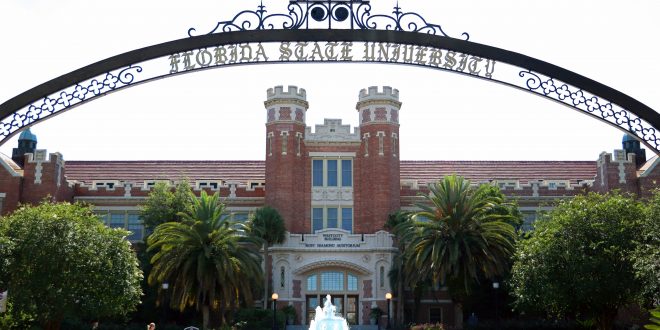 The University of West Florida in Pensacola said it had been unaware of the investigation at Florida State into Ross May, 38, when it hired him part time to teach two online classes after FSU had fired him. The university said in a statement it was reviewing how it examines the backgrounds of its instructors. (Lauren Witte/Fresh Take Florida)

Florida State University quietly fired one professor, suspended another who resigned a few months later and allowed a third to remain on the job after it was determined they committed sexual misconduct in separate incidents with students, according to disciplinary records.

One took a part-time job teaching at another Florida university.

The formal investigations were all previously undisclosed. At least one ran until this summer. In each case, investigators concluded that the three faculty members violated the university’s sex discrimination and sexual misconduct policies. FSU made no announcements about the cases or outcomes.

The investigative reports were obtained under Florida’s public records law. One of the cases illustrates differences in rules at Florida’s public universities and colleges regarding professors who have relationships with students: Some allow them in certain circumstances; others ban them.

The university fired Ross May, 38, its associate director of FSU’s Family Institute, which studies how parents can develop healthy environments for their children, over allegations that May pressured a student to get drunk, hugged her “in a forceful way” in a photograph and bet another student $50 he could have sex with her by the end of the semester. The incidents allegedly occurred during 2019, and the investigation was completed in May 2020.

May is currently teaching two classes online at the University of West Florida, according to documents obtained from the university. In an academic paper he published earlier this month with Frank Fincham, the Family Institute’s director, May said he was working as a researcher at the MD Education Institute in Miami, which he said was now defunct. In another paper he published this year with Fincham, on the subject of divine forgiveness, May was listed as working with the Healthy Relationships and Lifestyle Center in Broomfield, Colorado.

May said in an interview he agreed to leave FSU despite what he called unfounded conclusions from the investigation. “I honored their decision, and I was satisfied with vacating my position.” He added, “As someone who has spent considerable time trying to empirically understand the process of forgiveness, I apologize to anyone that might have felt slighted during the investigation, and I wish them well in their endeavors.”

“Us ‘mature’ guys like to work slowly – take our time and savor every minute,” he wrote, according to the investigative report.

Gilbert had been the university’s J. Herbert Taylor distinguished professor of molecular biology.

Gilbert also told the student he had named his sailboat “Blow me,” and invited her to travel to Japan with him, after he had separated from his wife, the report said. He was also accused of speaking derisively about former President Donald Trump, telling a student “she must be a Trump supporter in an insulting way,” the report said.

Another person at Florida State warned Gilbert, “Just watch you don’t get MeToo’d,” the report said — a reference to the social justice movement against sexual abuse and sexual harassment by employers that went viral in 2017.

Gilbert resigned a few months after the investigation concluded in April 2020 and is now a senior investigator at the San Diego Biomedical Research Institute.

Gilbert acknowledged to investigators he sent the sexually inappropriate email and another one like it, jokingly invited students to Japan and kissed a student on her neck. He said some other accusations were “hearsay, taken out of context, or false.” He said some of his behavior was caused by poor judgment after he separated from his wife and his son died by suicide, and said he was seeking therapy, according to the report.

Gilbert said in an interview that he was honest to investigators, had apologized to those involved and accepted the university’s two-week suspension before he resigned later.

The third investigation involved John “Read” Gainsford, a music professor still working in the College of Music. The university concluded after its investigation completed in July that Gainsford had improper sexual relationships with at least three students, even though he did not instruct or supervise them, because he holds “considerable institutional authority and influence within the college and subsequently over all College of Music students.”

During the investigation, Gainsford described one relationship as “friends with benefits” – meaning a sexual relationship without serious commitment – with a College of Music student he met on the Grindr online dating app. He said he also had a relationship with another student who he later married.

Gainsford acknowledged to investigators that such relationships were unwise.

“Students gossip among themselves and no good can come of that,” he said.

The student who initiated the investigation accused Gainsford of non-consensual sex on at least five occasions – including once when the student had blacked out from drinking, the report said, but the university concluded that was unsubstantiated. During Florida State’s questioning about those incidents, Gainsford said “that is not how I remember things,” and said he would never have nonconsensual sex with anyone.

Florida State also concluded that Gainsford did not create an intimidating, hostile or offensive environment because it was “more likely than not” that the student had agreed to Gainsford’s requests for sex.

Florida State permits professors to become involved in relationships with students as long as professors don’t have any supervision or authority over them, such as awarding them grades. In those cases, faculty are required to disclose the relationship to their department supervisors. The University of Florida in 2019 imposed an outright ban on sexual or romantic relationships between faculty and undergraduate students, regardless of circumstances.

This story was produced by Fresh Take Florida, a news service of the University of Florida College of Journalism and Communications. The reporter can be reached at tristan.wood@ufl.edu.

Tristan is a reporter for WUFT News who can be reached by emailing news@wuft.org.
Previous UF students and faculty protest First Amendment concerns
Next Company sues mother of murdered boys over husband’s $4 million life insurance payout; she says husband’s estate owes her $10 million