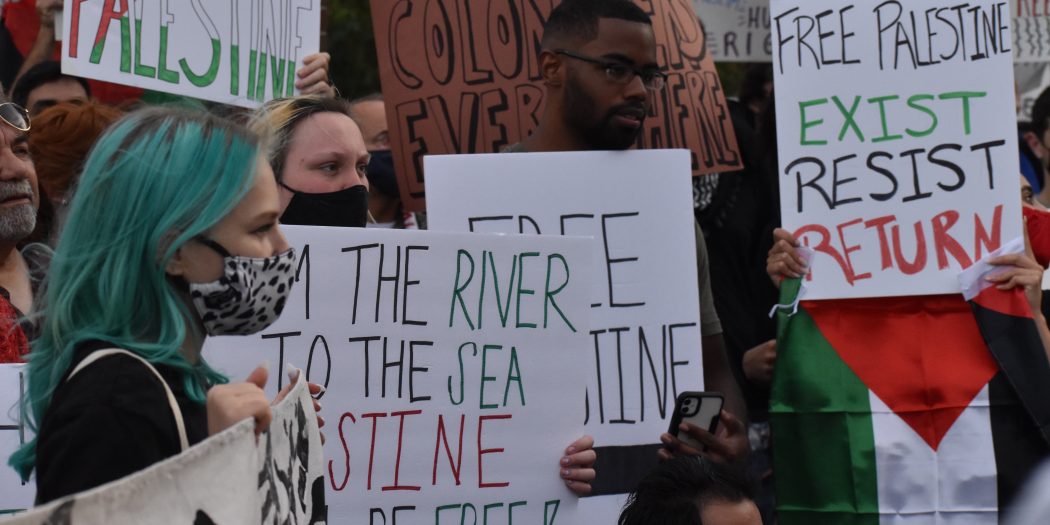 Hundreds of protesters carried signs in support of Palestine on the corner of 13th Street and University Avenue. (Grethel Aguila/WUFT News)

When Neda Jabbar visits Palestine, she has to fly through Tel Aviv — she doesn’t have a Palestinian passport, and there aren’t any direct flights.

But hours vanished whenever the 22-year-old Ocala resident did. Other passengers get off their flights and head straight into the city. Not Jabbar, however.

“They want to make it as hard as possible so we don’t come back and harder for these other people so that maybe they can leave,” she said. “And if they don’t leave, they’ll do it forcefully. That’s what they’ve been doing all these years.”

A wave of red, green and black on Wednesday flooded the corner of University Avenue and 13th Street in Gainesville as about 250 protesters united in solidarity with Palestine. The protest, hosted by UF Students for Justice in Palestine, is one of several across the U.S. in light of increasing tensions.

Israel has occupied the West Bank since 1967 and blockaded Gaza since 2007. But tensions resurfaced after Israeli police raided Al Aqsa mosque in Jerusalem, the third holiest site in Islam, during the holy month of Ramadan. Clashes continued, and Palestinian forces in Gaza then fired rockets at Israel, which sparked a retaliatory Israeli bombing campaign that killed more than 200 citizens in the enclave.

Students for Justice in Palestine president Leena Issa addressed the crowd to kick off the demonstration. Supporters clustered around, decked out in Palestinian flag accessories: anything from scarves and headbands to face paint.

“It is not a conflict,” she said. “It is genocide. It is ethnic cleansing. And again, it is apartheid.”

Protesters with ties to Palestine were invited to take the mic and share their stories. Some recited poems, including a Palestinian Arabic-language poem, sang Bella Ciao, an Italian resistance song, and detailed accounts of being unable to visit family in Palestine.

Firas Kobaissy, a 46-year-old UF professor, expected a majority Arab crowd. Instead, it was filled with people from different ethnicities and walks of life.

And he sees it as a sign that people are becoming more aware. They’re calling out the injustices Palestinians face. As a Lebanese, he also notices a new generation standing up for the occupied country.

“A lot of them are being killed now,” he said. “They are destroying the whole villages over there and buildings. And no one is saying anything. However, I think that will cause more recognition to the whole cause of Palestine.”

The conflict isn’t a religious fight, Kobaissy said. It’s not a battle among Muslims, Christians and Jews. It’s a result of an unbalanced use of force, she said, in which one side dominates the other.

“The whole international community is looking at them — ‘Oh, they are like terrorists, and they are doing something wrong,’” he said. “But in reality, they are defending their land.”

As night loomed over the sunset, the crowd’s chants soon blended with supportive honks from oncoming cars.

“From the river to the sea, Palestine will be free.” “[Israeli Prime Minister Benjamin] Netanyahu, you can’t hide. We charge you with genocide.” “Hey, hey, ho, ho: The occupation’s got to go.”

Jabbar said she was also surprised by the turnout, especially because Palestinians usually have to re-explain themselves every time something happens. But she credits this shifting dynamic to widespread use of social media.

To Jabbar, people now hear of Palestinians losing their homes like those in Sheikh Jarrah. So more people ask questions, dive deep and do their own research. But there are still issues with media coverage of Palestine, she said.

“When we do fight back, all the media says ‘Oh, there’s the terrorists. Look at them go’, which is ridiculous,” she said. “And everyone believes them because when they hear the word Muslim, they hear terrorist in their mind.”

The recent developments in Palestine are really nothing new. Similar events have occurred since she was born — since her father was young. She has heard stories about it forever.

But a 40-minute drive north on Wednesday showed her something is changing.

Grethel is a reporter for WUFT News who can be reached by calling 352-392-6397 or emailing news@wuft.org.
Previous Summer Camps Face Decisions About How To Operate As Pandemic Eases
Next The Point, May 21, 2021: NOAA Predicts At Least Three Major Hurricanes For 2021 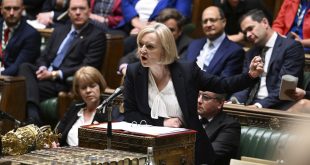