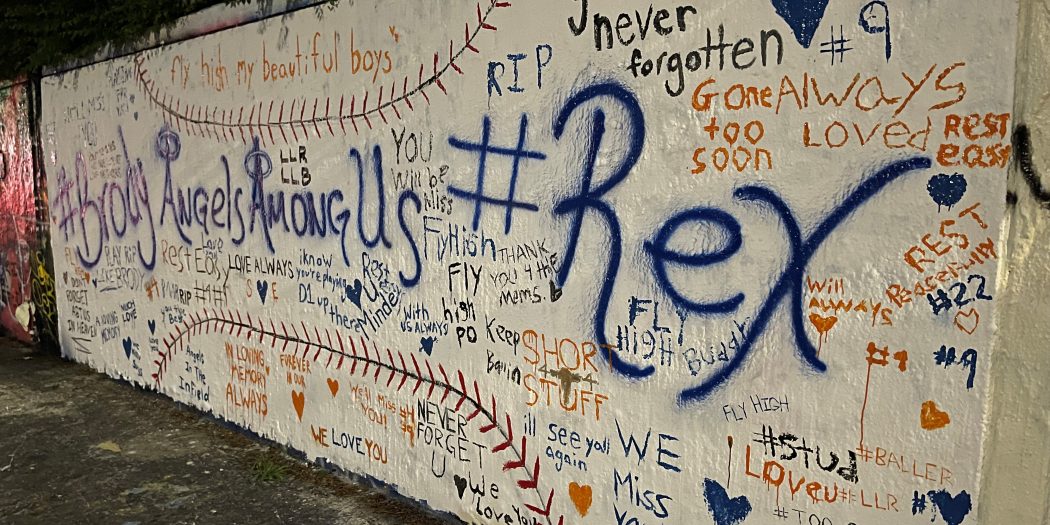 A mural painted Wednesday, May 5, 2021 on a city wall in Gainesville, Florida, honors the lives of youth baseball players Rex Reinhart, 14, and Brody Reinhart, 11, who were believed killed by their father, Paul O. Reinhart, 46, on May 4, 2021, at the family's vacation home near Suwannee in western Florida. (Fresh Take Florida)

Rex and Brody Reinhart, the two young boys believed to have been killed by their father this week, were elite youth baseball players known across the region for their passion about the sport. It defined their short lives.

Teammates, coaches and parents of players – along with the boys’ family members in Gainesville – have mourned their loss since the boys’ deaths Tuesday at their family’s burned waterfront vacation home near Suwannee in western Florida. Their mother, Minde Reinhart, 42, has been a fixture at ballfields across Florida cheering for her sons. The two had played since they were very young.

Brody, 11, was regularly an unofficial batboy for the No. 10-ranked University of Florida baseball team, seen by tens of thousands of fans at games returning bats to the home dugout after a hit. Rex, 14, was a dominant pitcher in his age group, coached on a travel team and admired for his tenacity by former Major League star Gary Sheffield, 52, of Tampa.

Through her grief, Minde Reinhart posted her first tribute to her sons on Facebook this week: “No words describe what I feel. But knowing they loved every second of life and baseball will keep their memories alive.”

A day later, she published a photo of both boys in their baseball uniforms, adding: “My babies!! #theywilllivewithmeforever.” Nearly 800 people quickly responded.

Baseball permeated the boys’ lives, cementing friendships even with rival players across Florida. The family is close friends with Florida coach Kevin O’Sullivan, who lives a short walk from their home. A painted mural on a city wall in Gainesville to honor the boys this week included baseball seams. When Brody delivered a book report in school, he chose a text about Willie Mays.

Players and their parents from across the United States, including Georgia, Mississippi and New Jersey, have offered sympathies and condolences for the loss of the brothers.

In an online tribute, Rex’s team, the Florida Heat, highlighted his talents on the field, his likability and his iconic look with his flowing, black hair curling from beneath a batting helmet.

“Rex made an immediate impact on the team and in the lives of his teammates, both on and off the field,” the team said in a statement. “He was kind, generous, funny, talented, and a bit of a fashion icon with his flow and sunglasses. His loss is profound and we are reeling.”

A rival player of Brody in Tallahassee, Brayden Smith, 11, said the two met after a game about 18 months ago. During a break between games, they found an open field and played a spontaneous pickup football game. They became fast friends and afterward communicated by Snapchat and text, usually about baseball.

“When we played against them, he pitched against us, and he pitched outstanding,” Brayden said, his voice breaking.

Brayden’s mother, Cherie Williams, said the travel ball community is tight-knit. She said Brody’s death affected her son deeply. He broke down in tears the night he heard about his friend’s death.

“It’s pretty hard to explain to a child why that happened,” she said.

The painted mural in the city included dozens of messages honoring the brothers, including one describing as inevitable that they would have played in the future for NCAA Division I teams: “Fly high my beautiful boys,” “gone but never forgotten,” and “I know you’re playing D1 up there.”

At Go Primal Fitness, the gym the family frequented, owner Chris White started a campaign to provide meals for the boys’ mother. Friends and family launched the “Rex and Brody Reinhart Memorial Fund,” to “honor the boys and support the causes they cared about.”

This story was produced by Fresh Take Florida, a news service of the University of Florida College of Journalism and Communications. The reporter can be reached at thomasweber@ufl.edu

Thomas is a reporter for WUFT News who can be reached by calling 352-392-6397 or emailing news@wuft.org.
Previous Ex-Congresswoman Corrine Brown’s Conviction Overturned
Next The Point, May 10, 2021: Details Emerge on Gainesville Family’s Murder-Suicide