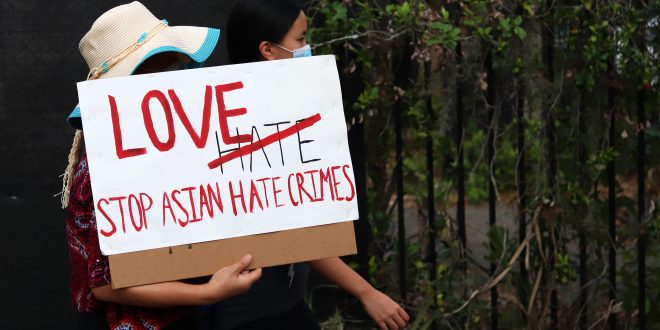 Jinnfon Punng, 55, carries a sign during the march from Bo Diddley Plaza to Depot Park on Saturday. (Lauren Witte/WUFT News)

‘What They Would Have Been’: Asian Students React To Anti-Asian Racism

Jyoti Parmar is left with only questions.

Parmar, founder and executive director of Anti-Hate Team, spoke Saturday in Gainesville at the Protect AAPI lives: A March and Vigil of Love And Solidarity about the shooting that happened on March 16 in Atlanta.

Over 250 people were gathered for the vigil at Depot Park on Saturday to show support for the Asian communities in Gainesville.

Nina Zhang, 18, Eastside High School senior, said her parents are from China, but she was born in the U.S.

“I should have a place here,” Zhang said.

Ophelia Lee and Flora Xu, both 13-year-olds in seventh grade at Lincoln Middle School, came to the vigil to speak up.

Parmar said that the worth of Asians is not dependent on what they contribute to society or how long they have been American.

“We matter because we are. And that’s enough!”

In earlier interviews, students in the community described how they felt about the recent events.

“It was like a punch to the gut,” said Sarah Joe, 21, an Asian-American and University of Florida junior studying plant science.

She said she was shocked when she heard about the shooting.

“This is what racism is. You don’t see them as fully human, and so you act accordingly,” Joe said, paraphrasing what a social media post she read after the shooting said. “I think that just really hit me.”

The shooting, in which six women in Atlanta’s Asian community were murdered, has led many people to wonder about the safety of Asian Americans.

“Some of my friends back in China were pretty concerned about me – am I being safe here — and (they) were kind of worried if the same thing is going to happen again,” said Xinyue Li, 20, a Chinese UF telecommunications sophomore.

The shooting has also brought focus to the rise of Anti-Asian racism and crimes in the U.S this past year.

California and New York had the greatest number reported with about 44% and 13% of the total, respectively.

One factor that contributed to anti-Asian racism this past year was the use of “Chinese Virus” to refer to COVID-19 by former President Donald Trump and other officials.

“I think it was shocking at first to hear leadership be so racist I guess or to hear – to feel so called out in that way,” Joe said.

Ryo “Leo” Iwata, UF spring 2018 microbiology graduate, said he only experienced COVID-related racism once, at the beginning of the pandemic.

Iwata was walking through downtown Gainesville when two people passing him in a car teased him about possibly having the virus. Other than that, he’s felt welcome.

“I think Gainesville is pretty tame, in terms of Asian racism,” Iwata said.

Still, racism existed before COVID-19 and beyond Gainesville.

“It’s been there all along, but I think COVID and the past – the shootings recently – I think amplified it and made it so that people are more aware of it,” Joe said. “But I think for a lot of us Asians, we’ve like kind of experienced this growing up, so it’s nothing new and it’s just really sad to see it on a more large scale.”

Joe recalled that when she was growing up, she would bring her mom’s food to school for lunch.

“Oh my gosh!” the boy sitting next to her said. “What is that? It smells so bad. It looks like dog food.”

Joe said that she was always careful about what food she brought to school after that.

Others were called names.

Iwata was called Bruce Lee and Jackie Chan and was asked if he knew how to do karate.

Once, UF freshman Kaylen Bui was called “zipper face,” referring to when a person gets run over by a tank.

Lee was called names like “sushi” or “rice cake” based on her Chinese snacks.

“But I was like, kind of uncomfortable,” Lee said. “But I didn’t want to say anything, because like everyone else was laughing. So I was like, ‘Haha, funny.’”

Lee and Joe said that the Asian community does not like conflict.

“So we’ll just like laugh it off ourselves, or we’ll even like laugh about it first,” Lee said. “Just to be, like, funny. But yeah, [it] actually hurts.”

“We like to suffer in silence – don’t like to make a big deal out of things,” Joe said.

That is why it means a lot when people reach out to check on their Asian friends and stand with the community, Joe said.

“We’re slowly finding our voices,” Joe said. “And when people give us the room for us to find our voices, and they’re there to listen and – I don’t know if validate is the right word? – But to listen to those experiences and learn from it without brushing it off, it means a lot.”

Lauren is a reporter for WUFT News who can be reached by calling 352-392-6397 or emailing news@wuft.org.
Previous ‘I Never Felt Sorry I Was A Girl’: Rosalie Miller and Kathleen Culver in The Fight for Women’s Rights
Next Gainesville Community Marches Against Racism, Mourns Loss Of Atlanta Shooting Victims

A traffic stop ended in a Gainesville Police K9 ripping out his eye. Terrell Bradley’s story is more than the police report