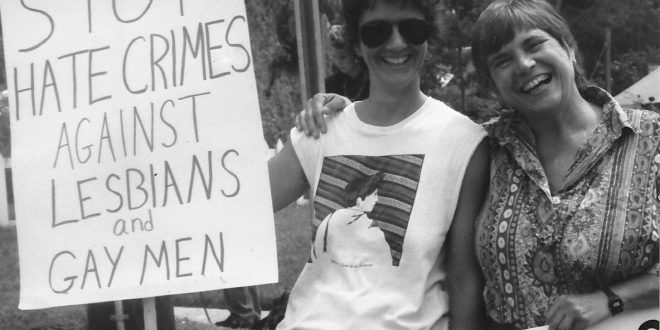 ‘I Never Felt Sorry I Was A Girl’: Rosalie Miller and Kathleen Culver in The Fight for Women’s Rights

Editor’s note: To celebrate Women’s History Month in March, below we profile two women who have been significant in the fight for equality in Gainesville.

Crowds were never a problem for Kathleen “Corky” Culver, 81. She loves to sing and dance, and even cheered all throughout high school. So, when the time came to lead women through chants and amplify their voices in the fight for women’s rights, Culver had no problem stepping in.

The eco-feminist and lesbian rights activist has always been a strong advocate for equality, from being involved in a sexual assault-awareness march on the University of Florida’s Fraternity Row to a 40-day peace walk that traveled from Gainesville to Key West in 1983.

“It felt amazing to just stand out there and say, ‘I’m willing to get out on the street and fight for our cause.’ All of it was thrilling and important,” Culver said.

Gainesville played a role in the second wave of the Women’s Rights Movement as home to multiple organizations that pushed for change in the 1960s and ‘70s. The reemergence of the movement really sparked after the formation of the women’s activist group, Gainesville Women for Equal Rights, followed by the publication of an academic paper, “Toward A Female Liberation Movement”, co-written by Beverly Jones and Judith Brown.

In 1971, The Florida Alligator editor Ron Sachs ran an insert listing phone numbers to contact for abortion services in New York, protesting Florida Statute 797.02. A year later, The Abortion Information Dissemination Service was established at the University of Florida by students.

It wasn’t until 1973 that abortion was legalized in the Roe v. Wade decision, but that didn’t stop activists in Gainesville from stepping up to support women.

Rosalie Miller, 76, was responsible for creating many of those spaces. In 1975, the co-founder and director of Women’s Unlimited founded the Women’s Center, Amelia’s bookstore and WomaNews, a feminist newspaper.

Over 40 years later, Miller and Culver worked together with other Gainesville women to create Celebrate Women 2020, a group established to celebrate the 100th anniversary of the passing of the 19th Amendment and the women’s rights movement, and to highlight women’s issues of today.

“The women weren’t in it for the stardom,” Culver said. “When people would ask ‘who’s your leader?’, we would all point our fingers in different directions.” These organizations weren’t the product of one person’s efforts, but rather countless hard-working women.

For Miller, Vivian Filer, a Gainesville Women for Equal Rights member and a civil rights activist, and Gerry Green, previous owner of Amelia’s bookstore, have been significant influences.

“I’ve been fortunate to know very many strong and powerful women who have done a lot of things in their lives,” Miller said.

Culver wants to see more women being recognized outside of activism as well. She believes women in entertainment and sports have been disregarded for far too long.

“I still don’t see good lesbian movies,” Culver said. “I’d like to see more of that. I’m really glad that more women directors are getting recognition and a chance.”

In 1991 Miller co-founded Lavender Menace, a women’s softball league where players of any experience level were welcome to join and play in each game. “We lost every game, but we had a wonderful time,” Miller said.

The Lavender Menace league, which started with just a single team of 20 women, grew to eight teams by the end of their time on the field in 2001.

To Miller, it was about the community and the joy of being together.

“Be present in the moment,” Miller said. “Be present and enjoy and live each moment.”

Miller recalls growing up in the ‘40s as the only girl in her household and not being able to do the same things that her brother could do. “I never felt sorry I was a girl, but I did feel discriminated against,” Miller said.

For both Culver and Miller, the fight for equal rights isn’t exclusive to women. “The Black Lives Matter movement and other movements are all essential in bringing awareness to and fighting against discrimination in our culture,” Miller said.

As one of the founders of Lesbians Empowered for Action and Politics, Culver organized meetings and marches in support of the lesbian community. Her involvement extended beyond feminism and LGBTQ equality and into environmental activism as well.

For Culver, every movement mattered.

“This is a quality of life issue,” Miller said. “We can’t just ignore one aspect, they’re all so entwined.”

This battle won’t be over any time soon. “I don’t think we should be complacent,” Culver said. “There’s a lot of people who really don’t want any of this to have happened. We have to keep at it. Freedoms have to be continuously nourished.”

Miller still hopes to see women achieve complete equal rights, with access to birth control and safe abortions. She said spousal abuse, rape, and all of the issues involving sexual discrimination need to be confronted and properly addressed.

The biggest takeaway from life? “Don’t let anybody make your decisions for you,” Culver said. “Don’t accept anybody else’s judgments and labels.” 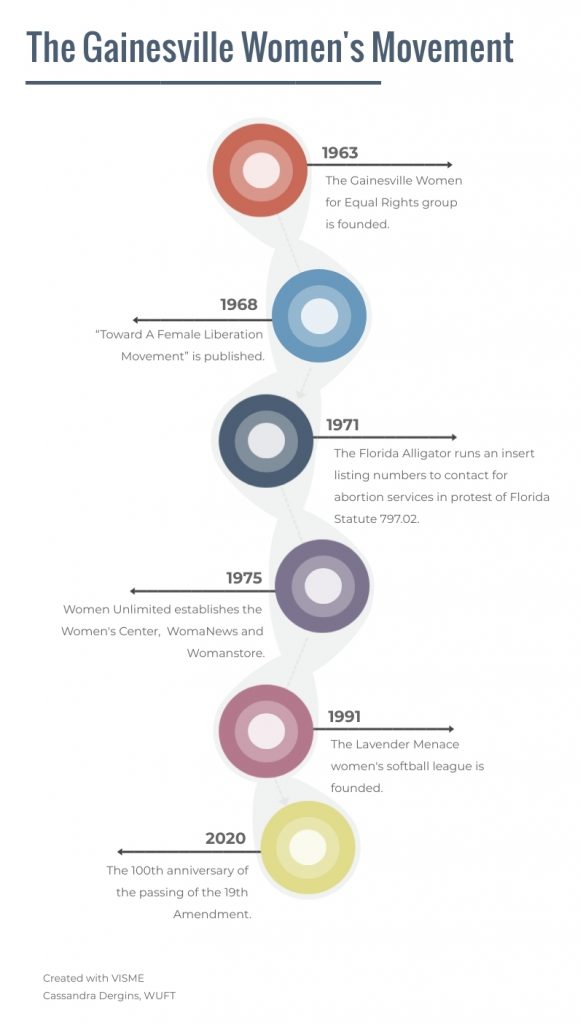 Cassandra is a reporter for WUFT News who can be reached by calling 352-392-6397 or emailing news@wuft.org.
Previous Author Jeannine Atkins Encourages Children And Women ‘Finding Wonders’ In Science
Next ‘What They Would Have Been’: Asian Students React To Anti-Asian Racism

Dozens of students lined up outside Shell Elementary School in Hawthorne Monday afternoon, waiting for their turn to climb aboard what looks like an ordinary school bus.