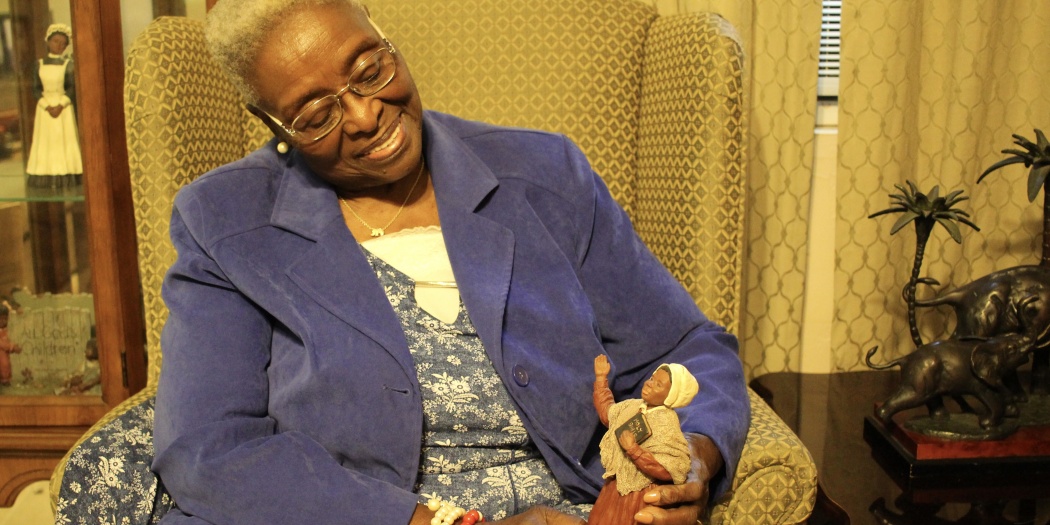 Vivian Filer gazes down in her Gainesville home at her figurine of Sojourner Truth, an 19th century women’s rights activist who is one of her “sheroes.” (Julia Mitchem/WUFT News)

When the activists traveled from Gainesville to meetings in Tallahassee in the 1960s, Jean Chalmers and the other white women ducked if a black woman was driving. They didn’t want to be seen by someone who would disapprove. The opposite was true if a white woman drove.

Also in the ‘60s, after hearing a University of Florida professor claim that no man respected any woman like he did another man, Beverly Jones, who was also white, was caught off guard. She later asked her husband what he thought. To her surprise, he agreed with the professor.

Now more than 50 years later, Jasmine Rivera, 21, of Miami, is an intern with Celebrate Women 2020. A fourth-year women’s studies and political science double major at UF, she is learning from the group of women liberators about hard work and how to fight for one’s rights.

Rivera also knows that the demands for equal rights they had then are still relevant.

“These issues are never-ending,” said the intern, who hopes to have a career working with and advocating for underrepresented minorities and disparaged communities.

On Aug. 18, 1920, Congress ratified the U.S. Constitution’s 19th Amendment, which gave women the right to vote in state and federal elections.

Besides commemorating the centennial, Chalmers, Rivera and other local residents are also noting Gainesville’s role as one of the birthplaces of the modern women’s liberation movement.

Borne of the civil rights era of the ‘50s and ‘60s, that liberation movement emerged in the late ‘60s and continued into the ‘80s. The movement aligned with feminist intellectualism and had as its demands economic, psychological and social freedom for women.

In August 2018, Celebrate Women 2020 formed to recognize the women who molded Gainesville’s role in the movement and to celebrate a century of females getting to vote.

Led by a committee comprised of women who were active back then, the organization has created a 68-page magazine to honor the liberators and to help set a course for the future.

“We hope you will appreciate that all of our current freedoms have been won through the actions of ordinary women (and men) who fought injustice,” the committee members wrote in a joint introduction at the front of the magazine. “The continuation of those freedoms and rights rely on our constant questioning and challenging any laws and institutions that perpetuate inequality.”

The committee had also planned a series of events for this month, which is Women’s History Month. Those activities have mostly been postponed or canceled because of the coronavirus outbreak. But the main event, a parade and rally, has been rescheduled for Sept. 26.

One was an academic paper, “Toward a Female Liberation Movement,” co-written by Jones and Judith Brown, a graduate assistant at UF.

The other was the group called Gainesville Women for Equal Rights (GWER).

Jones is now 92 and living in West Palm Beach with her husband Marshall Jones. After hearing that UF professor speak about not respecting women at a lecture, she started reading feminist literature and decided to write about sexism. Having earned a master’s degree from the University of California-Los Angeles, Jones soon questioned why she had followed her husband to Florida as a Navy wife before finishing her doctoral education at UCLA.

“It was a really painful but enlightening experience,” she said.

The couple moved from Pensacola to Gainesville after Marshall Jones became a professor at UF. He became active in the local civil rights movement and helped to spur student agitation for that cause. They had two small children, but she still served as GWER’s founding president.

GWER membership was half black, half white.

The white members tried to learn what their black counterparts were going through, such as not being able to go to movies or try on clothes in stores, Beverly Jones said.

“All these little everyday details of lives became more apparent and more educational,” she said.

Brown and Jones presented their paper at a national academic conference in Maryland in 1968. Their paper called for a new women’s movement and laid the groundwork for what would soon transpire in Gainesville, the four larger cities and across the nation, Jones said.

“It was a very good movement, and it certainly changed that area,” she said.

Chalmers, who served as Gainesville mayor from 1984-85, said many of GWER’s members were UF faculty wives, and that it was the state’s second-largest civil rights organization, after the National Association for the Advancement of Colored People.

“I was really willing to die for the cause,” Chalmers said.

Vivian Filer, 81, also of Gainesville, was another GWER member. She recalled society’s treatment of black citizens as “terrible back then,” and said everyone in the organization devoted their respective strengths toward furthering its success, even when it was hard.

“We just didn’t back down or back away,” said Filer, a retired professor of nursing at Santa Fe College.

Dan Harmeling, 78, of Gainesville, enrolled at UF as a junior for the fall 1962 semester. That coincidentally was the first term when African-American undergraduate students were admitted to the university; a black student had graduated from the law school the spring before.

Harmeling met Brown – they were both white – at a NAACP meeting; she introduced him to Students Group for Equal Rights (SGER), a group that had preceded GWER. In 1963, they went to a protest at a segregated movie theater in Tallahassee and were arrested.

They soon faced expulsion, but a student disciplinary committee found them innocent. However, UF’s president at the time, J. Wayne Reitz, cut them off from all financial aid, Harmeling said.
“This, in his mind, was conduct unbecoming of Florida students,” Harmeling, who would go on to teach mathematics at Bronson and Williston High Schools in Levy County, said of Reitz.

Consequently, Brown lost her graduate assistantship and dropped out of school, Harmeling said.

She later graduated from UF’s law school, then worked as a local attorney before dying of breast cancer in 1991, Peggy Macdonald, the former executive director of the Matheson History Museum, wrote in a Gainesville Sun article about the women’s liberation movement in the city.

‘Just women talking to each other’

GWER helped to integrate many local places such as the College Inn, the Boys Club and Alachua General Hospital, Macdonald wrote.

Pam Smith, 75, of Gainesville, started participating in women’s rights issues when she moved to the city in 1968. Women couldn’t get a credit card, buy property or get birth control, Smith said.

“It was through consciousness-raising, which was just women talking to each other,” she said of the modern women’s liberation movement. “Talking about their own personal experience with any number of topics.”

June Littler, 87, a retired librarian from Gainesville, joined SGER as a secondary social studies student at UF. Littler remembers thinking back then that somebody should help change things.

“I realized I was somebody,” she said.

As a part of SGER’s communications committee, she scheduled people for picketing at protests. She was among those arrested with SGER at the Marion County Courthouse in 1963.

Kathie Sarachild, 76, a freelance film editor, educator and activist from New York, studied history at Radcliffe College at Harvard University and is married to Harmeling.

Sarachild was involved back then with a group called New York Radical Women and met Brown and Jones at the conference in Maryland. They bonded over their feminist beliefs, said Sarachild, who remains aligned with Redstockings, another activist group from that era and which created a graphic showing Gainesville as one of the modern women’s liberation movement birthplaces.
These days, the leaders of Celebrate Women 2020 say the fight for equal rights continues.

Rosalie Miller, 75, of Gainesville, has a doctorate in higher education administration, an occupational therapist and also worked as a professor during her career.

“It’s really in Gainesville where my feminism really grew and came out and thrived,” she said.

Shirley Lasseter, 69, has been an activist since her sophomore year at UF. She lives in northwest Gainesville and was the cinema director at the Hippodrome for over 30 years.

“I’ve always loved film, and even as a kid I used to watch the credits to see, ‘Well, were there any women involved in this?’” she said.

Kathleen “Corky” Culver, 80, of Melrose, worked as an English professor at UF and Santa Fe College. She was also in one of the first lesbian consciousness-raising groups in the nation.

“I’m presently married to a woman, and I feel very happy to see all that progress,” Culver said.

Denise Matthews, 72, of Earleton, who has a doctorate in mass communication from UF, did a lot of work on campus against rape and sexual assault. She recalls “very vividly” growing up in the ‘50s and not having role models or the same opportunities as men.

“Unfortunately, it was a big issue that hasn’t gone away,” Matthews said.

Celebrate Women 2020’s magazine is called “Celebrating 100 Years of Women Voting & Gainesville’s Historic Role in the Modern Women’s Movement.” The magazine includes a timeline and articles about women who were active in the struggle then and now. It is available online through the Celebrate Women 2020 Facebook page.

The organization has an advisory board of over 20 women who come from diverse backgrounds. Filer, Littler and Chalmers are board members.

“In the meetings, I felt so empowered to be sitting at a table with women who really had made a difference outside themselves,” Filer said. Littler wants the next generation of voters to know why it’s important to do so in each election.

“It is not specifically your right and privilege,” she said. “It’s your responsibility.”

Another advisory board member is Lizzie Jenkins, 81, of Archer, executive director of a nonprofit focused on preserving the legacy of the 1923 Rosewood massacre in Levy County.

Jenkins said she votes in each election in honor of her great-grandmother Juliann Sams, who was sold as a slave in Mississippi at age 13 in 1839 – and forced to walk to Archer.

“For 58 years, I have never missed an election,” Jenkins said. “Every time I vote, I say to my great-grandmother, who was not able to vote, ‘Grandma Juliann, this is for you.’”

Julia is a reporter for WUFT News who can be reached by calling 352-392-6397 or emailing news@wuft.org.
Previous Unintended Consequences: Lawmaker Says He Never Meant To Allow Florida Colleges, Universities To Hide Details Of Pandemic Response Plans
Next Commissioners Argue Over What Level Of Coronavirus Restriction Is Best For Alachua County