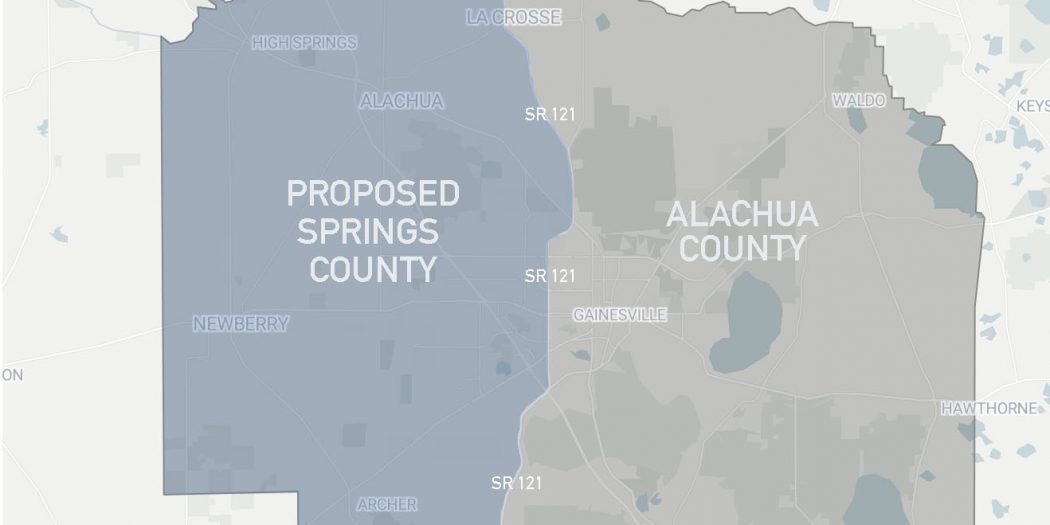 The proposed division between Alachua and Springs counties will give Springs County a large part of the west side. It would encompass Newberry, High Springs, Alachua and Archer. (Grethel Aguila/WUFT News)

Rural local governments, Willis said, “don’t have any type of seat at the table. Everything that goes on in Alachua County is controlled by the city of Gainesville.”

Willis is a backer of Springs County, a movement in western Alachua County to split and establish an independent county. It has attracted support from state officials and thousands of supporters who air out their resentment for the county’s current governance.

Many questions about the proposed county, including its very viability, remain unanswered.

Willis, 49, owns agricultural and hospitality businesses in Archer. As an Alachua County resident of 21 years, he feels frustrated with the county government’s treatment of its rural and predominantly conservative areas.

Infrastructure improves and develops in Gainesville, but that is not the case minutes from the city, Willis said. He cited in particular County Road 241, which connects Archer and Jonesville, as among the worst roads in the Alachua County route spiderweb. He said he has not seen the county try to expedite the $8.3 million project that’s slated to be completed between 2022 and 2024.

“Living in Archer, I hear about people driving on that road all the time that complain about how bad it is,” he said.

Origins of the secession movement

The movement blossomed from the frustration of residents who wanted more representation of the county’s west side from its five elected commissioners, Springs County co-leader Michael Tickel said. The proposed dividing point is 34th Street, also known as State Road 121. It would encompass most of western Alachua County, including Archer, Newberry, Alachua and High Springs.

While the idea was born six years ago, it gained momentum after the COVID-19 pandemic hit Alachua County last year, Tickel said.

The county commission’s response to the pandemic was overreaching, Tickel said. It highlighted how the commission focuses on the wants and needs of Gainesville and the University of Florida.

“We felt like it was more than what was required, more than what 90% of other counties in the state were doing,” he said. “They were treating Alachua County like the larger, more populous counties, such as Miami-Dade or Broward or Palm Beach County.”

With smaller cities at the forefront, the new county would bring harmony, Willis said. It would also attract homeowners, landowners and small businesses, which would revitalize towns along the State Road 45 corridor, too.

“It’d be more of a unity between all the cities in the county, not just one city dictating to the county,” he said.

When Willis first heard about the idea five years ago, he pictured it as a place for smaller cities and rural communities to amplify their voices. A place where those taxed would be represented — something he felt Alachua County has not been doing.

He thinks priorities in Gainesville — a city of about 132,000 — too often dictate priorities for the other 137,000 county residents.

A fervent but somewhat silent base of supporters

Not many supporters were as open to airing out their frustrations as Willis. WUFT News reached out to more than 50 Springs County supporters through Facebook messages, text messages and phone calls. Those who did respond were reluctant to publicly share their support with the media, leaving the movement shrouded in a sense of secrecy.

Despite thousands rallying behind the proposition, leaders continue to work through the details.

“It’s not an easy process and certainly there are a lot of question marks in the road,” co-leader Tickel said. “We know where we’re going, but how we’re getting there is an unknown.”

Aside from promoting less government, more freedom and lower taxes, the movement hopes to transform into a reality by 2025 — a century since the last establishment of a new county in Florida.

Gilchrist County morphed out of Alachua County for similar reasons as the current movement, Tickel said. Its namesake was former Gov. Albert Waller Gilchrist, who supported the schism.

Among the largest challenges is that there is no checklist for how to form a new county, Tickel said. The responsibility falls mostly on the state, but the state constitution does not spell out how a new county is formed.

Still, Tickel thinks the movement has support in Tallahassee. State Rep. Chuck Clemons in December promised to introduce a bill during the next legislative session to give organizers three years to list out a plan for the proposed county’s core services.

According to Tickel, the movement has other unnamed “friends in Tallahassee.”

“There’s nothing laid in stone yet,” Tickel said. “Our primary goal, at this point, is to get (Clemons’) bill passed.”

“We’re actually hoping to be creating that process that can move forward, so if other counties wish to do the same thing, there’ll be something on the books,” Marden said.

In an emailed response to a resident concerned about the potential split, Alachua County Commission Chair Ken Cornell said he spoke to Clemons privately and the state representative reassured him he was not going to introduce the bill without a financial analysis.

“He said ‘You have my word. This is dead on arrival. I’m not doing anything,’” Cornell later said to WUFT. “And he almost said that publicly.”

The eastern part of Alachua County has a lower ad valorem tax system, he said. Five counties around Alachua County already rely on subsidies from the state because they are fiscally constrained. Springs County would likely add to that total, according to Cornell.

“Every person that put pen to paper and put numbers down on a piece of paper has not said it’s feasible,” he said.

Clemons confirmed that he met with Cornell and clarified that he would only introduce the bill if the proposal’s organizers meet all prequalifications. He said they need to hire a forensic accountant to ensure that the county would be viable on its own.

The legislation would put a referendum on the 2022 ballot for locals to vote on the proposal, Clemons said.

“I think that people have a right to decide about their own governance,” Clemons said.

Looking ahead at the proposal

With a working plan in progress, Tickel said much of the county’s infrastructure would rely on what he described as a political divorce. Services and buildings, such as schools, ambulance bays, firehouses and police stations, would simply change possession.

“Anything that is west of the dividing line would then become the property of Springs County,” he said. “The people from Springs County have already paid for that.”

If the county splits, Alachua County will not need as many sheriff’s deputies, Tickel said. As law enforcement personnel already rely on the Florida Retirement System, they could move over to work in Springs County.

First responders would not be required to do things beyond the scope of their job, he added. Alachua County, for example, uses law enforcement as face mask enforcers.

“That’s not what they’re there for,” he said. “They exist to enforce laws, the laws that are set up by the state . . . not a mandate or a manifesto from the Alachua County Board of County Commissioners.”

Schools and teachers will largely remain the same, Tickel said. The only change would be a new school board. And the school board would approach education differently than Alachua County Public Schools.

“We want teachers to be teachers,” he said. “Teachers did not sign up to be more than a teacher or to be an administrator or a test proctor or a babysitter.”

The plan for utilities is still up in the air, Tickel said. If the infrastructure exists, it would not have to be repurchased. Leaders are considering contracting Gainesville Regional Utilities, Clay Electric, Duke Energy or Florida Power and Light.

Aside from core services, government social programs that are often vital to communities will instead be run by the private sector and charity, Tickel said. Publix and Walgreens, for example, would do a better job with COVID-19 vaccine rollouts than the local health department, he believes.

“We feel like private industry can do, and does do, a much better job at those social services than any government agency can ever hope to,” he said.

Tourism from the surrounding springs would be a main industry, Tickel said. The county would also be friendly to businesses and would not require any additional licensing for special projects, such as construction.

“With businesses come jobs, and with jobs come people that fill those jobs,” he said. “We would welcome any industry, any business that wants to come in.”

Despite rocky plans, the movement has branded itself with the trappings of a legitimate county.

Tickel sported a handmade blue-and-green marbled mug with the county’s logo imprinted on the front. More merchandise, including yard signs, shirts and hats, are available at the Springs County Welcome Center, located at 18725 N. Main St. in High Springs.

The center opened with a ribbon-cutting ceremony in December and is a place for supporters to rally for the proposal, Tickel said. The items sold there give supporters the opportunity to show off the proposition and help offset operation costs.

With more work pending, Tickel and Marden envision Springs County as a home where residents feel represented. A place where voices like Willis’ are heard.

Grethel is a reporter for WUFT News who can be reached by calling 352-392-6397 or emailing news@wuft.org.
Previous You Can’t Recycle That: What Actually Should Go In Gainesville’s Blue And Orange Bins
Next The Point, March 15, 2021: Rounding Up The Floridians Charged In The U.S. Capitol Attack