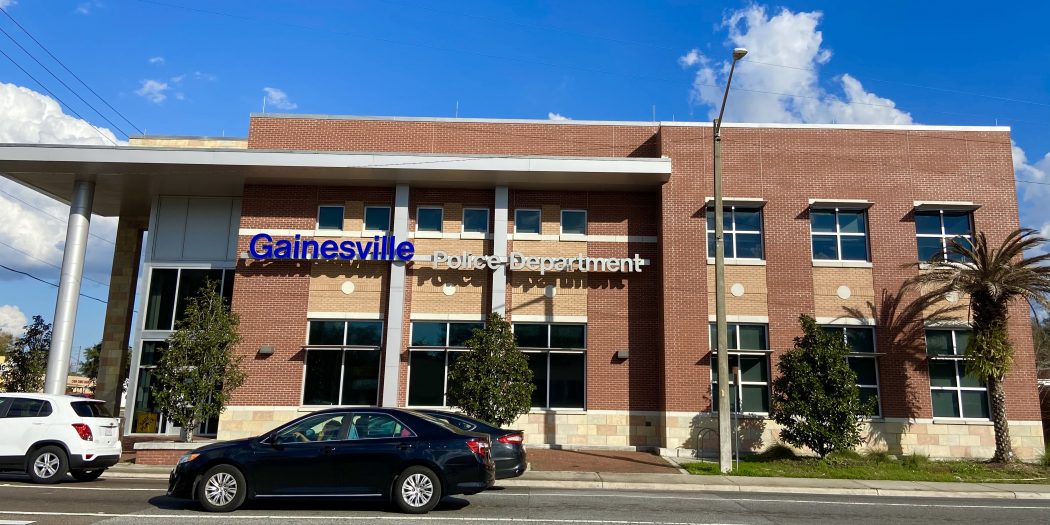 The Gainesville Police Department is a key player in the implementation of the city's updated pre-arrest program. (Haleigh Donahue /WUFT News)

In an effort to lower arrests and decrease pressure on the local criminal justice system, the city of Gainesville is making strides to enhance its own diversion and deflection program.

Diversion and deflection programs are designed to move individuals who have committed low-level crimes away from the criminal justice system. People who complete the program retain no charges on their criminal record.

The city’s deflection program, titled the Gainesville Pre-Arrest Program, was updated in January. Now, police issue pre-arrest referral forms that direct people to the program instead of requiring them to appear in court.

Low-level amounts of cannabis, which the state of Florida defines as an amount under 20 grams, may also be included to qualify for the program, said William Halvosa, retired Gainesville Police Department captain and current coordinator for GPD’s program to address disproportionate minority contacts.

The number of times a person has committed a misdemeanor crime is also taken into consideration for program referral.

“We have to be able to go through and make a determination and consider is this a person’s third time or one hundred and third time,” said Darry Lloyd, public information officer for the State Attorney’s Office of the Eighth Judicial Circuit. “Is diversion working for this individual?”

In the updated program, individuals are referred to the local state attorney’s office where they meet with a prosecutor to figure out a program-based solution that fits the nature of the crime, Lloyd said.

Since the election of state attorney Brian Kramer in November 2020, the program has faced significant challenges and delays in its implementation.

Lloyd explained that a pre-arrest program was enacted in Alachua County in 2018 under former State Attorney William Cervone.

“We’re all in favor of trying to minimize very minor offenses that could end up in court,” Lloyd said. “That’s why Mr. Cervone created the diversion program three years ago, so folks won’t have to go to the courthouse or get engaged in the criminal justice system.”

Gainesville City Manager Lee Feldman said the city would like to make modifications to the existing pre-arrest program put in place by Cervone. To do this, though, the parties involved, most notably the state attorney, the Gainesville city manager and the Gainesville City Commission, must come to an agreement on the terms of the program.

Feldman and the city would like to clarify the program’s eligibility requirements. The city also wants to make sure that the program can be afforded by all those who take part. Fees for this program can range from $100 to $250.

“We want to be clear that indigent neighbors are not going to be charged for this program,” Feldman said.

Cervone was adamant about finalizing the terms of this program before the end of his term of office.

Since being elected, Kramer has not had an opportunity to fully review all of the details of city’s pre-arrest program, Lloyd said.

During the Gainesville General Policy Committee meeting on Jan. 28, Feldman described the progress being made with the new state attorney as “moving back to square one.”

Despite the lack of official agreement on the full terms and policy of the program, Gainesville Police Department’s Pre-Arrest Program was implemented on Jan. 18, 2021.

“At the same time that we’re running the program, we’re still working out some of the mechanics,” Halvosa said. “I think that the chief of police really just wanted to lay the foundation to show that we are ready to roll.”

Gainesville police officers were trained on the new program and are currently issuing pre-arrest forms. The training on the program was received well by officers, Halvosa said.

He explained that through the GPA program, the police department can track how many people are getting the opportunity to successfully complete the accountability program and get through it without being criminally charged.

“We like to really evaluate what we’re doing, what’s effective and try to understand why some folks aren’t getting that opportunity or successfully completing the deflection program,” Halvosa said.

Though the GPA program is being run parallel to its development, Halvosa is confident that an agreement on the full terms of the program will be reached by all parties sooner than later. He explained that the implementation of this program has been made a priority by those involved, including the state attorney and the city manager.

“It’s in its inception right now, in its very beginning,” Halvosa said. “We’re certainly optimistic that we are going to have a very robust and fruitful pre-arrest program.”

Haleigh is a reporter for WUFT News who can be reached by calling 352-392-6397 or emailing news@wuft.org.
Previous A New Bill Could Change The Way Florida Handles Children’s Mental Health
Next Neighbors Work To Keep Shuttered West End Golf Course A Green Space