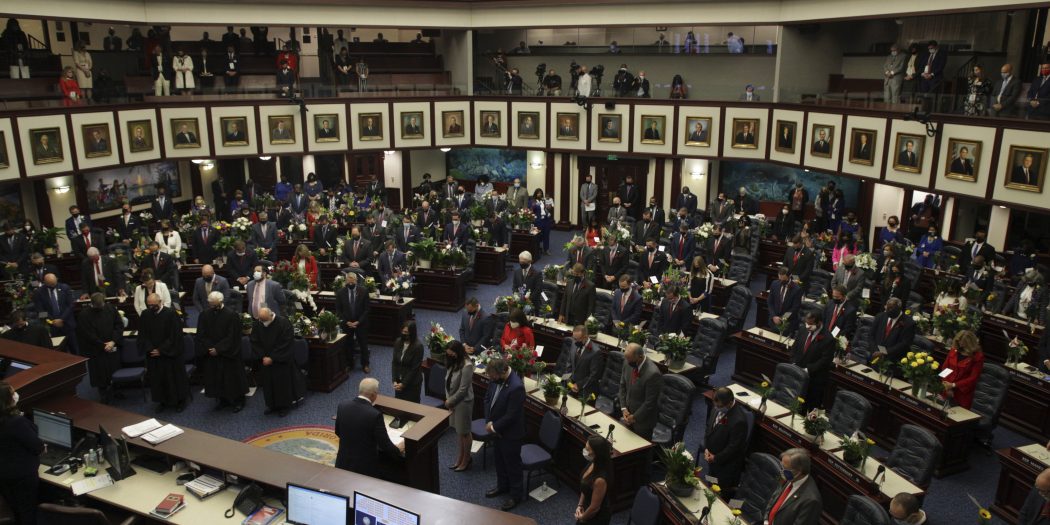 Legislators attend the first day of the 2021 Legislative Session at the Capitol in Tallahassee, Fla., Tuesday, March 2, 2021. (Tori Lynn Schneider/Tallahassee Democrat via AP)

TALLAHASSEE — The Florida Legislature opened a 60-day session Tuesday that will take on the business of running the country’s third most populous state while tackling a slate of potentially controversial measures — from shielding businesses against COVID-related lawsuits to clamping down on protesters who turn violent.

The state Senate and House gaveled into session with members donning face masks on the floors of their respected chambers. Bouquets festooned House desks and the dais of the Senate floor.

During his State of the State address, Gov. Ron DeSantis said he would looking forward to working with lawmakers on the key issues facing their state.

Both chambers, which are controlled by solid Republican majorities, will be helmed by new leaders: House Speaker Chris Sprowls and Senate President Wilton Simpson.

Sprowls challenged his fellow lawmakers to focus on meaningful, complicated and sometimes difficult legislative measures and not “spend our days chasing praise on Twitter.”

“They want to reframe session as being about only the subset of issues that they care about, or — worse — they want to turn everything into a make-believe boxing match between the House and the Senate or the Legislature and the Governor,” he said.

Yet in his own State of the State address, the governor focused much of his remarks on the headline-grabbing measures he has advocated at recent news conferences.

Over the months, DeSantis has laid out his priorities: Winning passage of a so-called anti-riot bill, reining in Big Tech companies that invade privacy and — the governor and the House Speaker contend — muzzle conservative speech. Earlier this week, the governor encouraged the Legislature to limit theft of intellectual property by foreign entities, singling out China, Cuba, Iran, North Korea, Russia, Syria and Venezuela.

“The priorities we’re seeing from our state leaders so far worry us. Instead of immediately trying to pass something that directly helps the people of Florida, we see political distractions,” House Democratic Co-Leader Bobby DuBose said.

Although it was the first day of the session, lawmakers have been traveling to Tallahassee for weeks to begin committee hearings on the measures that could eventually make to the governor’s desk. More than 2,500 bills have already been filed, but only a fraction will be heard and fewer still will become law.

The only action lawmakers are obligated to take is passing a state budget. Earlier this year, Gov. Ron DeSantis proposed a $96.6 billion budget for the fiscal year that begins July 1, or $4.3 billion more than the current budget.

While Republican lawmakers have signaled their support for the governor’s initiatives, they will have their own priorities. The coronavirus pandemic will weigh heavily on the budget and the legislative agenda, including in how lawmakers conduct their business.

“Over the next 60 days, we will address areas for improvement based on lessons learned throughout the pandemic,” Simpson said in opening remarks.

Simpson said a key priority will be to address the state’s pension fund as its financial liabilities escalate and become “the single largest threat to Florida’s balance sheet.”

Simpson noted that in 2012, when he was first elected, the unfunded liability of the state’s pension plan was $21.6 billion. Today it is $36 billion, he said.

“It is important for us to recognize that unchecked and unchanged, our pension system will continue to take a bigger share of our state budget which will crowd out funding for other priorities,” he said.

In their response to their Republican counterparts, Democrats laid out far different approaches — a progressive agenda with little chance of gaining traction that focuses on climate change, alternative energy and expanding the social safety net.

“Despite the wide path of destruction COVID cut in Florida, and the heavy toll it took in and on Floridians’ lives, the governor and Republican lawmakers have crafted legislation to muzzle our people and restrict our speech, instead of giving our health and economy the attention that they so desperately need,” said Sen. Gary Farmer, the top Democrat in his chamber.

Agriculture Commissioner Nikki Fried, the only Democrat serving in statewide office and who is considering a run against DeSantis, said she was disappointed by the governor’s agenda.

“His priorities are really not the people’s priorities,” she said during a news conference. “By prioritizing Big Tech companies, social media — that’s not the priorities of the people of the state of the Florida. He’s missed the ball.”