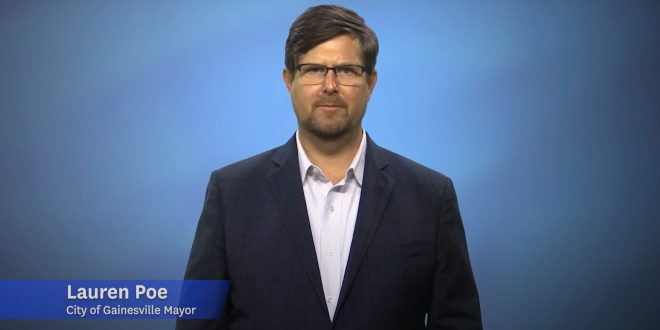 Mayor Lauren Poe presented the annual state of the city address via a 20-minute pre-edited video livestreamed Wednesday. “In Gainesville, we are committed to improving quality of life for all neighbors to create a community where people are not simply satisfied, but feel rooted in this community through a genuine sense of place,” he said. (Rebecca Grinker/WUFT News)

Since 2005, Gainesville residents have witnessed the annual state of the city address together in a public space. Consistent with changes over the most unusual 12 months, though, this year’s event was like no other, with the mayor narrating a pre-edited video streamed online Wednesday.

“2020 challenged us in ways we never thought possible,” Mayor Lauren Poe said in a 20-minute address aired live on the city’s website, YouTube and Facebook page and on Channel 12.

“We faced off against a global pandemic, deepening political polarization, a rise in white national and fanatical extremism and racial injustices that shook us to the core,” Poe said.

Assisted by several key city leaders and partners, the mayor sought to list what he said were the city’s accomplishments in 2020 and to introduce its new goals for this year.

Gainesville and the Florida Department of Health are working together to provide COVID-19 vaccinations for targeted local residents, Poe said. The city’s mobile testing program has supplied nearly 900 free coronavirus tests to vulnerable residents, he said.

“Gainesville will continue to lay the groundwork for a public health policy that will eliminate health inequities and provide access to high quality care for all of our neighbors,” the mayor said.

Poe said the city’s relief fund and recovery efforts provided more than $1.5 million in financial assistance to more than 100 local businesses and 700 neighbors. The Farm Share program distributed nearly 656,00 pounds of food to more than 119,000 people, he said.

Working with the Greater Gainesville Chamber of Commerce, the city launched the Feed GNV Program, which provided access to nutritious meals for vulnerable residents while also offering cash to local businesses. Over an eight-week period and thanks to 42 restaurants, more than 3,100 meals were served to needy residents, Poe said.

Turning to the reckoning on social justice and police reform, particularly after the killing of many unarmed Black men at the hands of white officers, Poe defended the community’s right to peacefully protest. He said he was proud of the social justice mural project at locations citywide, and vowed to continue working to create a future in which everyone feels welcomed and loved.

“It has saved this community countless dollars of incarcerating individuals,” Jones said of the effort to pair a mental health specialist with a police officer on patrol. “But even more, it has helped those individuals in their road of recovery.”

In light of the recent pedestrian deaths near the University of Florida campus, Poe said system designers and policy makers are prioritizing education and enforcing traffic laws. The city will continue to work with the Florida Department of Transportation to help better ensure that human error does not result in more serious injuries or fatalities, he said.

The mayor also announced Housing First Approach, a new program he said would aim to ensure that every neighbor has a safe place to call home.

Affordable housing and zoning are other issues city officials plan to address this year.

City Commissioner Adrian Hayes-Santos disclosed goals to revamp related ordinances to replace exclusionary zoning from city regulations with something more inclusionary. The former has been used for decades nationally to keep lower-income people out of wealthy and middle-class neighborhoods; the latter involves producing affordable house through private markets.

Poe said the city would create a community land trust, form partnerships with area employers to create employer-assisted housing options and create an inventory of underutilized land that may be suitable for more affordable housing.

The city commission unanimously approved a comprehensive set of “renters’ rights” protections last year. City Commissioner Reina Saco said a greater number of inspections of rental properties would happen in 2021 to make sure they are safe and energy efficient.

In 2018, the city set a goal to have 100 percent renewable energy by 2045. In July, it announced plans for a 50 megawatt solar farm for the Gainesville Regional Utilities fleet. The city continues to seek affordable alternatives to fossil fuels, and its solid waste division has an 18-month pilot project to recycle organic materials and keep methane out of the atmosphere, Poe said.

The mayor also discussed efforts to address the issue of social inequality. With help from the Rural Women’s Health Project and financial support of two grants from Welcoming America, the city will assemble community leaders to create a multi-sector immigrant inclusion strategy.

“Immigrants play a key role in driving economic growth in our community,” Poe said. “They enrich academic circles and add immeasurably to the richness of Gainesville’s art, cuisine, entrepreneurship and music scenes.”

Over the next six months, the city will partner with communities historically left out of the planning process to identify how current policies and actions reinforce racial inequity, he said.

A new initiative called Imagine GNV would over the next decade drive discussions about a broad range of matters, including where new homes are developed and what they look like, new bus routes, where public housing is located and how it fits into existing neighborhoods, how the city invests in public property, and how the city will go about approving new development.

“There is no vaccine for the structural and institutional injustices that persist,” Poe said. “These systems and structures have endured over centuries and the work to eradicate them will not be easy.”

Poe also outlined five goals that he said should be the foundation for all future decision making: equitable community, sustainable community, a great place to live and experience, resilient local economy and “best in class” neighbor services.