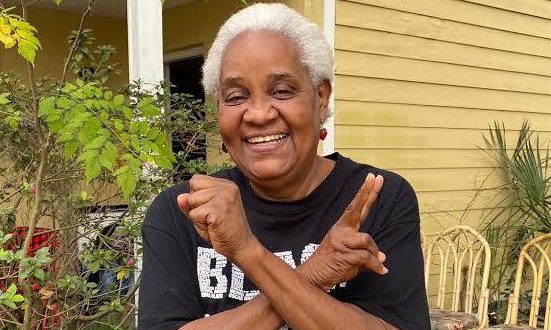 Prominent activist and community organizer Faye Williams has been at the forefront in pushing for change to relics of the Confederacy in Alachua County. (MacKenzie DiLeo / WUFT News).

With One School Name Change Down, Gainesville Activists Push To Topple Other Confederate Reminders

Faye Williams is eager for more.

After successfully advocating for the relocation of a Confederate statue and changing the name of a local school, Williams has been working to address racism in her community. The prominent activist and community organizer embarked on her efforts when she returned home to Gainesville in 2012 after living in Washington, D.C., for three decades.

She successfully advocated for the relocation of the Confederate soldier monument on the southeast corner of East University Avenue and South Main Street in Gainesville that had stood there for over 100 years.

The relocation of the monument in 2017, locally known in its final years at that spot as the Old Joe statue, marked the beginning of a so-far fruitful endeavor to rid Gainesville of its remaining Confederate ties.

This past August, the Gator Chapter of NAACP along with Williams and other activists in the community successfully spearheaded the effort to change the name of an elementary school named after Confederate brigadier Gen. J.J. Finley.

The school, at 1912 NW Fifth Ave., is now named Carolyn Beatrice Parker Elementary School. Parker was a Black physicist from Gainesville who worked on the Dayton Project, a division of the Manhattan Project.

“The name change that happened this summer, in my mind, was long overdue,” Alachua County School Board Member Rob Hyatt said.

The activists feel they now have an infrastructure for change in place thanks to a willing school board and the support of Interim Schools Superintendent Dr. Carlee Simon. They’re now targeting additional school name changes by, they hope, this summer.

The Sidney Lanier Center, 312 NW 16th Ave., is at the top of their list, according to Rachel Khoury, the external vice president of the Gator Chapter of NAACP.

Lanier was a poet, author and musician born in 1842. His talent at a young age had him considered as a budding genius, and he enrolled in college at age 14. He later accepted a job at the college where he worked until the outbreak of the Civil War.

Lanier was summoned in 1861 to enlist in the Confederate Army, in which he became a private. He returned home four years later and soon published his first book, Tiger Lilies, which discussed the hardships of war. He later published one of his most famous poems in 1874, and he continued writing poetry until 1880.

Residents in southern states grew fond of Lanier’s poetry, yet given his ties to the Confederacy, activists feel that it is inappropriate to name a school after him.

Hyatt actually attended the Sidney Lanier Center for seven years, from grades K-6. At the time, he said, no one talked about the roots of the school’s name.

Today, though, Hyatt does not foresee opposition from any of the board members, including himself, over name changes.

Why, then, hasn’t the change been made yet? The primary answer is the pandemic.

Hyatt explained that between transitioning students back to in-person learning amid the pandemic and also trying to embark on a complete rezoning of the district, changing school names is not necessarily toward the top of the board’s priority queue.

Still, he said the board will not overlook any requests to have the name changed, and Hyatt acknowledged the impact of changing the name of former J.J. Finley Elementary School.

“The results have been outstanding,” Hyatt said. “I’m certainly pleased that was finally done.”

Hyatt doesn’t see the immediacy for changing additional names, but he respects the community’s desire for future name changes.

More specifically, he thinks thoughtful emails from community members could allow the initiative to gain momentum. Hyatt explained there is an ad hoc committee that studies the requests for name changes. They meet a few times and will often recommend a new name after deliberation. Once there is a recommendation, the board will then discuss and vote on it.

The official greenlight to proceed would then have to come from the Florida Department of Education. If approved, the name change will take effect the subsequent academic year.

Foster was an American songwriter whose songs depicting African Americans have been controversial. Foster’s minstrel songs in particular mocked and dehumanized enslaved Blacks.

Williams believes that while changing the names of local schools is a step in the right direction toward addressing racism, she still feels Gainesville has a long way to go in continuing to remove all its racist ties.

In addition to there being Black school board members, Black city commissioners and Black county commissioners, Williams believes in giving power to the people for them to invoke change.

Khoury also feels that this is just one way to shed light on Gainesville’s history and understand how that history still contributes to racial disparities in Alachua County. She says the Gator Chapter of NAACP and other local activists will continue to address them.

“A name change is just one step toward truth and reconciliation when it comes to really getting down to hash out the racial disparities that affect our students,” Khoury said. “It brings light to the issues we really do have and the legacy of Jim Crow and racism in America.”