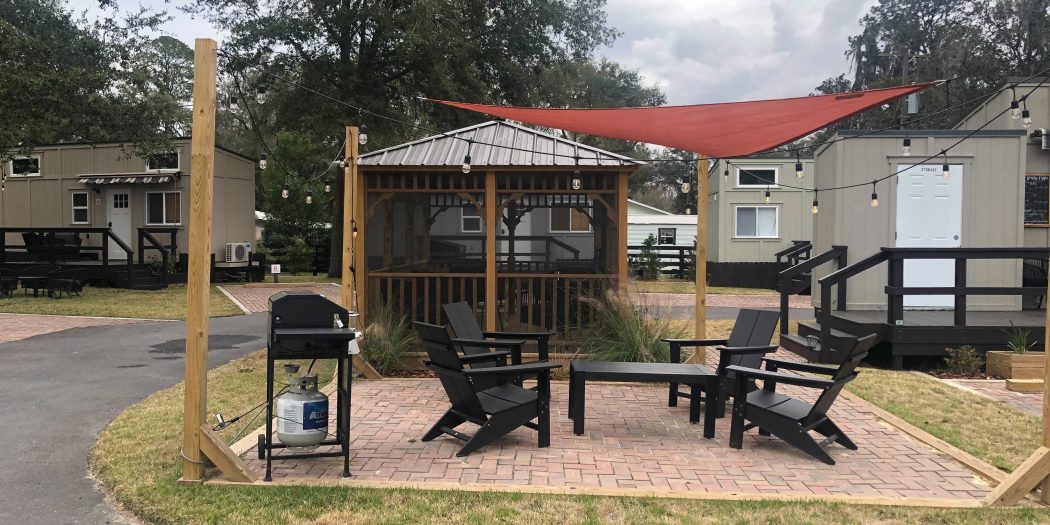 The patio area of Homestead Tiny Resorts gives people a place to relax and enjoy a cup of coffee. (Charlene Medders/WUFT News)

Williston has a population of less than 3,000. But Homestead Tiny House Co. chose it as the location for a new tiny house resort that opened in July. Sales and marketing manager Chase Crandell said the “goal from the start was to pick a place that was going to become the new tiny house center of the Southeast.”

Homestead Tiny House Resorts of Williston is comprised of a coffee shop and seven houses, 270 square feet each, available for rent.

Sabrina Artman, who has lived in Williston since she was a child, said she fell in love with the resort the day it opened. She says the resorts environment and the Sad Donkey Coffee shop, along with the people who work there, made her dream of having a coffee shop in Williston finally come true.

“It’s like a little gem in a small hidden town that a lot of people don’t know about,” Artman said.

Though the resort opened during the peak of COVID-19 cases in Florida, it stays busy, Artman said. She noticed the place was booked when she went to grab a coffee one Sunday afternoon. She saw cars with license plates from south Florida, Georgia and even Louisiana.

Sarah Errafay, a travel blogger from Orlando, Florida, said she found the resort after searching for coffee shops nearby while visiting Devil’s Den Spring. The popularity of the coffee shop’s Facebook page convinced her to experience it for herself.

After going to the resort, Errafay met the property manager, who showed her one of the houses. While she originally didn’t plan on staying at the resort, she and her mother ended up staying one night. She said she liked the idea of the tiny house being fully theirs, and she didn’t feel like she was staying in a hotel.

“Everything is kind of yours,” she said. “And you’re not sharing like a big space with a ton of people.”

Crandell said the team chose Williston to be the home for this resort because of the city’s potential. There are several noticeable sights like Devil’s Den Spring and Cedar Lakes Woods and Gardens. It also provides a more laid-back experience for people visiting bigger cities in central Florida, he said.

Crandell said this development was in the making for a year and a half. Although, COVID-19 pushed the opening date from April to July. He said it took about nine months from picking Williston as the home for this resort to prepping the site for the houses to come in.

The renting process is easy, he said. Each unit is available to rent on the Airbnb website. The customer then receives a code to get into the house.

Carolyn Ten Broeck, the executive director of the Williston Chamber of Commerce, says the resort was something the city desperately needed. With no overnight accommodations, it was hard for people to fully experience Williston, she said.

“It’s in the heart of our town, so it’s within walking distance of just about everything,” she said.

Sad Donkey Coffee shop employee Laura Nance says the resort is a good step in helping Williston grow. She said the city has been stagnant for the past few years, and there are very few businesses to bring people in.

Most people who live in Williston commute to work in Gainesville every day. Nance says there aren’t any hotels in the area. As a result, there are only a few places for people to rent to experience the city.

“There are things to do in Williston, but there’s nowhere to stay,” she said. “So, I think having a tiny house resort where people can come and stay will hopefully help to build the town.”

Kristin Gopichand, another barista at Sad Donkey Coffee, says Williston is struggling with being stuck in its old habits and ways. She adds this resort is something new that brings value to the city.

“We want to keep the small town, but improve it,” she said. “Give it a little spice and a little life.”

Crandell said the tiny houses will stay as short-term rentals. He adds that long-term tiny houses are not completely out of the question.

“The success we’ve had with the short-term rentals makes it difficult for us to decide to do long-term rentals, but it will definitely be something that we consider to do in the future,” he said.

Dena Battle, a resident of Williston for over 20 years, said the reality of tiny houses being long term in Williston would be a great opportunity for the city.

Battle said not many people leave the area after graduating high school. As a way to provide more affordable long-term housing options in the city, Tiny Resorts are perfect for those people as well as older people who are retiring.

“It gives great opportunity for retirees wanting to move to the area or first-time home buyers,” she said.

Crandell said he is excited about this resort in Williston and the future to come. He said the company is looking to expand in other places in Florida and the Southeast. Williston, however, will always remain a special place for this resort.

“We’re trying to make Williston a destination more than just a pass-through,” he said. “And I think there’s a lot of opportunity for that.”

Charlene is a reporter for WUFT News who can be reached by calling 352-392-6397 or emailing news@wuft.org.
Previous The Lede || Season III Episode I: COVID-19: Where Are We Now
Next UF Student Charged With Grand Theft From His Job At Walgreens