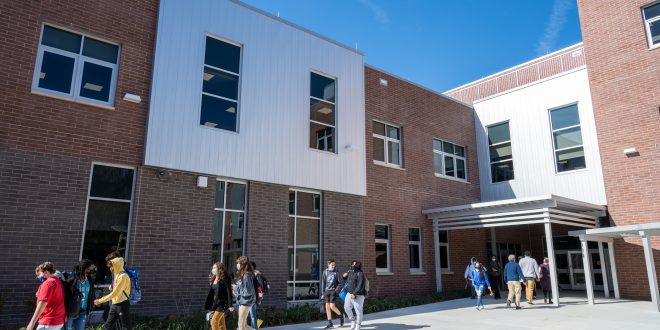 P.K. Yonge students are dismissed after their first full day of classes in the new facility on Wednesday. (Dylan Taylor/WUFT News)

The new building at the developmental research school has 73,500 square feet of floor space and was built by Parrish McCall Constructors LLC. The total cost of the facility is about $21 million.

The building will provide classrooms and labs for students in grades six through 12. These rooms come supplied with state of the art technology, such as lab equipment, flat-screen TVs and Apple TVs.

P.K. Yonge Principal Dr. Carrie Geiger said the new non-traditional facility is an attempt to push away from the “factory model” for education.

In addition to the new technologies provided, the building differs from traditional learning environments by removing hallways in favor of larger classrooms, and opening up spaces with large glass walls.

Phillip Miller, a P.K. Yonge senior, said the previous buildings felt very secluded with narrow hallways. He said his first day in the new building felt like, “…moving into a new house with an open-space concept.”

Geiger said the school’s mission with the new building is to figure out new ways to improve the traditional education system — then share their findings with other educators. She added that P.K. Yonge often invites educators from around the world as partners in their research.

“One thing about education, it’s really slow to change,” Geiger said. “When you look at what education looks like now and what it looked like, you know, 50 years ago, it hasn’t changed that much other than we now have some cool technology.”

Construction of the building lasted from Oct. 28, 2019, until Wednesday, but planning began long ago.

P.K. Yonge Director Dr. Lynda Hayes said the project has been under development since she began working at the school 10 years ago.

One of the primary hurdles to completion, Hayes said, was acquiring funding.

Although P.K. Yonge is a public school, its status as a developmental research school makes it a single-school school district. This means P.K. Yonge is not a part of the Alachua County school system and, therefore, does not receive county taxes.

The school was, however, able to pull in funding from state taxes and the school’s partnership with the University of Florida.

The completion of P.K. Yonge’s newest addition to campus also marked the end of Phase II of the school’s five-phase revitalization project.

Hayes said the revitalization project began in 2007 after the state gave the school permission to begin replacing old structures, rather than refurbishing or repairing them.

“Our old buildings were built in 1957,” Hayes said. “They were in tremendous disrepair and were not functional for today’s world.”

Dr. Geiger added: “Some of these old buildings, you can’t even buy the fixtures anymore to make repairs. …when we would have a toilet break or a sink break, we could not even find the parts to fix them. They’re just really outdated and they leave a huge carbon footprint.”

New projects are being built with energy conservation and environmental awareness in mind. The newest building was LEED certified.

The last project completed for the revitalization project was P.K. Yonge’s elementary building in 2012.

So far in the revitalization plan, P.K. Yonge has developed a new art wing, performing arts building, an elementary building and now a new secondary school.

All of the 1957 buildings have now been replaced with the exceptions of the gym and the cafeteria. The gym is next on the list.

Hayes said while some students and alumni are sad about replacing some of the historic buildings, “… it’s just such a grand and beautiful transition that people are quickly embracing it.”

Dylan is a reporter for WUFT News who can be reached by calling 352-392-6397 or emailing news@wuft.org.
Previous Fatal Crash On I-75 In Ocala Kills Two And Injures One
Next The Point, Jan. 21, 2021: Tunnels Under Miami? It’s A Costly But Not Crazy Idea, Experts Say