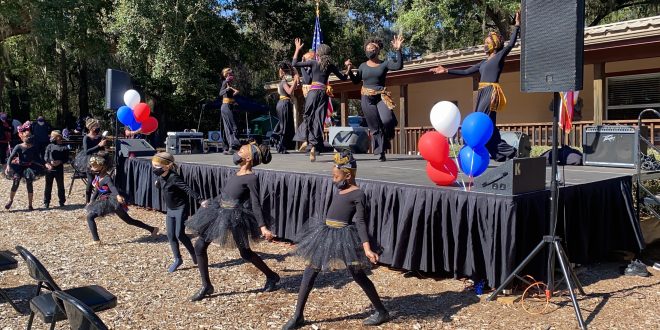 Dancers from Expressive Ministries of Song and Dance, ages 5 to 23, perform during the Martin Luther King Day celebration in Alachua City on Monday. (Kalia Richardson/WUFT News)

The U.S. Capitol insurrection was still on the minds of those at the Martin Luther King Day event on Monday at the Cleather Hathcock Sr. Community Center in Alachua.

State Rep. Yvonne Hinson, D-Gainesville, said President Donald Trump’s supporters reflected the ugly notion of white supremacy as they raided the Capitol. While praising activist Stacey Abrams’ movement that led to 800,000 new voters in Georgia, Hinson called on African Americans to fulfill King’s dream of equality for all by emancipating themselves through policy.

“A protest without policy is just a parade,” Hinson told about 60 people who attended the socially distant outdoor celebration.

E. Stanley Richardson, the Alachua County poet laureate, said that the insurrection has made many Black people fearful because of the ancestral trauma of white mobs.

“White nationalists and militia groups are on the rise,” Richardson said while noting that he once had a police encounter in Levy County that was too painful to recount publicly. “I feel unsafe, and I’m a 58-year-old Black man.”

The event began with Kiyana Williams, 17, a Santa Fe High School senior, singing the national anthem as her father, Ronnie Williams, 39, and sister Braelyn, 8, looked on. Ronnie Williams said in an interview that it hurt to watch the insurrection, and that it worried his family.

“I felt like I was in a Third World country,” Williams said. “You think you’re moving forward, and then next thing you know a curveball is being thrown.”

Saying that if he could travel back in time, “I would have walked with Dr. King,” Williams said he prioritizes his daughters’ safety and education as well as extending messages of unity.

“You reach one, you teach one,” he said. “If I can learn something new that I didn’t know, best believe I’m going to share it with someone else.”

The celebration focused on ending systemic racism and emphasizing the love and unity in a divided nation, said its artistic director, Carol Velasques Richardson, who is also chair of the Alachua County Arts Council, and Richardson’s wife.

At the event, Pedro Jermaine, vice president and resident artist of The Real Rosewood Foundation, showcased his artwork, which he said uses Black history to express messages of hope. His “My Power” painting depicted an ancient African queen wearing a shield of armor, gold bangles and a crown, with shades of blue to represent royalty and gold to symbolize power.

“I love taking these Black figures and exalting them,” Jermaine said.

In their “Baby Beauties and Boys Hair Show,” four girls ages 8 to 10 took to the stage to flaunt their curly styles and share quotes from King’s famous speeches.

One of them, Tamiyah Davis, 9, wearing a floral dress and a long braid adorned with silver clips, quoted from King’s “Where Do We Go From Here?”

“I have decided to stick with love. Hate is too much of a burden to bear.”

David Canton, director of the African American Studies Program at the University of Florida, served as the event’s keynoter. Canton bemoaned what he called the sanitized version of King – the bus boycotts and “the Dream” speech that he said people have been spoon-fed for decades.

In his “Radical King” speech, Canton focused on the civil rights leader who failed to desegregate Albany, Georgia, in 1962, and who had a 75% disapproval rating by 1968.

Canton also discussed issues like inadequate health care, and particularly how during the COVID-19 pandemic it has disproportionately affected marginalized communities.

“It must be deeper than Black folks with bad values and hip-hop and genes,” he said. “It’s a system.”

“These are not radical positions; these are positions that King would say are morally correct,” he said. “This country needs a structural transformation.”

Correction appended: An editor’s error in a previous version of this story contained an incorrect version of Stacey Abrams’ name.

Kalia is a reporter for WUFT News who can be reached by calling 352-392-6397 or emailing news@wuft.org.
Previous The Point, Jan. 15, 2021: Florida Law Allows Guns Inside Certain Parts Of Its State Capitol
Next The Point, Jan. 19, 2021: Alachua’s Celebration Of Martin Luther King Jr. Emphasizes Love And Unity In A Divided Nation

These are not artifacts, challenge those seeking their return. They are human beings with family members. It’s time to bring them home.