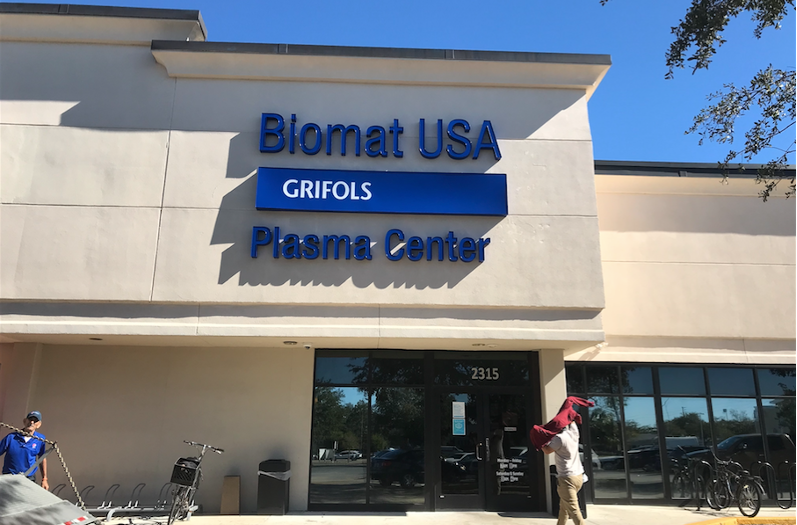 With a masked smile, Shawn Brown greeted the woman approaching the door.

“Are you coming in?”

She nodded as Brown propped open the door of Gainesville’s Grifols Biomat USA Plasma Center on 13th Street. The woman provided one of about 1,200 plasma samples the center received that week.

In the doorway, the first thing you encounter is a watermelon-sized container of hand sanitizer. A technician in a mask and lab coat squirts the disinfectant into your hand and takes your temperature with a contactless thermometer. If you are cool enough, you may proceed inside, where every employee sports personal protective equipment and glass shields divide public areas.

The company implemented these precautions to make sure the centers were safe spaces for donors. The plasma collection machines and accompanying chairs have been spread out to accommodate social distancing.

Apart from these safety protocols, the center has a relaxed feel. The walls are painted with earthy brown tones and decorated with art depicting trees and plants. You might think you’re at a spa.

Brown, 27, has worked for Grifols for over eight years and has managed the Biomat USA Gainesville center for the past two. As the parent company of Biomat USA and Interstate Blood Bank, Grifols receives plasma donations from 260 centers around the country. Brown said Grifols has been determined to produce life-saving plasma-derived medicine despite the challenges the industry faces due to the coronavirus.

The pandemic has, however, thrust plasma donation in the spotlight. The Food and Drug Administration is encouraging people with COVID-19 antibodies to donate plasma to help develop a treatment for the virus. Grifols recently launched a nationwide campaign to recruit donors and educate people on the importance of plasma.

The company announced in a statement that it is working on a drug that could potentially treat COVID-19. The medicine is undergoing clinical trials in collaboration with Biomedical Advanced Research and Development Authority, the National Institutes of Health and the Food and Drug Administration.

Plasma is mostly water, but it also contains therapeutic proteins and antibodies. It regenerates quickly. When a person donates, both plasma and blood are drawn, and then a machine separates the plasma out and returns the blood to the donor. It can take up to 1,300 donations to create a one-year supply of medicine for one person.

Inside the Gainesville center, people from all over the community come to donate. They carry their stories, afflictions and motivations with them as they sit back into the black reclining chairs. Then they expose the vein inside their elbows, ready for the needle to break skin.

“Thousands of people across the country donate every day from all different races, ages, genders,” said Vlasta Hakes, Grifols’ director of corporate affairs. “The donors really represent the communities the centers are in.”

According to Brown, students from the University of Florida and Santa Fe College make up a large portion of the donor base at the Gainesville center. Most of the other donors are local residents. Pandemic-induced interest in plasma donation has recently attracted many first-time donors, but he said some people have been coming to the center for over 20 years.

Many come to Grifols with mixed motivations.

Some give plasma because they see it as an opportunity to make a difference in the lives of people who need life-saving treatment for the coronavirus. Others are enticed by the prepaid Visa card they receive on the way out. Those experiencing economic hardship brought on by the pandemic have been coming to donate plasma for a few extra bucks.

On a November afternoon, Zodia Robbins, 30, reclined while a tube pumped the translucent yellowish plasma from her arm. She plainly articulated why she was there:

It was Robbins’ third time donating plasma. She seemed comfortable as she sat hooked up to the collection machine with a fuzzy teal blanket covering her legs. Across the aisle, her husband did not feel as calm. He sat bug-eyed, waiting with dread as the technician assembled the needle.

“This is my husband’s first time,” Robbins nodded over at him. “We have five kids, and we need money to buy them supplies for school, so I brought him along.”

Robbins formerly worked at a state hospital but is currently unemployed.

“Donors will come in for the money and because they want to help others,” Hakes said. “Both reasons are important to continue to grow the donor pool.”

Grifols compensates donors for their time and commitment to the donation process. First-time donors generally spend about two hours at the center. Every subsequent donation takes an hour.

Plasma with COVID-19 antibodies yields $100 per donation. People with these antibodies are paid more because there are extra steps to go through when donating. Qualified donors can give plasma up to twice a week with 48 hours between each donation.

“Why not?” asked Santa Fe College student James Babbitt. He donated three times in two weeks in November. He said the extra money will supplement what he earns as a BiteSquad delivery driver.

“I’m here for the money, but it’s nice to do something useful,” Babbitt said.

Babbitt said he’ll spend his check at the grocery store.

Savannah Gibson, 20, has donated plasma over 10 times since September. She tries to donate whenever she’s not studying for her cardiovascular sonography degree at Santa Fe College or working as a patient-care technician at North Florida Regional Hospital.

She has the COVID-19 antibodies, but she said her experience with the coronavirus only resulted in loss of taste and smell for a few days. Although her symptoms were mild, she knows that is not the case for everyone.

“I’m doing something good with my antibodies,” Gibson said. “You never know what someone might need.”

Over the last few months, donation numbers have been growing and are now almost at their pre-pandemic level.

According to Shawn Brown, nobody at Grifols has lost their job because of the pandemic, and for that they are all grateful. He said the employees at the Gainesville center are like a big family, and the Grifols’ corporate team has pushed a narrative of support and positivity from the beginning of the pandemic. Employees know fulfilling their roles is just as important as attracting donors right now. Over the years, Brown has come to understand how much people rely on plasma donations.

In his office at the center, he plucked a white heart-shaped sticker from the wall.  One side of the heart said: “I donated plasma today!” and on the other, a message written by an elderly woman in cursive: “Thank you for helping to save my life. —Shirley”

“You forget about the impact of what you’re doing, and then there’s something like this,”  Brown said.

Brown said he hopes to work in plasma for the rest of his life. He’s loved it since he first started his part-time job in plasma processing at 19, and he loves it now, even with the difficulties posed by the pandemic.

Then, he wheeled backward in his chair, and carefully returned the heart to its spot on the wall.

Molly is a reporter for WUFT News who can be reached by calling 352-392-6397 or emailing news@wuft.org.
Previous The Point, Jan. 7, 2021: ‘A Dark Day In The History Of Our Nation’
Next North Florida Museums Interact With Public Despite COVID-19 Challenges

From 8 a.m. to 4 p.m. on weekdays, Lindsey Jones oversees the funding of University …