59-year-old Democratic candidate Mary Alford and 40-year-old Republican candidate Raemi Eagle-Glenn are running for the Alachua County Commission’s District 1 seat. Here is what voters need to know about them as they prepare for Election Day on Nov. 3.

She is an environmental engineer who has been involved with local government for 10 years. She has served on the Alachua County Environmental Protection Board, Gainesville Code Enforcement Board and Gainesville Utility Advisory Board.

Alford said she got involved in politics after her son, Joseph Williamson, died of leukemia at 25 on Dec. 11, 2009. She said he had been struggling with headaches for weeks before finally going to the doctor and getting diagnosed.

“He waited because he did not have insurance,” Alford said. “There is a chance he might not have died if he had insurance and gone to the doctor when he should have.”

If Alford wins, she will be the first open lesbian on the commission.

Eagle-Glenn moved to Gainesville with her husband in 2008 to attend law school at the University of Florida. She has since graduated and practiced law at her own local firm, Eagle-Glenn Law, since 2013. She said she primarily practices contract and business-related law but also practices civil rights law.

Her former client, Samuel Reyes, was one of hundreds of people who received clemency from former President Barack Obama in August 2016. Reyes had pleaded guilty to drug trafficking charges in 2003. Eagle-Glenn had begun working with Reyes in March 2015, according to court documents.

On May 11, she filed a civil rights complaint on behalf of five clients against the Alachua County Board of County Commissioners centered around the mask requirement in its emergency order. The commission’s order requires masks to be worn indoors and in situations where social distancing is impossible.

Eagle-Glenn said she decided to run after Northern Florida’s U.S. District Court denied her motion to halt the enforcement of the emergency order’s mask requirement. She said she could have appealed the decision to a higher court, but decided the process would have taken too long with her clients. Now, she said she hopes to change the commission’s order while serving it.

“I decided to take the battle to the ballot box,” Eagle-Glenn said.

If elected, Alford said she would continue to support the county’s mask and social distancing requirements.

Alford said she was frustrated with the state government’s response to the COVID-19 pandemic, especially how Gov. Ron DeSantis allowed businesses to operate at full capacity by Sept. 25. The governor also prohibited local governments from collecting fines for local mask or social distancing order violations. Alachua County’s emergency order allows code enforcers to issue citations to people for mask violations, but the county can no longer collect fines associated with those citations.

To Alford, the economic benefits of reopening businesses will be handicapped by the absence of statewide social distancing and masking requirements.

“Our economy doesn’t come back just because we say stores are open,” Alford said. “Our economy comes back when people feel safe to go in those stores.”

She also said she would encourage the University of Florida to punish students who do not wear masks or social distance off campus.

Eagle-Glenn said she feels the county should not enact measures beyond DeSantis’ order. While she said she understood larger counties, like Miami-Dade, would want to implement harsher COVID-19 restrictions because of its population size, to her, Alachua County is too small for harder restrictions to be required.

“Gainesville is really a small town,” Eagle-Glenn said. “I don’t see that there needs to be measures above and beyond what is good enough for the rest of the state.”

Alford said her experience as an environmental engineer has made combating climate change a top priority to her, but not her only one. To her, issues like the economy and equity need to be considered when dealing with environmental issues.

“You can build the greenest house in the world, but if no one can afford to buy it, it doesn’t help anything,” Alford said.

To her, equity concerns towards historically Black areas of the county have not been properly addressed in some of the Alachua County Commission’s recent decisions. She highlighted its decision to expand a landfill in East Gainesville in June 2019 as one she found inequitable.

East Gainesville is home to two of the oldest historically Black communities in the state. Alford said the expansion of the landfill decreased property value in the communities.

“Now when they walk out their door there is this looming landfill,” Alford said.

Eagle-Glenn applauded the democrat-controlled commission’s conservation efforts over the last two decades, but said she disagreed with some of its methods.

She said she opposed land purchases by the county to preserve land. Instead, she said she wants to encourage conservation efforts by private developers by requiring they set aside portions of land on each property they develop.

The county has purchased land for conservation through Wild Spaces and Public Places, a program funded by a 0.5% sales tax. The program was directly approved by Alachua County residents in the 2016 election, with 60.47% of voters supporting the program, according to Alachua County Clerk of Court records.

According to the Florida Municipal Electrical Association, Gainesville residents regularly have the highest electrical utility cost in the state. However, GRU is owned by Gainesville, and the Alachua County Commission has no jurisdiction over GRU to influence Gainesville utility prices.

Alford said she recognizes racial injustice is a problem in the United States.

“I fully support the Black Lives Matter movement,” Alford said. “It has been a long time coming.”

Alford’s family would have directly benefited from having mental health professionals play a bigger role in emergency response. She said one of her sons has schizophrenia.

“One time, he was arrested when his illness was out of control and ended up in jail,” Alford said. “It’s not fair, to be perfectly honest.”

Eagle-Glenn did not say whether she does or doesn’t support the Black Lives Matter movement. However, she did say she understands that the impacts of racial injustice still affects communities in the country today through her experience as a civil rights attorney.

She said she supports law enforcement and wants them to play a bigger role in their communities.

“Because Black lives do matter, we need to have community policing partners,” Eagle-Glenn said. “We need to look at law enforcement as people that can be there to serve and protect.”

Eagle-Glenn also denounced all violence that has occurred in the same locations of BLM demonstrations nationwide.  She specifically cited the death of   an 8-year-old who was shot in Atlanta on July 4.

What To Expect In This Race

Over the past 20 years, the democratic party has controlled this commission seat. During that time, the democratic candidate won 55.48% of all votes in years he or she ran against a republican opponent, according to Alachua Supervisor of Election records. In 2004 and 2016, there was no Republican candidate. 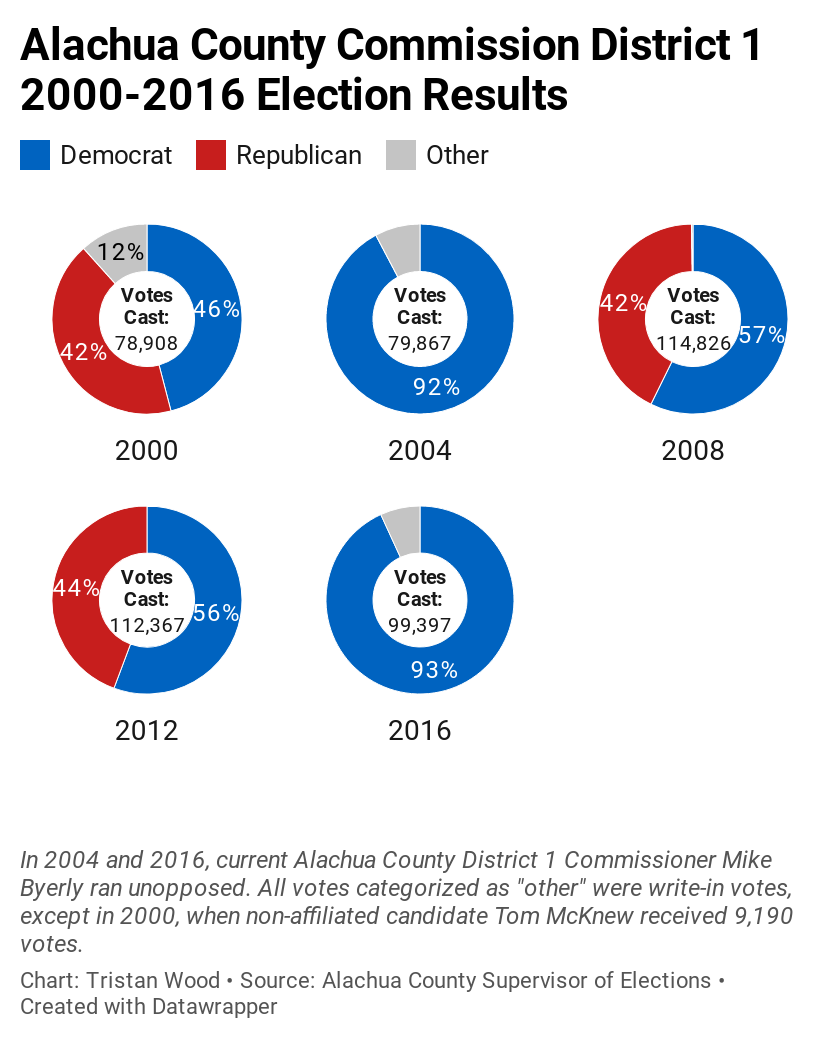 “We as Republicans are basically riding the Trump campaign coattails,” Eagle-Glenn said.

“Local issues you see as a commissioner are about making good decisions for the future of your county,” Alford said.

Regardless of past results or current trends, Alford and Eagle-Glenn’s race will be decided on Election Day.

Tristan is a reporter for WUFT News who can be reached by emailing news@wuft.org.
Previous ‘Need To Be A Little More Cautious’: Students And Medical Professionals Weigh In On COVID-19’s Impact On Young People
Next Alachua County Commission Discusses COVID-19 Emergency Orders