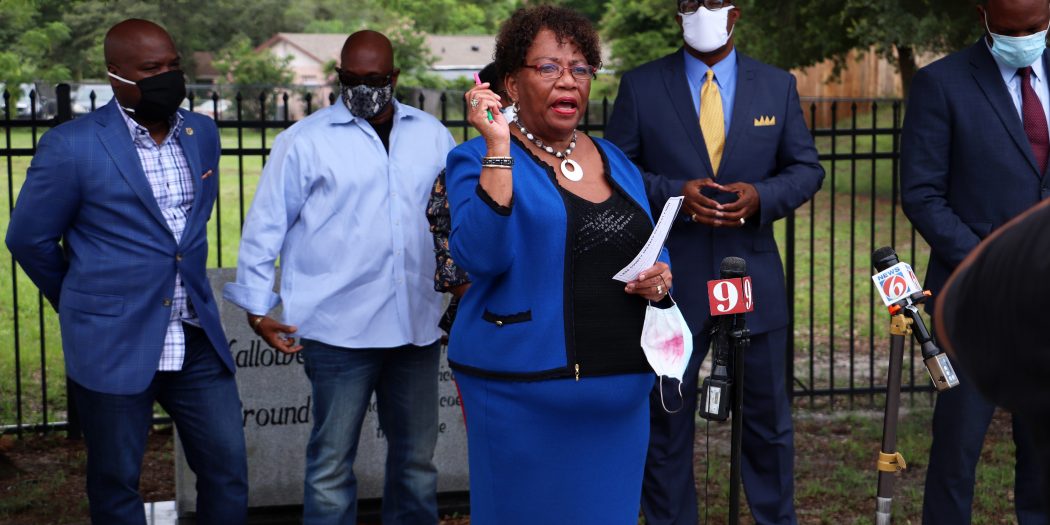 Rep. Geraldine Thompson, center, addresses the crowd during a press conference announcing a road designation in honor of Julius "July" Perry at the Ocoee Massacre Memorial on Wednesday, July 8, 2020. In September, the Florida legislature passed a bill mandating the teaching of the massacre in schools as an initiative to strengthen Black history curriculum. (Lauren Witte/Fresh Take Florida)

COCOA BEACH, Fla. – Florida is requiring that all public schools describe for the Department of Education how they intend to teach new classroom lessons on Black and Hispanic history and the Holocaust. At least three school districts failed to submit their mandatory curriculum reports on time.

Talk about turning in a late homework assignment: Florida’s school districts have known about the July 1 deadline for nearly a year, when the department ordered the reports.

The new mandate comes amid a national reckoning of heightened sensitivities toward race and ethnicity after this summer’s Black Lives Matter protests stemming from the death of George Floyd in Minneapolis during an arrest.

Separately, Republican Gov. Ron DeSantis last month signed a new law directing schools to explore ways to teach children about the 1920 Ocoee Election Day massacre, when dozens of African-Americans died during a mob massacre near Orlando. The violence ignited in that small town after a Black man tried to vote, enraging Southern sensibilities.

The new education rules were intended to ensure that students across Florida – from its urban, largely liberal southern counties to the conservative Panhandle in the north – consistently learn about Black history, Hispanic history, the Holocaust and American civics.

Franklin and Glades County school districts said they were given a 20-day extension, but spokeswoman Cheryl Etters said the Education Department granted no extensions.

According to Florida statutes, districts that do not comply with the mandate could lose funding.

For example, the study of Black history in schools in Hillsborough County, where Tampa is located, begins before the trans-Atlantic slave trade with the history of Africa. But its curriculum for lower grades, from kindergarten through 5th grade, lacks details with broad course descriptions and references to only two instructional materials.

In Jacksonville, the vice president of Duval Teachers United, the teachers union, said the curriculum plans for her county’s elementary schools lacked specifics. The report mentions lessons in third- and fourth-grades but doesn’t go into depth. She said schools there were inconsistent teaching Black history.

Black history should not be separated from American history, George said. Prominent Black figures in history should be taught in-depth in the normal curriculum and not during a set-aside month, she said.

At home, George taught her own children about Harriet Tubman and other prominent Black figures in American history. She said her children’s education was otherwise so incomplete it was “scary.”

The lack of standard classroom lessons about dates and issues important in Black history was illustrated when so many Americans – including President Donald Trump – acknowledged they were unaware of the significance of Juneteenth, the June 19 holiday commemorating when slaves in Texas learned they were emancipated. Trump hastily rescheduled a campaign rally he had originally planned for that day in Tulsa, the site of a deadly massacre of hundreds of Black residents in 1921.

“Nobody had ever heard of it,” Trump said of Juneteenth.

In Orlando, the senior director of curriculum and instruction for Orange County Schools, James Russo, said the district has never had an explicit standard to teach about the Ocoee massacre despite the event happening so closely nearby, in the same county.

“If it’s a topic that’s being avoided or was avoided, sometimes we don’t feel like we’re prepared to share it in the most appropriate way,” Russo said. “That’s part of our job is to look at where these pieces would fit in.”

Orange County is evaluating where the Ocoee massacre is developmentally appropriate to teach in their curriculums, he said.

The head of the county’s NAACP chapter, Beverlye Neal, said the massacre should have already been taught in schools before the new law.

“History doesn’t always have to be national or statewide,” she said.

Kimberly Garton, the social studies content specialist responsible for history curriculums in Brevard County, said the African American history elective is offered only at Heritage and Cocoa High School, but the district plans to expand it to more schools soon.

“We really do think that it’s an elective that a lot of our students would be interested in, as well as it would help really round out some of our social studies curriculum,” Garton said.

The elective goes into more depth than the state-standards history courses, she said. Because the course is more focused, teachers can teach at length about prominent Black figures in American history outside of the normal state-standard history curriculum.

Garton said Brevard county does not require teaching of current events, such as the death of George Floyd. However, she does encourage the county’s instructors to talk to students about them.

This story was produced by Fresh Take Florida, a news service of the University of Florida College of Journalism and Communications. The reporter can be reached at swalker@freshtakeflorida.com

@swalker_7
Previous The Point, July 17, 2020: The RNC In Jacksonville Is Going To Look Different This Year
Next Alachua County School Board Pushes 2020 Start Date To Aug. 24