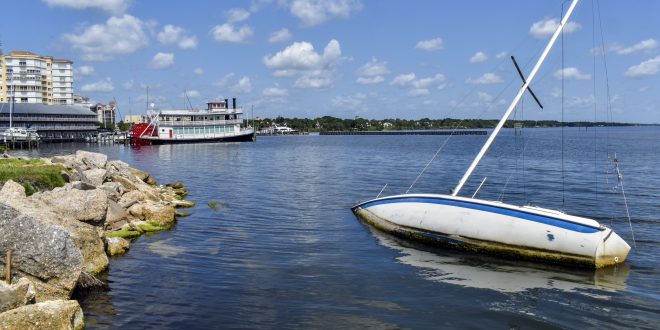 For Poor In America, Sanitary Sewage Disposal Can Be A Challenge

Two new environmental laws in Florida signed this week include efforts to improve septic systems and increased fines for sewer overflows and other related violations. But for low-income communities across the country, sanitary sewage disposal isn’t always accessible and can be costly.

Catherine Flowers, founder of the Center for Rural Enterprise and Environmental Justice and rural development manager for the nonprofit Equal Justice Initiative, grew up in Lowndes County, Alabama, where raw sewage pooled in the yard or even her house from occasional backups.

Part of the so-called Black Belt, residents of Lowndes County have been victims of hookworm, a disease of poverty long thought to be eradicated in the U.S., according to the results of a peer-reviewed 2017 study that the Alabama Department of Public Health later said was inaccurate.

“Coronavirus (is) exposing just how fragile our public health system is,” Flowers said. “We’re also exposing how fragile our sanitation laws are and how we really don’t have all the solutions.”

The Clean Waterways Act, which Florida Gov. Ron DeSantis signed Tuesday, moves oversight of septic systems from Florida’s Department of Health to its Department of Environmental Protection. The new law is expected to increase funding to replace damaged and hazardous septic tanks.

“We need to address the environmental impact of septic tanks, and this bill puts us on a path to do so,” DeSantis said at a press conference in Juno Beach.

In one home, after heavy rain, she said leaking sewage came up under the house’s kitchen, causing mold that created habitat for spiders that bit and hospitalized her and her son. They were evicted, and she said the landlord didn’t want to pay for maintaining the septic tank.

“If you try to tell a landlord, ‘I won’t pay you rent if you don’t fix this,’ they don’t care,” Arocho said. She lived with her son, daughter-in-law, daughter, her boyfriend and four grandchildren.

In another home, sewage backed up into the toilet and bathtub for three days, she said, before someone came to fix it. She said the smell was unbearable.

“You can’t move if you don’t have the finances to move,” she said. “So you’re stuck there.”

They now live in a different home and no longer suffer from related health issues, Arocho said.

Dr. Michelle Kirwan, their pediatrician at the Center for Family and Child Enrichment, a federally qualified health center in Miami Gardens, said Arocho’s family also complained of feeling lethargic and falling asleep around the same time they had sewage and mold problems.

“There seemed to be something toxic in the environment that she attributed to them just kind of passing out,” Kirwan said. “My concern is, what is piling up in their house?”

Many of her patients live in poor neighborhoods that aren’t kept as clean as wealthier areas, she said.

“When I look at these underserved communities,” she said, “I see that the deck can be stacked against them.”

“As we transition, this might be helpful because that homeowner that would have to write a check to an individual contractor might be able to get the funding,” said Roxanne Groover, executive director of the Florida Onsite Wastewater Association, a Winter Haven-based trade group for the septic industry.

DeSantis approved the state budget earlier this week, including $2.2 billion for the Department of Environmental Protection, an increase of more than $230 million over last year. The governor vetoed more than $1 billion in spending due to the economic crisis caused by the virus shutdown, cutting funding to dozens of projects for local wastewater and sewage treatment.

“These penalties will serve as a deterrent against bad actors,” DeSantis said in a tweet.

Septic systems and sewer lines include costs for renters or homeowners, said Rachel Silverstein, executive director of the Miami Waterkeeper organization, which advocates for water protections. Septic-to-sewer projects connect communities to the sewer line, creating a monthly sewer bill. Separately, poor families may be unable to pay for septic maintenance, since tanks need to be routinely pumped every few years.

Florida’s booming population means that, whether homes use septic systems or sewer lines, high concentrations of people could result in viruses or bacteria from sewage contaminating the state’s water if not adequately treated, or from sewage spills. Official estimates project an annual increase of more than 300,000 people in Florida for the next four years.

As long as septic systems work properly, they are safe, said Mary Lusk, a soils researcher at the University of Florida. But if they are not functioning properly and are backing up into the yard or home, she said she would be very concerned about any drinking water sourced from nearby wells.

Marlowe is a reporter for WUFT News who can be reached by calling 352-392-6397 or emailing news@wuft.org.
Previous Legal Woes Mount For Owner Of Popular Tourist Restaurant Under Tax Investigation
Next Is Florida Moving Backward In Its Fight Against COVID-19?