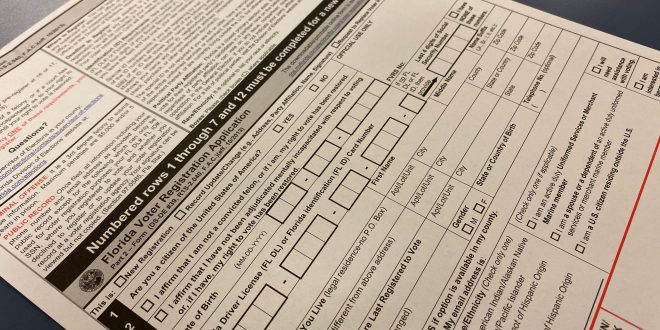 Tuesday is the deadline to register with a party or update voter registration to vote in Florida’s March 17 presidential primary. Because of the closed-primary system, only voters registered with a party can cast a ballot. (April Rubin/WUFT News)

Voter Registration Deadline Nears, With Many Floridians Not Allowed To Vote In Primary

Lauren DiFiore made sure to register to vote before the deadline to do so Tuesday for the upcoming presidential primary in Florida.

“It’s really important for people our age to be involved,” said DiFiore, 19, a sophomore majoring in health education and behavior at the University of Florida.

But DiFiore won’t get to cast a ballot for a presidential candidate on March 17. Not because she doesn’t want to. The state’s closed primary system means only those registered as either Democrats or Republicans can vote for someone to be their political party’s nominee.

DiFiore said registering with a party is restricting. She doesn’t strongly relate to Democrats or Republicans – a trait she said is representative of older generations.

She is not alone. Continuing a trend in presidential and congressional midterm elections, more people are registering as independents, said T.J. Pyche, outreach director for the Alachua County Supervisor of Elections Office.

Of the 250,483 registered voters in Marion County this year, 23% are not registered as Democrats or Republicans. It’s 16% in Bradford County and 20% in Levy and Putnam Counties.

Citizens can register online at vote.gov, at their local DMV or Supervisor of Elections Office, or with people canvassing on a college or high school campus or any other public place.

Dan Smith, a UF political science professor who researches voter behavior, said young voters and people not strongly aligned on either side of the political spectrum – liberal versus conservative – are the most likely to register without a party affiliation.

About 1,000 people move to Florida every day, and those who come from states with open primary systems often don’t know about the system here until they can’t vote, Smith said.

“They may not know that they’re effectively disenfranchising themselves and not giving themselves a voice in the very important primary contest,” the professor said.

David Sterling Carmen, 64, moved a year and a half ago to Gainesville from Michigan, which has an open primary system. He said he has been a Democrat, a Republican and, most recently, an independent – but registered as a Democrat at the Alachua County elections office Friday.

Carmen said he registered without a party affiliation when he moved to Gainesville because he felt he would get more objective political ads. But as he has continued to see the local and national landscape play out, he wanted to have a say in the primary.

“We’re in a time of political gamesmanship and it turns me off,” Carmen said.

Isabella Perez, 18, a UF freshman majoring in music, said she is anxious about voting in her first election. She knows Florida will be a crucial state for Democratic presidential candidates as well as a battleground one for the one who takes on President Donald Trump in the general election.

Perez registered as a Democrat, because she wants to vote for a candidate who supports LGBTQ equality, climate change, education access and health care.

“I want to make sure that we have the best possible chance of the issues that are important to me being represented by the candidate who is selected,” she said.

Sean Tonnelier, 58, a registered Democrat, went to the supervisor of elections office Friday to update his address and ask about his changing party affiliation to independent. Tonnelier said he is a descendant of Nathaniel Foote, one of the earliest immigrants from England to America, and who is said to have taken part in the first public elections on this continent in the 1600s.

Tonnelier wants to vote in the primary, but said no candidates appeal to him. The vice president of the Gainesville Sons of the American Revolution said he agrees with Democrats on education access and debt forgiveness, but Republicans on immigration policies.

“I think that our candidates need to be for all Americans and all the interests that we have instead of following their own agendas,” he said.

Sam Coodley, the statewide voting rights organizer for the ACLU Foundation of Florida, said it is important to register with a party not only to vote in a presidential primary, but also local ones, too. Coodley said voters should make educated decisions every time they cast a ballot.

The organizer noted, for example, that state attorneys decide which criminal justice reforms to follow, elections supervisors determine if postage is paid on vote-by-mail forms, and county sheriffs say which U.S. Immigration and Customs Enforcement mandates will be enforced.

“There will be a substantial difference in the primary and general when it comes to who is going to stand up for our civil rights and civil liberties,” Coodley said.

After not voting in the 2016 election, Clarissa Wiser, 28, who is earning a master’s degree in management at UF, said she wanted to do better. Wiser, who recently moved to Gainesville from the Panhandle, registered as a Republican on Wednesday.

Gun violence is one of the issues this election that she is most passionate about.

“I don’t necessarily agree with all of what’s happening on that side, but I still want to be educated in what I am voting for and make a decision based on those beliefs,” Wiser said.

Christopher Brown, field coordinator for Spread the Vote Florida, works in voter registration and helps people get government IDs. He said he has no party affiliation and closed primaries are not democratic in a country in which so many people fought for the right to vote.

“We don’t not only vote for ourselves,” Brown said. “We vote for our friends, neighbors and kids. So it’s not a selfish thing – it’s a community thing.”

April is a reporter for WUFT News who can be reached by calling 352-392-6397 or emailing news@wuft.org.
Previous University Of Florida To Professors: Stop Ordering Sick Students To Be Tested For Coronavirus
Next Alachua County Woman Traces Family History to Slavery