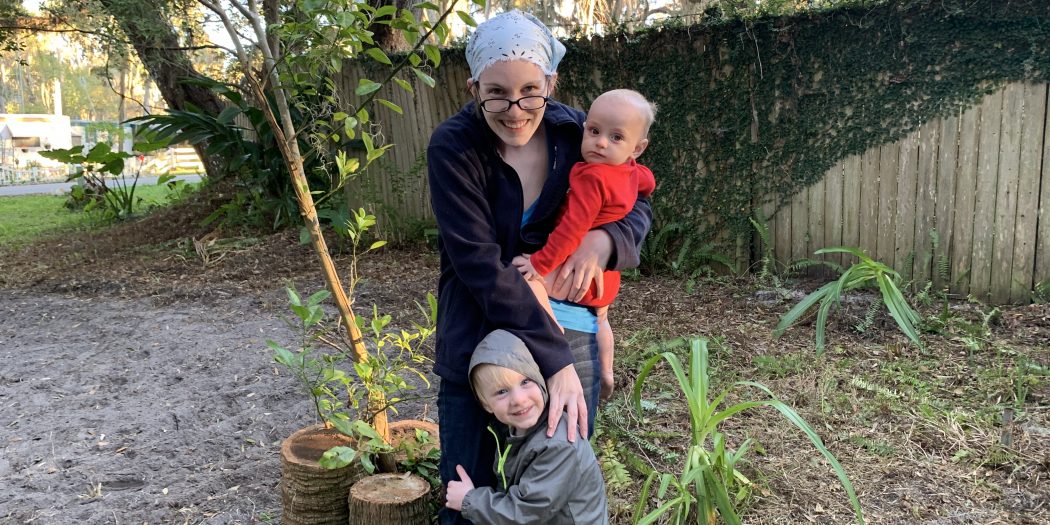 April Casey and her two sons, Logan Gonce, 1, and Damien Gonce, 3, pose next to their Loquat tree at the site of their community garden in McIntosh, Florida. (Cayela Cuevas/WUFT News)

McIntosh Woman Aims To Start Community Garden In Food Desert, With Hopes Of Children Getting Involved

Gently rocking her 1-year-old on her hip and peeking over a baby gate to check on her 3-year-old watching TV, her eyes start to light up when talking about her love for gardening.

April Casey’s been gardening for as long as she can remember. From planting herb gardens to tending to blueberry bushes, her goal has always been the same.

“I just want to keep everything alive,” she said, laughing while hearing herself.

For nearly 30 years, a lot of land diagonal from her home in Sportsman’s Cove 55+ Mobile Home Park in McIntosh lay empty with no promise of development in the near future. Her passion for gardening and desire to have easier access to fresh fruits and vegetables pointed to one answer: starting a community garden.

Since she moved from Massachusetts in 2015, Casey has looked out of her kitchen window at the lot wondering how much longer it would remain vacant.

Holger Gese, 47, manager of Sportsman’s Cove recalled the day earlier this month when Casey  asked her about starting a community garden in the empty lot.

The freshly tilled land that once was the vacant lot is ready to be poked and prodded with seedlings, which Casey hopes will happen soon  with help from her community.

A day after breaking ground on the community garden, she discovered tiny cat paw prints in the soil from the presumably 15 cats in the area. Her orange tabby cat Skittles is likely a contributor to the paw prints in the garden-turned-sandbox.

The only factor holding Casey back so far is this year’s intense cold front that brought lows in the 20s – and a lack of help from people in her community. Although her post announcing McIntosh’s new community garden in the “Micanopy Matters” Facebook group was well-received, no one has actually shown up to help, she said.

In an area where the closest Publix or Winn-Dixie is a 20-to-30-minute drive, Casey is one of the approximately 11.5 million people in the United States who live in low-income areas more than 10 miles from a supermarket, as found by the U.S. Department of Agriculture Economic Research Service.

The first product of McIntosh’s community garden is Casey’s loquat tree, which she describes as a cross between a lemon and a kumquat.

Its small but mighty branches  bear a few tangerine-colored fruits the size of a key lime. Her son Damien, 3, picks one up off the ground and gently places it onto a palm tree stump.

It’s important to Casey that kids have the opportunity to learn how to garden. Not only does it give them something else to do aside from hanging around the neighborhood, but it could help change the way they view eating, she said.

Clem agrees, citing that kids who have access to a community garden are likelier to be excited about eating their fruits and veggies.

Kids love French fries and mashed potatoes, so why not get them interested in gardening potatoes?

“Potatoes are basically the gateway veggie to get kids interested in growing their own food,” Clem said.

While Logan, 1, munches on cheerios and Monterey jack cheese, Casey expresses her desire to start the garden by growing ground vegetables such as squash and eggplant.

She hopes to move on to planting leafier veggies like kale and collard greens, tomatoes and even bananas.

All she needs to succeed, she said, is a little help from her community.

“I’d love to see the community come together and create something beautiful and educational for future generations.”

If you’d like to assist April Casey in her mission to create a community Garden in McIntosh, please text her or dial and leave a voicemail at (413) 221-1916.