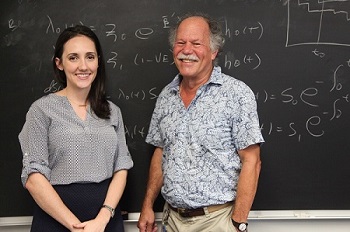 Natalie Dean and Ira Longini began working with the World Health Organization in 2014 on the Ebola research. (Photo courtesy of Ira Longini.)

Ebola Vaccine Licensure Is Underway With The Help Of UF Researchers

The first-ever Ebola vaccine is now closer to licensing, thanks to the help of two University of Florida researchers. Once licensed, the vaccine will become more accessible to those who are most at risk, having the potential to save thousands of lives.

University of Florida Professor Ira Longini and Assistant professor Natalie Dean collaborated with the World Health Organization to develop and test the Ebola vaccine. Longini and Dean were two of three Americans who assisted on the project, among 29 other researchers from across the world, predominantly Europe. They started working with the World Health Organization’s Strategic Advisory Group of experts in 2014 to finalize the trial protocol and start the vaccine trials. The trials started right in the midst of the West African Ebola outbreak of 2014-2016. According to the study’s findings, the vaccine was nearly 100 percent effective at preventing the Ebola virus when given 10 or more days before exposure.

“The results were very exciting,” Longini said. “It’s pretty much unprecedented to conduct a vaccine trial and develop it through phase 1 to phase 3 testing and come up with a successful evaluation about a highly efficacious vaccine during a very horrible outbreak.”

Since the trial, a new Ebola outbreak has emerged in Central Africa ⁠— the second deadliest outbreak in the region this decade. This new outbreak has infected more than 3,000 people in Africa and killed over 2,000, according to reports from the World Health Organization.

Longini, who specializes in vaccine research, has helped analyze the use of the vaccine as it continues through its licensure process. According to Longini, nearly 250,000 people have been vaccinated during the current outbreak in the Democratic Republic of Congo.

“In its current stage, we’re evaluating the implementation of the ring vaccination strategy, doing statistics work and some mathematical modeling to determine if controlled strategies might be the best,” Longini said. “It’s really a continuation of the trial itself.”

Even though the vaccine is not officially licensed, through the WHO’s sponsorship and written consent from the patient, the vaccine is being made available for those at risk of contracting the disease.

“Vaccinations and therapeutics are really the only way to control Ebola, as well as other emerging infectious diseases, so not only is the work we’ve been doing important for Ebola, but it’s important for many other emerging threats we’re dealing with like Pneumonic plague, Chikungunya , Pandemic Influenza – there’s a long list,” Longini said.

The American pharmaceutical company that manufactures the vaccine, Merck Sharpe and Dohme, has announced that the vaccine will be called Ervebo. On Oct. 17, the European Medicines Agency gave Ervebo conditional marketing authorization. The U.S. Food and Drug Administration has yet to come to a decision on the vaccine, but a conclusion on its licensure is expected by March 14, 2020.

“This should make Ebola prevention and control even more effective than it is now and save even more lives,” Longini said.

According to Jill Pease, Communications Director at the University of Florida College of Public Health and Health Professions, the UF researchers were instrumental in the process of designing the trial that tested the Ebola vaccine in the field and played a key role in the analysis of the data.

Since the project’s headquarters were in Switzerland and the field-sites like the Democratic Republic of Congo and Guinea are French-speaking countries, all of the work was officially done in French and had to be translated.

“In my role as a statistician, most of my work was just numbers,” Dean said. “I took French in high school, so I wasn’t completely lost,” she laughed. “In other roles though, it definitely was a challenge for those who didn’t speak French.”

But according to Dean, the language barrier was not the biggest challenge of the project.

“Places like the Democratic Republic of Congo experience a lot of violence and it is incredibly hard to be able to get the vaccine out to people when there has been an attack of some sort,” Dean said. “When someone is hurt, they don’t come to the Ebola Treatment Center for their vaccine.”

According to Longini, storing the vaccine was an issue in itself.

“The vaccine had to be kept at negative 70 degrees Celsius at all times,” Longini said. “We used containers developed by the Gates Foundation to keep the vaccine at such cold temperatures for weeks on end without any electricity. It was very difficult to pull that off in a field in rural Africa.”

Longini and Dean primarily worked with developing the trial strategy and analyzing the trial’s results – all the way from conception to design.

Based on some of Longini’s past experience, they decided to use a ring vaccine trial strategy.

When cases of Ebola popped up, project staff would get lists of people the patient has frequent direct contact with to vaccinate them and prevent the virus from spreading.

“The reason our trials and vaccination were successful was because we tested it through ring vaccination,” Dean said. “The trial was going on at the same time of the last major outbreak, so as the outbreaks moved, we moved with it and tested in those areas. It’s a flexible strategy because you don’t know who’s going to be at risk for Ebola.”

After determining the success of the trial, the group then had to submit the findings and vaccine to the FDA and the EMA, which are now awaiting official approval.

“We now have learned how to design vaccine trials for important infectious disease threats, like Ebola, in a way that we can assess vaccine efficacy, apply for licensure and devise control strategies all within one study design,” said Longini.

While the project was a learning experience for Longini and Dean, Longini said the best part of the work was knowing how many lives were saved and would be saved with this effort.

“[The most fulfilling moment was] when we went back to Guinea after the outbreak to commemorate the epidemic and pay homage to the dead and evaluate what we had done so well,” Longini said. “It was very surreal.”

Carolina Watlington is a general assignment reporter for WUFT. You can contact her at (561)-693-8751 or linawatlington@gmail.com.
Previous Nov. 18, 2019: Morning News In 90
Next DeSantis Proposes $91.4 Billion Budget

“People Are Under Pressure”: Depression, Mental Illness Increase During Pandemic

Richard Corcoran Spars With Florida Board Of Education Member Over Teachers Unions, Data

Curaleaf Medical Marijuana dispensary prepares for release of edible marijuana products in October, which they say will benefit more patients in need of medicinal support.