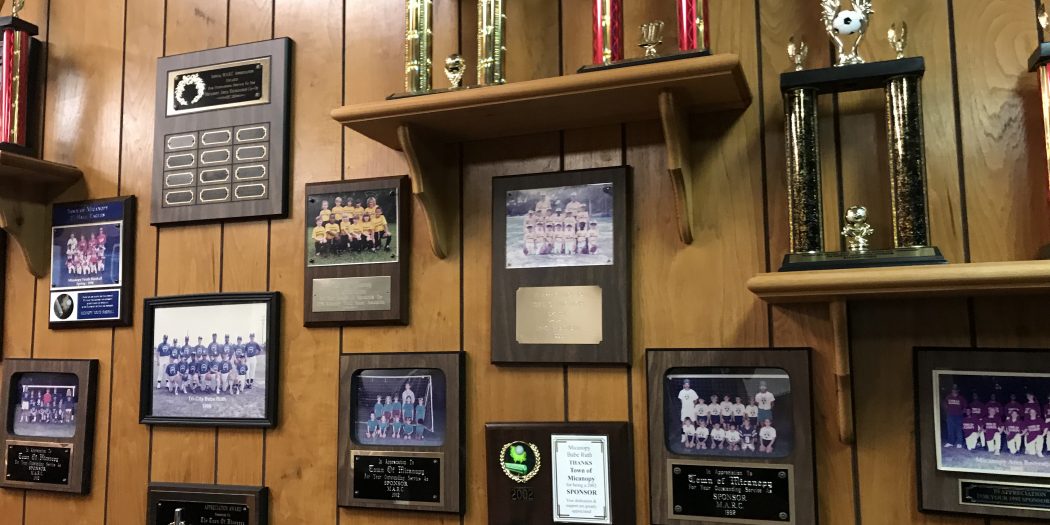 With $34,000, Micanopy Hopes To Revive Its Dormant Sports Programs

Engraved plaques and trophies from the 1980s and 1990s line the walls inside the Micanopy Town Hall, each with a cursive “Thank you” to the town for its support of local sports programs. The commemorative frames of little league teams stop abruptly in the early 2000s, a reminder that the town’s greatest pastime for children has ceased to exist.

The Micanopy Town Hall recently allocated an estimated $34,000 for field upgrades at the Carson Roberts Sports Complex. The funding comes from Alachua County’s previous iteration of the Wild Spaces and Public Places sales tax initiative and has sat untouched since 2008, according to Micanopy town administrator Debbie Gonano.

The unused baseball park is lucky to have residents visit more than twice a year.

They live only five minutes from the Carson Roberts Sports Complex in Micanopy.

Hoover’s commute is not unusual. Other parents take their children to Citra or Gainesville to play sports. At its peak, Micanopy ran eight or nine organized sports programs. Now, there are zero.

About eight or nine years ago, the commission decided to end organized sports because there weren’t enough people living in the town anymore to use the field, said Micanopy Commissioner Mike Roberts. In 2010, the U.S. Census recorded about 600 residents in Micanopy. It estimated 641 people for the 2018 population.

Ludovici remembers a time when every afternoon, people from neighboring small towns piled onto the fields. The town’s local sports programs helped raise her and most of her friends, Ludovici said.

Roberts echoes that sentiment. The ballpark is named after his late father, Carson Roberts, who held a stake in the local athletic club in the 1930s and 1940s. His dad was the last surviving member of the organization and in 1989 gave his property rights to the park over to the town.

Roberts said he’s tried several times to bring back athletic programs, but past town commissions decided not to move forward with his proposals. He credits these decisions to a low population and high expenses.

“If we can get parents who are willing to put some skin into the game ⁠— pay for their kids to play ⁠— that’s what we’re looking for,” Roberts said. “We can’t foot the bill ourselves.”

During a town hall meeting on Oct. 7, the commissioners approved Robert’s proposal to replace the ballpark’s roofing, including the roof over five dugouts, two score booths and one concession stand, for an estimated $34,000.

“With the Wild Spaces money that we have, at this point, we can’t spend it fast enough,” said the mayor of Micanopy, Joe Aufmuth, at the meeting.

“It’s burning our pockets,” Micanopy resident Homer Jack Moore said. “As a taxpayer, I’m going to have to object to that kind of attitude.”

Gonano said the other nine municipalities spent their varying portions of the 2008 Wild Spaces and Public Places initiative. The committee that decides the usage for the funding has since disbanded, and “they want us to spend the money,” Gonano said.

“The commission is very responsible and (has) been waiting for the right project,” Gonano said at the meeting. “People have been clamoring for the money to be spent.”

Roberts said that although no one is playing in the field, the town needs to maintain the area. He hopes the new roofing will encourage more people to come there.

But with no local leagues, the number of people to rent the field is limited.

Though she grew up there, Ludovici has moved on from Micanopy. She lives in Newberry now, “where the sports programs thrive (as) they did years ago in Micanopy,” she said.

She’s sad to see how the programs have gone downhill and doesn’t understand the pockets of resistance in the town.

“Micanopy needs someone who actually cares about the youth and wants to push ideas that really matter to the families of Micanopy,” Ludovici said. “They need to find a way. Every other small town has done it.”

Jacqueline Saguin is a reporter for WUFT News. Follow her at @jackiesaguin on Twitter for news updates.
@jackiesaguin
Previous Three More After-School Supper Programs Opened In Alachua County
Next Blue Buckets Are One Solution For Trick-Or-Treaters With Autism

The Saturday after Hurricane Elsa poured onto Gainesville, the city’s mycology club was back out looking for mushrooms on its weekend forays through the forest.