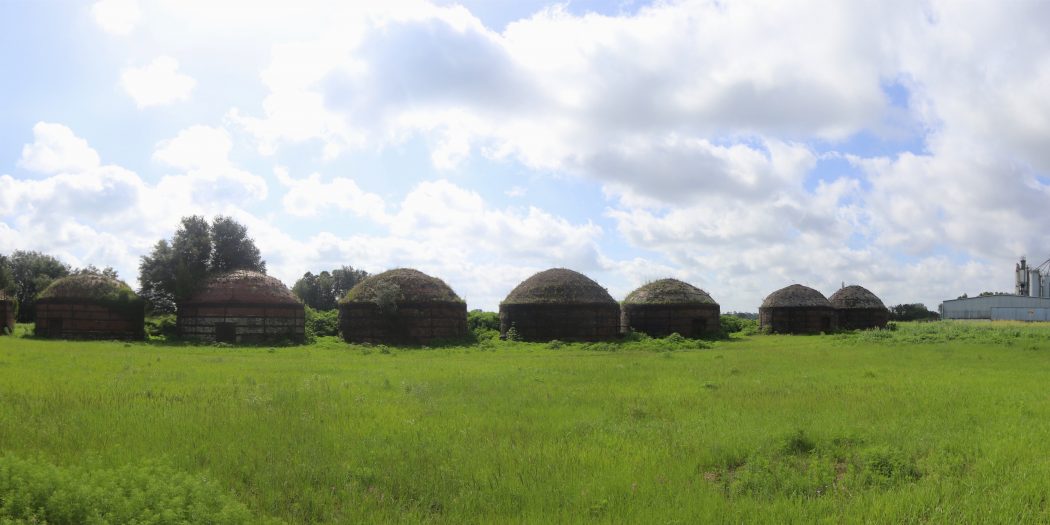 What Are Those Domes Outside Dunnellon?

This story is part of Untold Florida, a WUFT News series built from your questions. A reader named Caroline asked us about the origin and usage of dome-like structures on Route 41 near Dunnellon. Here’s what we found.

If you drive out on Route 41 going north from Dunnellon, there’s a good chance you’ve seen some dome-like structures sitting out in the middle of nowhere. These domes have caused quite a few passers-by to ask the question: ‘What are those?’

A small and informal survey of locals showed they weren’t entirely sure what the domes were either. Some had never heard of them, while others had a vague idea.

The domes are actually the remains of old charcoal kilns belonging to the Pioneer Charcoal Company. According to Andrew Murray, a member of the Dunnellon Historical Society, the kilns were built at a time when charcoal was in high demand.

“Basically, the Pioneer Charcoal Company had it set up, and it was after World War Two in the late ’50s, when people started doing a lot of charcoal barbecuing out in the backyard,” he said.

Murray says the large amount of oak in the area attracted the company to set themselves up as a small mining town.

“The oak trees that we have around here are turkey oak, happens to produce wonderful charcoal, and there’s just miles and miles and miles of it that were out here. And so the company set up there at Romeo, about four miles north of Dunnellon, and began harvesting the oak that’s out there,” Murray said.

The town of Romeo, where the kilns were located, had a neighboring mining town for phosphate, which was, perhaps appropriately, named Juliet.

Interested in more local mysteries like this? Above: WUFT’s Henry Coburn hosts our “Untold Florida” podcast, featuring an audio version of this story and an explainer about a lost Jewish utopia in north central Florida. Subscribe to the podcast through iTunes or Google Play.

“The period town people, back in the day, they basically read the Bible or they read the works of Shakespeare, and the rumor had it here was, during that time period, there was the two starstruck lovers, the agricultural town of Romeo and the little phosphate town Juliet.”

Unfortunately for the residents of Romeo, the town ended up going defunct due to a cold freeze in Florida.

“A lot of the towns were going into default for different reasons. The freezes killed out a lot of the smaller towns, the agricultural towns, because everything was based on oranges. In 1894-95, it literally killed off every orange tree in the area,” Murray said.

With oranges making up such a large part of Florida’s economy, the freezes caused the mining company to leave, too.

According to Sam Martsoff, director of Marion County Growth Services, the town no longer exists in the way others do, but it’s still there.

“It’s not a municipality like Ocala would be or Dunnellon, so they don’t have their own government and things like that, but it is a recognized place, it was on the map historically,” Martsoff said.

While the previous owners left, the property is still owned by another charcoal company: Donau Carbon U.S. However, Martsoff says there are no plans to reactivate these kilns any time soon.

“This whole newer part of this project migrated north from where the kilns were sometime after the ’60s and before more current times,” he said.

The company may be relying on newer forms of charcoal production, but these kilns will continue to spark wonder in tourists and passers-by.