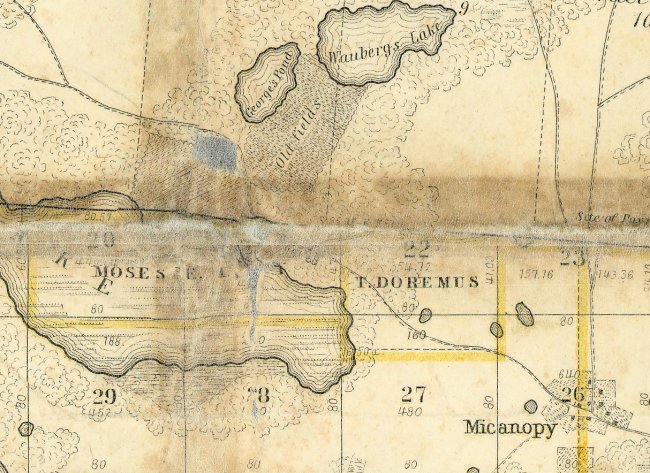 A close-up of the Arredondo Grant Map showing Micanopy and Moses Levy’s property by David H. Burr and Henry Washington in 1846. Levy’s land is located about 2 ½ miles northwest of Micanopy. (Public domain)

When The First Jewish Utopia In The U.S. Was Founded In Micanopy

A man named Moses set out to find a promised land for ostracized Jews in the alligator-infested land and waterways of North-central Florida in 1822.

Moses Elias Levy founded the first Jewish communal settlement in the United States a few miles northwest of modern-day Micanopy. Unfortunately, the precise location of the settlement, which was known as Pilgrimage Plantation, has been lost to time.

The only public monument is a blue Florida Heritage Site plaque on Micanopy’s main street.

C.S. Monaco, historian and courtesy professor of history at the University of Florida, recounted this history of Levy’s attempt to establish a Jewish utopia in Micanopy in “Moses Levy of Florida: Jewish Utopian and Antebellum Reformer,” published in 2005.

The award-winning book is a biography of a man who wore many, sometimes contradictory, hats: religious reformer, landowner, merchant, father, abolitionist and slave-owning agriculturalist.

Levy “established himself as one of East Florida’s largest landowners and continued to acquire vast tracts, eventually amounting to over 100,000 acres,” according to the book.

A thousand acres of his land was located near modern day Levy Lake, giving the lake its name, and this is where Levy established his plantation.

Monaco declined an in-person interview. However, according to the book, the plantation’s location was chosen “despite its considerable distance from any navigable waterway,” for its proximity to the freshwater lake and the richness of the soil, which came from the alligator feces and vegetation decomposition.

Proximity to Micanopy factored into Levy’s location choice because the town was a trading hub at the time, according to the book.

Monaco said, via email, Levy’s associate succeeded in bringing five Jewish families to the plantation. Both of Levy’s sons, Elias and David – who later became the first senator of Jewish descent in Congress – joined their father on his land.

“We simply don’t know how many additional Jewish settlers came afterwards,” Monaco said in an email.

Although Pilgrimage Plantation settlers shared their religion and a communal identity, the community was unusual for a utopia in that the families all had separate homes and tracts of land – which Levy provided.

The five families and the Levys were not the only ones living on the 1,000 acres.

“Most of the work at Pilgrimage was accomplished by slave labor, and, of the thirty persons employed… only eight or nine were white,” according to the book.

While Levy owned slaves, he was an abolitionist who believed in gradual emancipation and wrote a paper anonymously on his views.

“His idea of transitional training, or apprenticeship, in which Jews, Gentiles, and slaves would improve their nature and eventually live in agrarian harmony, was also central to his thought,” according to the book.

Mitchell Hart, a professor of Jewish history at UF, said owning slaves, even as a Jewish community, was completely normal during this time. However, having a non-traditional Jewish settlement during the early 19th century was only possible in the United States.

“Because of the constitution and that you couldn’t do this in Europe, this makes perfect sense in America,” Hart said.

The religious freedom of the U.S. made utopias a popular trend, although few of them lasted long, according to the book.

Pilgrimage Plantation ended in 1835 during the Second Seminole War when it burned with estimated $25,000 in damages, according to the book.

The U.S. Army ordered Micanopy, which had been turned into a fort for the war, to be burned to the ground, so the enemy could not obtain anything of value.

“I could not uncover where the settlers went to after the destruction in 1835,” Monaco said via email.

Levy sold the slaves to a friend who lived in St. Augustine, Monaco said.

Monaco said SouthArc Inc., an archaeological and environmental consultant, tried to find evidence of the plantation near Levy Lake 17 years ago but found nothing.

Monaco still hopes to have more of the area around the lake to be searched.

“A different archaeologist that I contacted was ready to do a survey on this land, but the landowners will not allow this,” he said.

Because of the burning of the settlement and town, the Micanopy Historical Society Museum does not have much on the plantation or Levy, said Birgitta Kimura, a volunteer at the museum.

The museum’s only information about Pilgrimage Plantation are Monaco’s book about Levy and a map showing where the settlement was believed to have been.

The dispersal of the settlers after the destruction are major factors as to why Levy and his Jewish settlement are not well known, but the biggest one could be that he hated publicity.

“He limited his own publicity, generally avoided newspaper coverage, and was vigilant against what he perceived to be the sin of vanity,” according to the book.

Blake is a student reporter for WUFT and can be reached by calling 352-392-6397 or emailing news@wuft.org.
@BlakeTrauschke
Previous The Point, Feb. 20, 2019: State Lawmaker Lashes Out After WUFT Reporter Questions His Donors About Blackface Photo
Next Where In The World Is John Belushi? The Disappearance Of A Melrose Landmark