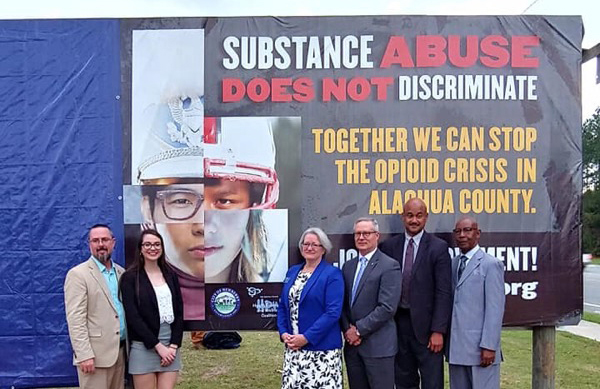 Newberry city officials stand in front of the unveiled billboard that will greet drivers as they enter the city. (Courtesy of Jordan Marlowe)

HPW and the task force’s drug take back takes place from 10 a.m. to 2 p.m at the Newberry Fire Station. HPW’s program director Francellette Garcia hopes similar take back events will happen every six months to reduce the prevalence of expired or dangerous medications for those who don’t know how to dispose of them properly.

“Especially youth don’t realize how dangerous it is because they are looking for things to do,” Garcia said.

With help from the county-wide task force, the take back in Newberry is not the only one. There will also be Take Back stations at the Gainesville Senior Recreation Center and Hitchcock’s Market in Hawthorne, said Joy Glanzer, county task force co-chair and former Newberry commissioner.

Before the take back, the task force produced a billboard at the entrance of Newberry warning of the dangers of opioids.

The city commission created its task force, which is made up of six people plus Mayor Jordan Marlowe, to spearhead projects that will help prevent opioid abuse in the city. Opioid addiction, which includes illegal drugs like heroin and prescription pain killers like OxyContin and Vicodin, has reached epidemic levels throughout the United States due to the high prescription rate.

According to the Centers for Disease Control and Prevention’s 2017 data, doctors in Alachua County wrote 65 opioid prescriptions for every 100 people — one of the highest rates in the state.

Members of the task force plan to focus on prevention rather than treatment because the medical community is better equipped for rehabilitation, Marlowe said. He wanted the task force to raise awareness about the dangers of opioids for local residents.

“It seemed to be a natural first step in the process,” Marlowe said. “We need help and we need someone to guide us.”

Public schools provide a route for the task force to educate younger Newberry residents, Marlowe said. The task force wants to focus on students in fifth grade because the 2018 Florida Youth Substance Abuse Survey suggests low-performing students in this age group are susceptible to drug abuse, he said.

They also appointed a liaison to both the Gainesville City Commission and Alachua County School Board to advocate for a unified and comprehensive approach towards raising awareness. Marlowe hopes that other municipalities throughout the county will follow Newberry’s example and form their own task forces to better utilize their individual strengths.

For task force member Naim Erched, Newberry’s size can work to its advantage. As a small community, the task force can craft more individualized approaches.

At their first meeting, the task force members were very eager to get to work raising awareness.

“As excited as we are, we realize that’s how mistakes happen, so we wanted to sit down to plan first,” Erched said.

Opioid addiction has affected many of their lives. As a teacher at Newberry High School, Marlowe experienced several students dying due to overdose or suicide related to opioids. Erched helped friends who struggled with addiction, and Glanzer said she could immediately name five people who died from an overdose.

The task force began at the start of HPWs two-year analysis of addiction in Alachua County, and its findings will hopefully show a decrease in addiction now that they’re taking action, Marlowe said. Ultimately, their goal is to stop the next generation from becoming addicted to painkillers.

“We’ve got to stop it. Our kids are dying,” Glanzer said. “These are real people who are part of our families who are dying because of the prevalence of opioids.”

Adam Turner is a journalist in the WUFT newsroom. He can be reached at 954-654-0725 or on Twitter at @fladam98.
@fladam98
Previous Apr. 22, 2019 Morning News In 90
Next Gainesville’s Independent Bookstores Look To Beat The Odds Against Challenges From National Cyber Chains